The Southern Illinois University Board of Trustees will welcome special guest speaker Charles Neblett at its annual Diversity Excellence Lecture & Award Ceremony at the Student Center Auditorium at 6 p.m. Wednesday.

The event is open to the public and begins with a catered reception in the Student Center’s International Lounge. Neblett’s lecture will start after the reception at approximately 7 p.m.

Neblett received a Doctor of Humane Letters from SIU Carbondale in May. He came to SIU Carbondale in 1959 where his activism had a lasting impact on changing campus culture, particularly his efforts in convincing then SIU President Delyte Morris to end the segregation of student housing.

In 1961, Neblett joined the Student Nonviolent Coordinating Committee to organize black voter registration.  He later became a member of “The Freedom Singers” which sang at protests, marches and other activities in 40 states during the civil rights movement. Neblett was among those to join Dr. Martin Luther King, Jr. during the March on Washington and led participants in song after his “I Have a Dream” speech. He also participated in the 1965 March from Selma to Montgomery and the 2001 Million Man March.

Neblett became the first African American magistrate in Logan County, Kentucky in 1989.  His career advocating for equality has also earned him the Freedom Flame Award in Selma, Alabama in 2010 and a place in the Kentucky Civil Rights Hall of Fame. Currently, Neblett acts as Founder and President of Community Projects, Inc. along with his wife, Marvinia Benton Neblett.

This is the third year for the lecture and presentation of the Diversity Excellence Award, which honors an individual or group that encourages the SIU System community to think and practice equity, diversity, and inclusion in more creative and collaborative ways. 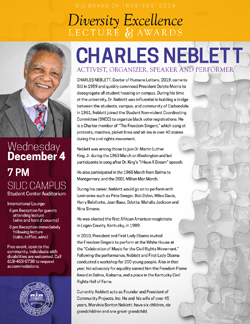