Politics, Friendship and Betrayal: ‘A Month of Julius Caesar’

CARBONDALE, Ill. —A fresh take on the classic “Julius Caesar” is in motion with a whole month of activities at Southern Illinois University Carbondale.

The excitement has already started across campus with film screening, class discussions and a Caesar Trivia night. These events will crescendo with a lecture by the internationally renowned director and Shakespeare scholar Avraham Oz on May 1 to be followed by the Department of Theater’s staging of “Julius Caesar” May 2-5, directed by Professor Segun Ojewuyi.

Ojewuyi is planning a bold and original interpretation of “Julius Caesar,” setting it in contemporary U.S. politics.  His working tagline is, “the audacity of hate.”

Ojewuyi is a theater director, critic, actor, and scholar who has worked in Africa, Europe, the Caribbean, America and the Mediterranean. Besides SIU, he has taught at Yale, the University of Lagos, Nigeria, and Rowan University, New Jersey. Local audiences may remember Ojewuyi’s magnificent production of August Wilson’s “Gem of the Ocean” last year.

‘Fashion it thus: The battle of narratives and political assassination’

Oz is the world’s leading translator of Shakespeare in Hebrew and a peace activist. He is Professor Emeritus of Theater at the University of Haifa, and currently teaches in and directs at the Beta School of Performing Arts, Tel Aviv. He has translated numerous plays and operas, including Shakespeare, Brecht, Pinter, Turini, Shafer and many others.

Taking his cue from Brutus’ self-justification for assassinating Caesar, Oz has titled his talk “Fashion it thus: The battle of narratives and political assassination.”

The University Honors Program has programmed Professor Oz’s lecture as the second in the Charles D. Tenney Distinguished Speaker series of 2019. The series is named after Charles D. Tenney, who joined the English Department in 1931 and played a significant role as the provost in transforming SIU from a teacher’s college into a research university.

Jyotsna Kapur, director of the university honors program, sees the retelling of the classic story as a fitting component to the esteemed lectures.

“A contemporary rethinking of ‘Julius Caesar’ fits in well with the legacy of the Tenney lectures and their ambition to bring the university together in reflecting on big problems, concerns and themes that confront us,” she said.

A final dialogue will conclude Oz’s presentation, and is set for 12:30-1:30 p.m. on May 3 at the honors conference room in Morris Library. Students and interested participants can enjoy a Caesar salad and discuss the key elements from the lecture.

Besides the Department of Theater and the University Honors Program, the month of Caesar is a collaborative venture between the Colleges of Liberal Arts and Mass Communication and Media Arts; Morris Library; Departments of English, Classics, and Cinema and Photography; and three RSOs — the Africana Theater Lab, Classics Club and the Honors Assembly.

Early in the month, the Classics Club hosted a film screening of “Julius Caesar,” directed by Joseph L. Mankiewicz in 1953, with discussion led by professors Walter Metz (Cinema and Photography), Anne Fletcher (Theater), Mont Allen (Classics), and Patrick McGrath (English). A surprise addition was Briana G. Sitton, who is pursuing an MFA in the School of Music, singing from “Giulio Cesare “(1724), the opera by George Frideric Handel.

Oz will speak at 4 p.m. on May 1 in the McLeod Theater. The presentation and following reception are free and open to the public.

The production of “Julius Caesar” is set for May 2-5 at the McLeod Theater.

Oz will also present the regular Sunday pre-matinee lecture for this SIU Theater production. Titled, Translating Shakespeare, it will be held at 1:00-1:45 p.m. in the Christian H. Moe Laboratory Theater on Sunday, May 4 prior to the 2:00 p.m. matinee and final performance of Julius Caesar.

Tickets for the regular productions can be obtained several ways

A month of Julius Caesar 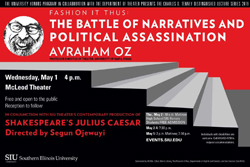