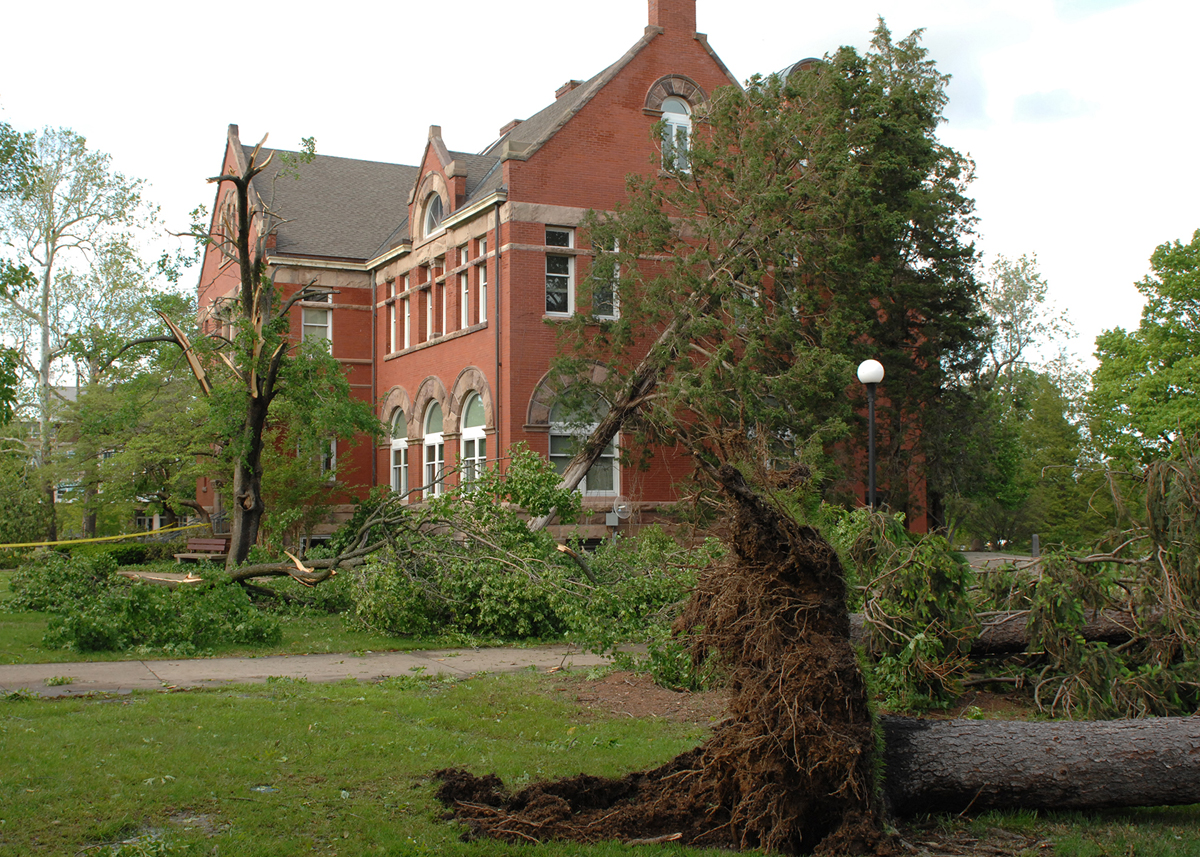 Prepared for storms, emergencies – SIU Carbondale has earned StormReady designation from the National Weather Service for its proactive response to emergency storm preparedness. A vivid preparedness reminder the May 2009 derecho that caused nearly $9 million in damage to facilities, research and grounds and uprooted and destroying more than 1,000 trees in the campus lake and Thompson Woods areas, and hundreds more across the rest of campus, such as these near Wheeler Hall. Part of the emergency upgrade included the installation of eight strategically placed speakers throughout campus. The speakers can also function as a public address system. (Photo by Russell Bailey)

CARBONDALE, Ill. – With the May 2009 derecho that caused nearly $9 million in damage to facilities, research and grounds on campus still a vivid memory for many, the National Weather Service on Wednesday will recognize Southern Illinois University Carbondale for its proactive response to emergency management storm preparedness.

The StormReady designation shows SIU Carbondale has taken “much initiative” toward the safety of students, faculty and staff, said Rick Shanklin, acting meteorologist in charge with the National Weather Service in Paducah, Kentucky.

“SIU already met most of the StormReady requirements from having multiple ways of monitoring severe weather to alerting everyone on campus for impending severe weather, as well as having robust plans in place for sheltering,” Shanklin said. “The May 8, 2009 derecho certainly provided some impetus and experience in working toward the StormReady requirements.”

Along an elite group of higher institutions

Brad Dillard, director of SIU’s Plant and Service Operations, noted that just 255 universities and colleges nationwide, including 18 in Illinois, are StormReady. The designation is for three years and is renewable.

“We have the appropriate processes and procedures in place to warn the community and respond to any storm emergency that would occur,” he said.

The designation means the university has met or exceeded all requirements for StormReady, from receiving alerts for severe weather to distributing emergency weather alerts to everyone on campus, Shanklin said. In addition, there are five other requirements from planning to training and preparedness, he said.

Over the last six months, university officials, in combination with Department of Public Safety and PSO, worked with the National Weather Service, to comply with requirements for storm ready community designation, Dillard said.

The review included looking at:

Dillard notes much of the university’s coordinated emergency preparedness was in place prior to the derecho. The outdoor emergency notification system received a significant upgrade in 2014 when eight strategically placed speakers on pods replaced existing sirens and provided complete campus coverage. The solar-powered speakers allow for wireless communication equipped with batteries so that they are protected against power outages. The project cost about $500,000.

The speakers also function as a public address system. There are 13 prerecorded messages that alert the campus to a threat or dangerous situation, along with the capability to broadcast live messages to any combination of speakers or an individual location.

“In the old days of the civil defense sirens it was all or nothing,” Dillard said.

SIU’s emergency notification system can be activated from three locations:

“That overlap was very important to getting this certification,” Dillard said. “You don’t want to have one point of contact and the power goes out and you can’t get the word out to the campus community.”

Every time there is a potential for severe weather in the area, Dillard has discussions with Benjamin Newman, DPS director, and the Carbondale Fire Department. The fire department is responsible for activating and overseeing storm spotters. In the event severe weather watches or warnings are issued, the city proactively reaches out to the university to find out what events are underway or planned on campus, Dillard said.

Dillard, who was associate director at the time and led the university’s response, recalls the success dealing with the storm’s aftermath, including holding commencement outdoors at McAndrew Stadium the next day, was due to the hard work by people on campus. That came through previous years of tabletop exercises and disaster drills.

“We found out after the derecho absolutely that these table top exercises and drills are very realistic,” he said. Dillard recalled university officials were able during the first 72 hours after the storm to resolve numerous problems in a more timely fashion due to working through similar issues during drills in previous years.

“Everybody did their part”

The storm also reinforced the belief that as a university SIU was much more prepared than other entities and the value of yearly drills and exercises, Dillard said. That continuing preparation also paid off in gaining the designation.

Severe weather season is upon us

While severe weather can happen at any time during the year, about half of all tornados in Southern Illinois occur over a 10-week period from late March through early June, Shanklin said. 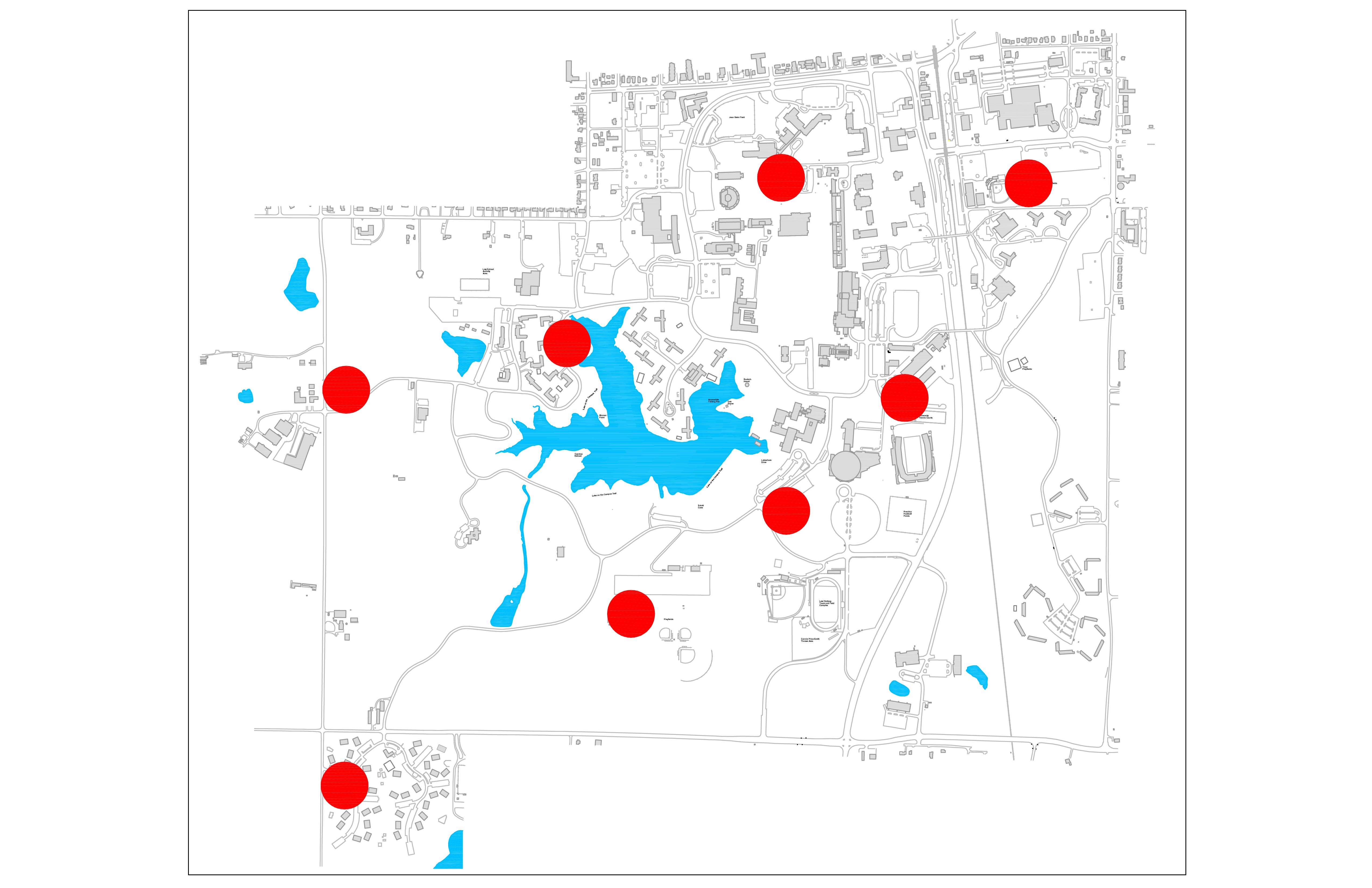