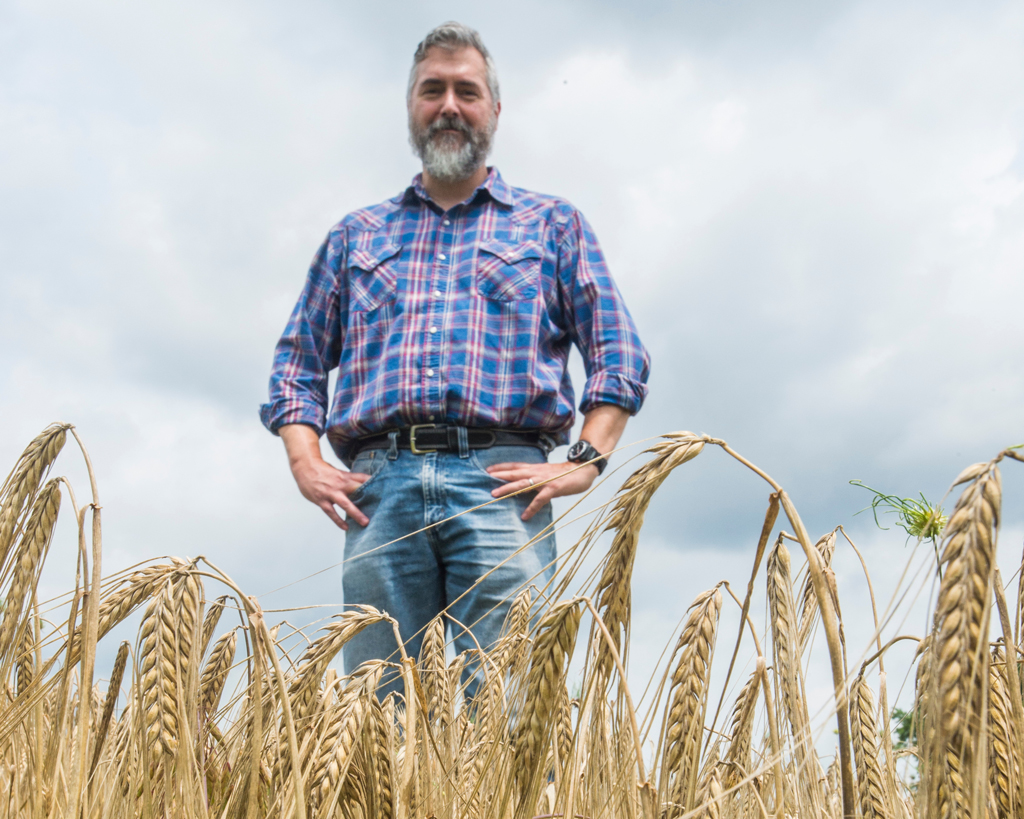 Matt McCarroll, director of the Fermentation Science Institute at Southern Illinois University Carbondale, stands in a field of barley planted on university property last fall in anticipation of a new malting facility to be delivered to the FSI this year. The malting facility is just one of several major new developments at the fledgling program, which is aimed at training the professional brewers, vintners and distillers of tomorrow for key jobs in those growing industries.  (Photo by Steve Buhman)

CARBONDALE, Ill. – Soon you may be able to sit back and enjoy a nice tall pour of a flagship beer brewed by students at Southern Illinois University Carbondale.

An SIU beer is just one of the big things on track for SIU’s Fermentation Science Institute. The fledgling, interdisciplinary program is aimed at training the professional brewers, vintners and distillers of tomorrow for key jobs in those growing industries.

Officials plan the SIU brew as an offshoot from a new commercial production-scale brewery that they hope to set up in conjunction with the FSI. In addition to its primary business function as a brewery, the production facility would both be available as a teaching facility and provide regional breweries with contract production services for those wishing to supplement their current production capacity.

Along with that effort, a shiny new distillery to make spirits is already on-site and awaiting installation at the FSI, located in the McLafferty Annex on the SIU campus’ far west side.

The distillery, donated by Artisan Still Designs, can produce any type of distilled beverage, including whiskey, vodka or gin, depending on which process the distillers choose.

Plans also call for a state-of-the-art sensory laboratory and teaching kitchen there, funded by a donation from Fae Minor McGill. The project is a collaboration with SIU’s hospitality management program and Department of Animal Science, Food and Nutrition.

A new malting facility, which should be built and shipped to the FSI late this fall, will serve as a training and demonstration site aimed at sparking a new industry in Illinois that will benefit brewers and farmers in the state.

Improvements a boon for students

Officials are aiming for all the new equipment, renovations and facilities to be in place in 2019, greatly expanding the opportunities for students to learn about each facet of the fermentation industry. All four projects will occupy roughly the same immense space at the McLafferty Annex, sharing infrastructure such as power, plumbing, heating and cooling.

With all this activity hanging in the air, officials are examining the best, most efficient way to move forward.

“We have several projects  going on simultaneously, so we’re trying to coordinate and get as much infrastructure done together, rather than here and there,” said Matt McCarroll, director of the FSI and professor of chemistry and biochemistry at SIU.

Demand for new brewers, vintners and distillers, coupled with SIU’s location amid Illinois’ prime wine and brewing country, drove the university to establish the program.

In early 2016, the Illinois Board of Higher Education gave SIU the go-ahead to create a new bachelor’s degree in fermentation science. The program is highly interdisciplinary, with faculty from chemistry, agriculture, plant biology, engineering, hospitality, microbiology and other programs involved, and is one of just four programs in North America recognized by the Master Brewers Association of the Americas.

Along with the new projects, the FSI facility also includes classroom space, an analysis laboratory certified by the federal Tax and Trade Bureau, and pilot scale brewing equipment. The program serves as a resource for local fermentation industries, as well.

Blueprints are now on the table for the sensory lab and teaching kitchen while an equipment manufacturer continues building the program’s custom-designed pilot malting facility.

This month, the university also will harvest its first crop of barley, planted last September in anticipation of the pilot malting facility. A separate spring planting is set for harvest in late July or early August.

Looking for a brewer

Earlier this month, the university put out the official call for commercial breweries who might be interested in cooperating with the program and wish to use the production-scale brewing facility, which would be capable of producing 3,000 to 10,000 barrels of beer annually. The “request for information” was published through the state procurement bulletin for the purpose of identifying interested parties.

“The real goal is to have a brewery come in with a fairly large-scale production capacity that will also act as a demonstration tool for the program,” McCarroll said.  “At this scale, brewing is really process engineering, and students need exposure to the equipment and control systems that are standard in the industry.

The brewery would operate with its own employees, but FSI students might also work there as student workers or interns, he said. The underused capacity of the brewery might also be utilized for contract brewing, including for production of an SIU beer.

Having an actual on-site industrial scale brewing facility would be a major coup for the FSI, McCarroll said. The program would then cover the entire gambit of brewing, from bench-top to industrial scale production.

“It really sets us up as a world-class program,” McCarroll said, adding plans call for having the facility up and running by July 1, 2019.

Learn more about the Fermentation Science degree program at fermentation.siu.edu