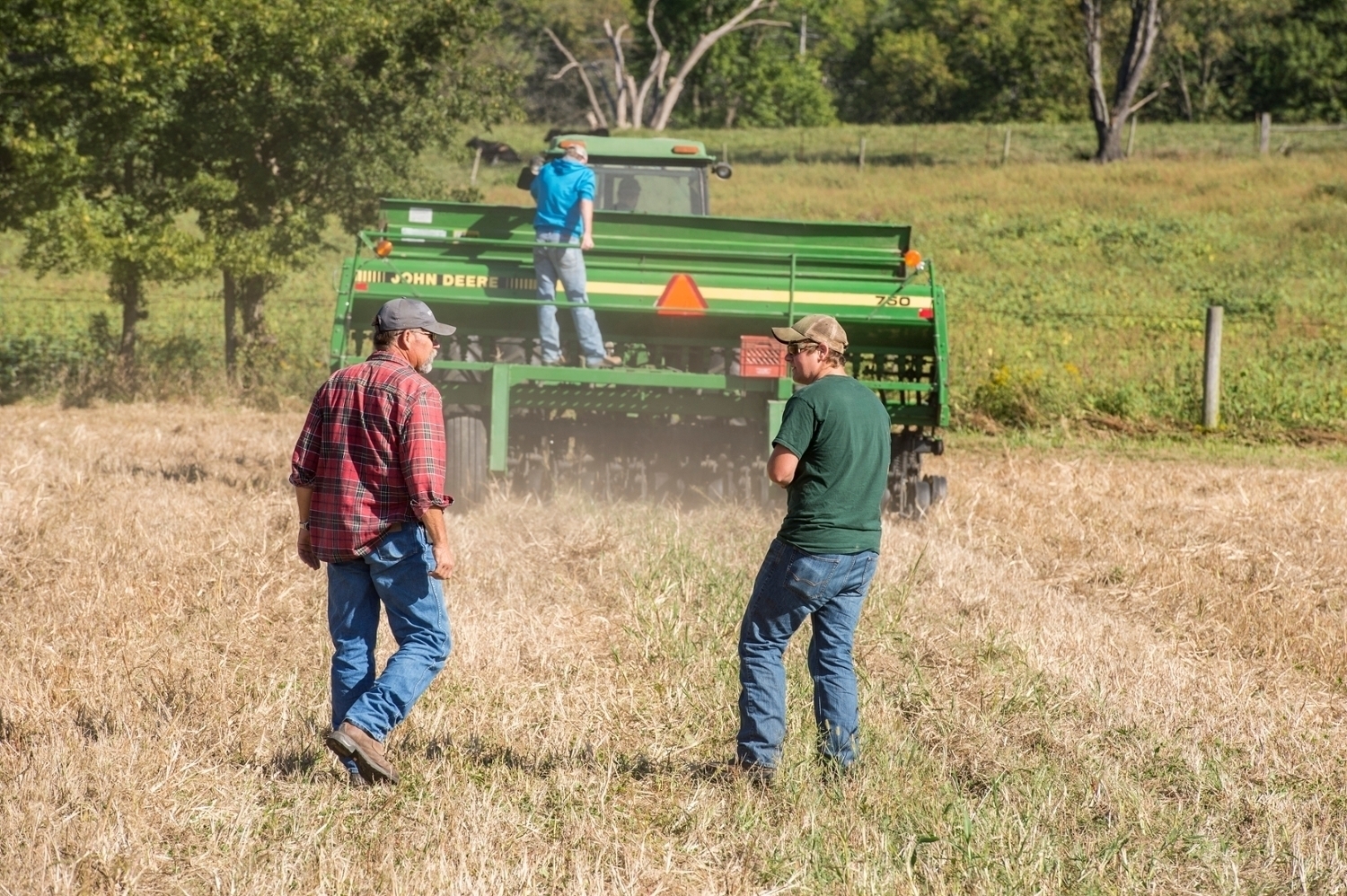 Workers at Southern Illinois University Carbondale help plant barley in a field on University Farms during the last week of September. The barley will provide fodder for a new pilot malting facility at the Fermentation Science Institute at SIU. With help from at $120,000 grant from the U.S. Department of Agriculture, the FSI is purchasing the facility, which will serve as a training and demonstration site aimed at sparking a new industry in Southern Illinois that could benefit of brewers and farmers in the state. (Russell Bailey photo)

CARBONDALE, Ill. – Which came first: The barley or the beer?

The practice of cultivating the ancient cereal grain stretches back to the very dawn of civilization, which itself had much to do with fixed farming operations.  But researchers still aren’t sure if the people of old made beer because of their ability to grow barley, or if they grew barley so they could make beer.

Flash forward several millennia and spurred by the explosive growth in modern microbreweries – as well as a growing aspect of that industry knowns as “craft malting” – barley cultivation and malting are now coming to Southern Illinois University Carbondale’s Fermentation Science Institute.

With help from a $120,000 grant from the U.S. Department of Agriculture, the FSI is purchasing a pilot malting facility. The facility will serve as a training and demonstration site aimed at sparking a new industry in Southern Illinois that will benefit brewers and farmers in the state.

The malting process is critical to making alcohol drinks such as beer and whiskey. The process causes the grain to germinate, producing enzymes that break starch into the sugars that the young plant lives on until it can survive through photosynthesis. In the brewing or distilling process, these sugars are consumed by yeast during the process of fermentation. The yeast then excrete alcohol.

The FSI’s custom-designed system will be able to produce malt at a quarter-ton batch size, said Matt McCarroll, professor of chemistry and biochemistry and director of the FSI. He said he hopes that the FSI’s pilot malting facility will be the lynchpin connecting willing local barley famers with brewers who want locally grown grains, potentially creating a new industry in the state.

“We will operate it as an incubator type model, where local farmers and brewers will be able to bring in barley they have grown and have facility staff and our trained students transform it to a value-added product,” McCarroll said. “This will allow regional breweries to produce an Illinois-made product.”

“It will be on a small scale. We are not intending to be the maltster for Southern Illinois,” McCarroll said. “It’s meant to show it can be done here, and that we can train people to do it.”

Barley formerly was grown regularly throughout most of the United States, both for brewers and as a feed product. For the past 30 or more years, however, brewers have grown most of their barley in northern areas, such as North and South Dakota, Idaho and Canada, owing to the later springs and shorter growing seasons and the dryer climate being more favorable to those varieties.

But in recent years, the locavore movement has led a few microbrewers to begin seeking out locally grown and malted barley. To learn more about this trend, McCarroll recently traveled to Riverbend Malt House in North Carolina, which conducts classic “floor malting,” a labor-intensive, traditional means of malting.

In floor malting, the grains are steeped in water several days while carbon dioxide is bled off and oxygen is pumped in. After steeping, the grains are spread out on the floor and kept at the proper temperature and humidity while also being regularly hand-raked and shoveled, to prevent grain sprouts from creating a tangled mess. After the proper amount of time, the grain is loaded into a kiln and brought to 175 degrees, killing the seed but leaving the sugars that germination has created intact.

SIU’s automated facility will be able create 500 pounds of malt per batch. The single-vessel system will conduct steeping, germination and kilning all in one tank, with mechanical augurs inside to perform the functions of rakes and shovels.

“It will actually give us much better control over the process so that there is less dependence on individual skill,” McCarroll explained.

Among the FSI’s core missions is training brewers, vintners and distillers for those burgeoning business sectors, while also promoting, educating and assisting local wineries, breweries and distilleries. Bringing the malting process “in house” seemed like a natural fit, McCarroll said, and it also could help local farmers diversify their crops.

The SIU barley will provide fodder for malting operations. But local farmers and brewers also will be encouraged to bring in their own grain for malting. Eventually, with training on the equipment, they may be able to largely oversee the entire operation, from field to malt, McCarroll said.

McCarroll hopes to have the new facility installed sometime next spring or early summer.