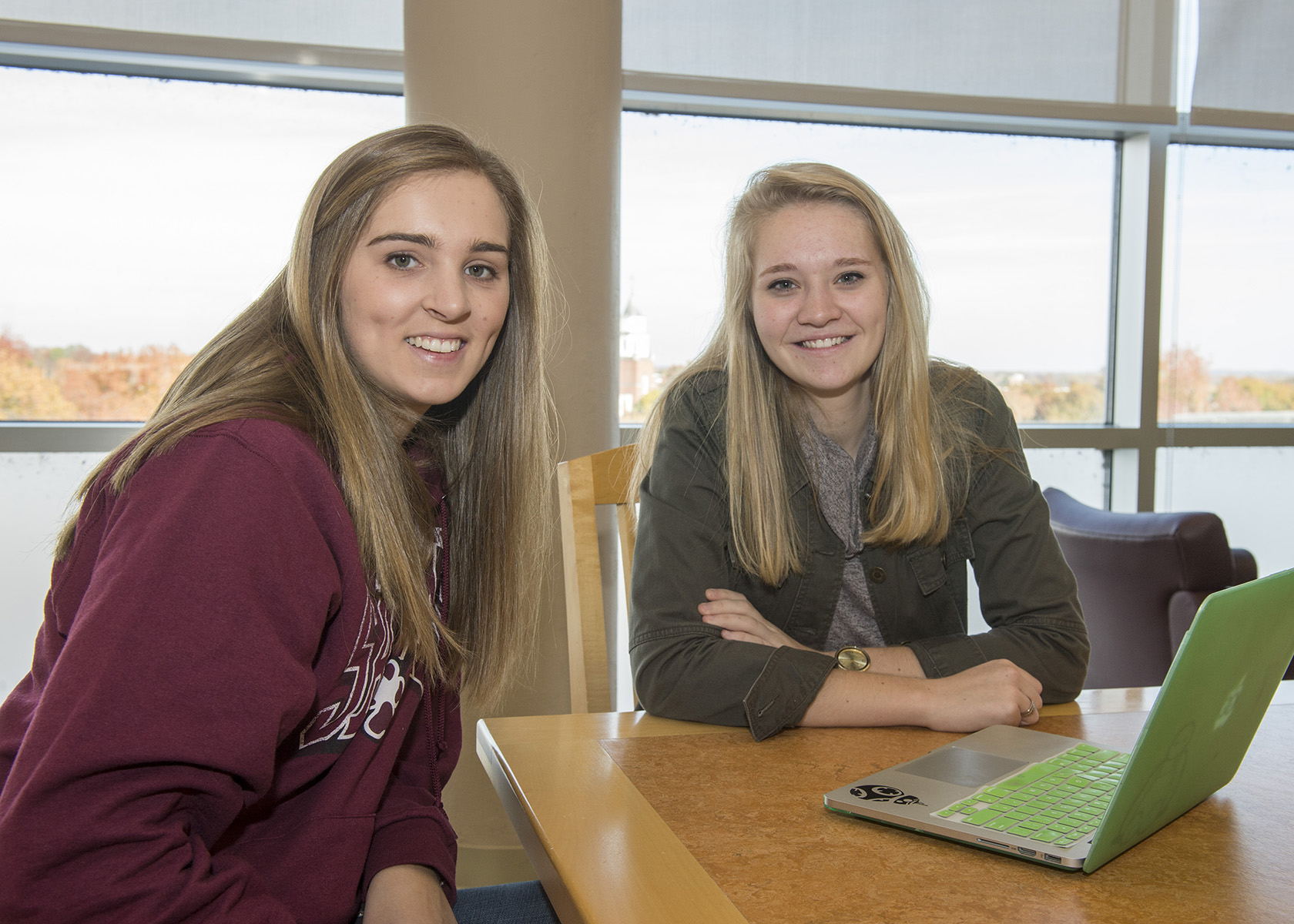 Putting together the finishing touch – SIU Carbondale students Marcia Kuhlman, left, and Malea Bailey, right, are putting the final touches on their student-produced documentary “2.38 – A Glimpse Into the Eclipse. The 35-minute documentary chronicles the Aug. 21 total solar eclipse on campus. The screening is at 7 p.m. Dec. 1 in Morris Library’s John C. Guyon Auditorium. (Photo by Russell Bailey)

CARBONDALE, Ill. — As Southern Illinois University Carbondale students Malea Bailey and Marcia Kuhlman started to chronicle the thoughts and impressions of incoming students about the fall 2017 semester and the Aug. 21 eclipse, their plans for short social media clips soon evolved into a documentary.

“Originally it started through New Student Programs and it just grew,” said Bailey, who with Kuhlman, is putting the final touch on “2.38 -- A Glimpse Into the Eclipse.” The documentary screening is at 7 p.m., Dec. 1, in Morris Library’s John C. Guyon Auditorium. The screening is free and open to the public.

Project “grew on its own”

“It just grew on its own because of how everyone’s stories came together. We felt almost obligated to do it because of how enthusiastic people were with the stories they shared,” Bailey said.

The film’s tag – “Two minutes. Thirty-eight seconds. Thirty thousand people. One community” sums up the unity that Bailey and Kuhlman saw across campus that day. Working with New Student Programs (NSP) in documenting new student move-in and other activities before the semester began on Aug. 22, Bailey and Kuhlman also assisted the university’s social media campaign with the 2017 eclipse coverage.

“The idea of the documentary came as the day of the eclipse unfolded,” Kuhlman said. “We initially planned on maybe making something small and giving it to NSP for promotional things … but as the day went on and we met so many people with so many amazing backgrounds, we wanted to do something bigger. Thankfully, everyone involved in the day and in helping us acquire all of our footage has been incredibly supportive.”

Getting a complete picture

The documentary includes interviews with Chancellor Carlo Montemagno; Gena Stack, assistant director of New Student Programs; and Bob Baer, a specialist with the Department of Physics and eclipse committee co-chair.

“We just tried to encapsulate as much as we could from that day and that week and to show how it touched everybody. ; that is just wasn’t the 2:38 of totality,” Bailey said. “It was an entire weekend – the entire experience. It was the years SIU has been preparing for this.”

One of the documentary’s challenges was time, Kuhlman said.

“This project, being independent, has been very fluid and adapting as we go, and I personally underestimated the work and time that would have to be poured in to get the caliber of project that we are putting out,” she said.

This project is separate from the eclipse documentary that the College of Mass Communication and Media Arts (MCMA) is producing for the university. The MCMA project is set for screening in late January.

Bailey, who is from Medora, about 20 miles north of Alton, is a junior majoring in radio, television, and digital media with a specialization in video production. Kuhlman is a junior in physiology from Campbell Hill. They started with New Student Programs as orientation leaders a year ago, showing prospective students and their families around campus.

Bailey and Kuhlman used SIU Snapchat to post activities on campus prior to the eclipse. The experience allowed them to make connections with many different teams of researchers and they received feedback and encouragement for the documentary project, Stack said. Both did a good job networking with the researchers and professionals on campus for the eclipse.

“This is a great way to document the experience,” Stack said. “It was such a unique thing to happen on campus — to be able to showcase not only the event itself and the way the university performed, but to also showcase the talents of our students.”

Caleb Gomes watches a few clips of a documentary and makes notes on a computer, like so many college students do today in this post-computer age. Gomes’ notes, though, become music. Read more...