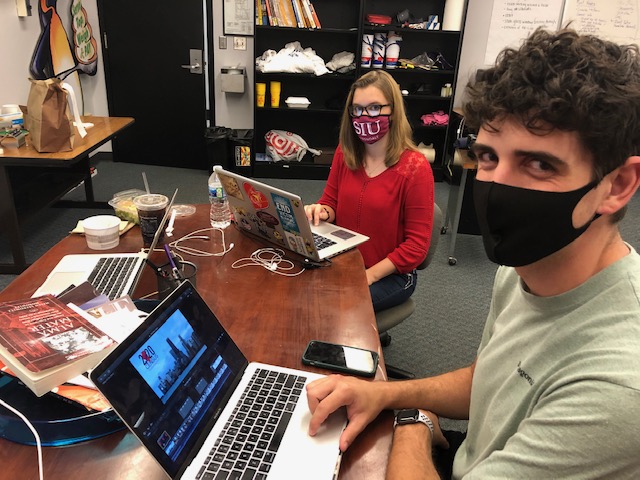 CARBONDALE, Ill. — As the deadline approaches, a student-run, full-service advertising agency at Southern Illinois University Carbondale is working with a Chicago-based non-profit health center organization to promote completing the 2020 Census to Hispanic markets.

The five students working on the project since August developed a 60-second radio spot and a 30-second television ad that will play on Univision and social media posts for CHP’s Facebook page.

Samantha Oxford, AdLab’s president, said the opportunity is valuable in myriad ways, particularly because it is associated with important issue. With most of AdLab’s clients based out of Southern Illinois, working with CHP is an opportunity for AdLab to go into other regions.

“I was excited to expand our client base into Northern Illinois, said Katherine Alleman, a senior in geography with a minor in both advertising and environmental studies. “This is a great opportunity for AdLab and for the students to debut their skills to a wider audience. This is our first bilingual client, which has been an interesting challenge for our team.”

Shawn Davis, a journalism senior specializing in advertising from West Frankfort, headed the project’s creative production and media buy. He loves the project.

“I’m really happy we’ve been able to take it on,” he said. “Underrepresentation on the Census deprives already disadvantaged communities of important resources that they depend on, such as healthcare. I’m really happy we’re able to do the work that has a positive community impact like this.”

According to Eleace Sawyers, CEO of Community Health Partnership of Illinois, these university partnerships “add value to the work that we do in the community.”

The possibility for Saluki AdLab to be involved with the campaign began as CHP was vetting marketing services and saw in April, AdLab placed third in a national district advertising competition, said Jina Ramirez, CHP’s director of operations.

“We like to work with educational institutions in Illinois to recruit volunteers and collaborate on many projects, so it was a natural fit,” she said.

The organization is “very happy” with AdLab’s quick work and high-quality turnaround for a time-sensitive project and looking forward to future collaborations, Ramirez said.

“We are also happy to access the resource that AdLab already had in place to reach and work with both Univision and WGN,” she said.

Oxford, a journalism senior specializing in advertising from Elizabethtown, noted she had never worked on radio and television advertising before this project.

“It opened my eyes to how important each step of the process is and that good teamwork is crucial,” she said. “We learn something new every day and with each client.”

One of Davis’ roles in the project has been securing air space for advertisements.

“I love it because I’ve been able to learn so much about how the process works, but at the same time it’s been uniquely difficult given our tight deadline. It’s been a ‘learn-fast’ situation and while I’ve found it difficult, it is also the part I’ve enjoyed the most.”

Alleman, who is from Granville, Illinois, agreed. With the project’s quick turnaround, she learned to be flexible with her time. Additionally, she noted it has been helpful to work with a non-profit organization and learn to work efficiently with resources.

Project collaboration was done remotely; CHP is in northern and central Illinois and 300 miles away. However, Alleman noted Saluki AdLab competed virtually this past spring in the National Student Advertising Competition.

Oxford noted what she enjoyed the most was also the most difficult. She had never worked on a prior project where the most important aspect was that it was bilingual, she said.

“I really enjoyed hearing our words come to life in both English and Spanish,” Oxford said. “On the other hand, it was difficult to review our work when it’s in a language we don’t speak fluently. My main focus for this collaboration was social media. This really opened my eyes to a whole new side of advertising.”

A part of the School of Journalism, Saluki AdLab provides students with professional experience and exposure by applying the skills and theory from the classroom to benefit local, regional, and national organizations and businesses as well as strengthen university-community relations. There are now 12 students who are part of the RSO with more interested, Alleman said. Several of the students have majors outside of advertising or journalism-related fields.