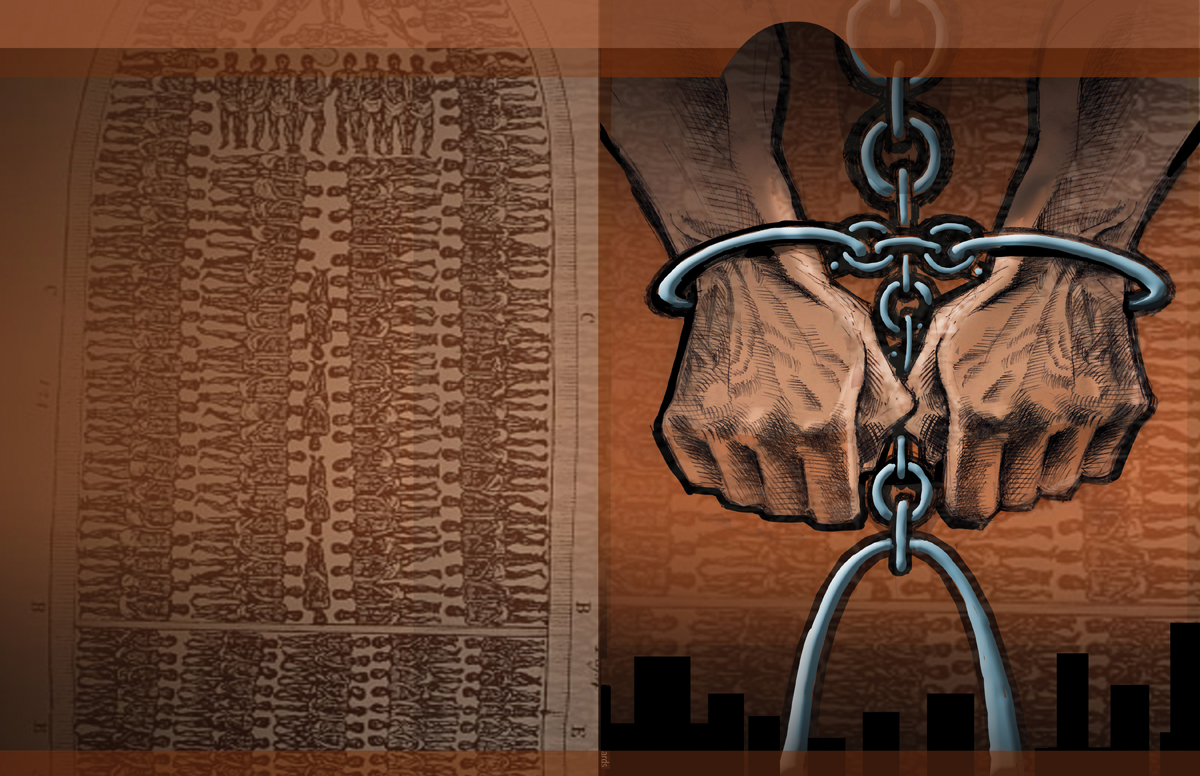 CARBONDALE, Ill. — The Gateway Journalism Review, a Southern Illinois University Carbondale School of Journalism publication that analyzes mass media in the Midwest, has marked its 50th anniversary with an eye-opening and timely issue, “The 1857 Project.”

The edition offers a historical retrospective on slavery, segregation and other aspects of racism in the St. Louis metro area and Illinois. SIU students and faculty are joined by many others in telling the true stories seldom heard before.

The issue’s name is a reference to the landmark 1857 Dred Scott decision that denied Blacks constitutional rights, including citizenship and freedom. That Supreme Court decision was a focus during the Lincoln-Douglas debates the following year and a prelude to the Civil War.

What many people don’t realize is that significant chapters in the nation’s race story played out in St. Louis and Illinois, according to William Freivogel, SIU journalism professor and Gateway Journalism Review publisher.

For instance, he notes that prior to the Dred Scott lawsuit, although Illinois was considered a “free” state, Lydia Titus, a slave, had to fight in court in the early 1800s for freedom for herself and for her family. St. Louis was the site of some of the nation’s biggest housing discrimination battles, won by Blacks, and was the home of the country’s most expensive court-ordered school desegregation program. Illinois was also an important part of the Underground Railroad.

But there are many very dark spots in the history of racism in the Midwest, including the lynching of about 200 Black people, the murder of 100 during East St. Louis race riots, and more recently, the shooting death of Michael Brown in Ferguson, Missouri, Freivogel said.

Amelia Blakely, who graduated in May with dual bachelor’s degrees in journalism and philosophy, spent many hours “researching the life experiences of enslaved and freed African-Americans up until the end of the Civil War” and learning details of the 200 recorded lynchings that happened between the mid-1800s and 1945, she said.

A native of Anna, Blakely has connections with the surrounding area and an appreciation for the oral traditions of Pulaski and Alexander counties.

“There is a rich, deep history but a lot of it had only been written about a few times,” she said. She suggested that any discussion of race in St. Louis must also incorporate the historically significant connections to Cairo and the Mississippi River. As a journalist, she’s most accustomed to interviewing living people but for this project, she perused historical documents, old newspapers and oral histories.

“A lot of the historical figures we idolize were actually just men of their time, in a messy and dangerous way,” she said. “Reading accounts of white residents parading down streets with a Black human’s head on a pike illuminated the historical cognitive dissonance that many people feel today about racism and American freedoms. Until we, as white Americans, come to terms with what our ancestors consented to, we as a nation will not have true reconciliation and progress when it comes to race. This project pushed that claim deeper into my American consciousness, and I’m deeply grateful for being afforded the opportunity to be a part of it.”

Abbey La Tour, who graduated in 2019 with bachelor’s degrees in journalism and communication design, also believes the magazine is transformative. She handled all of the design duties, including creating the graphics and mapping the site of each lynching in Missouri and Illinois, a sobering experience.

“I think that anyone who can should get their hands on the magazine,” La Tour, a Peoria native now residing in Elizabethtown, Kentucky, said. “Learning more about our local history is really important in order to make sure we can continue to improve as a community moving forward. I think this edition came out at the right time because it is amidst COVID and Black Lives Matter protests and it shows how actions of the past are still affecting people in this moment.”

Among the other highlights of the 1857 issue are:

These and many other stories are told by SIU students and faculty, by civil rights activists from the Midwest, by black journalists, and by students from Kirkwood High School and University City High School in the St. Louis metro area. Freivogel brings to the project some 50 years of experience as a journalist, including 34 years as a reporter for the St. Louis Post-Dispatch. During that time he covered countless stories where race played a role. He said the other writers offer a variety of perspectives in the essays and historical tales they present.

“This issue features some very well-written stories exploring the history of race in this region, a place where very important chapters in the nation’s history occurred,” Freivogel said.

The grant is in conjunction with education outreach for the New York Times 1619 Project, which is an outgrowth of Nikole Hannah-Jones’ 1619 essay in the New York Times Magazine. The 2019 essay, which won a Pulitzer Prize in May, sets forth that race, segregation and racism are central to what America is.

Currently working as a copy editor and paginator for The News-Enterprise, a daily Kentucky newspaper, La Tour found the magazine project gave her the chance to grow professionally, expand her skills and gain new perspectives. She’s learned to be more creative, wrapping type, incorporating photos and quotes within layouts and much more, while also working under a tight deadline. With just a month to finish, she did the bulk of the work in a week and a half while also working full-time.

But, she said because of her appreciation for the editors and writers and how they “inspire me and push me to grow more as a journalist and designer,” she continues to work for the magazine even after graduation. This issue was especially important, she said, because of the partnership with the Pulitzer Center for Crisis Reporting, which means the magazine will reach a wider audience and perhaps even result in some name recognition. But, most important, she said, are the lessons she learned via the stories of race in the Midwest.

Currently living in Nashville, Tennessee, Blakely’s career goals include working in public radio or with non-profit journalism centers to report on underreported/rural areas of America. She began working on another project for the Pulitzer Center for Crisis Reporting shortly after graduation. Originally intended to be an international project in Sweden, the pandemic and travel restrictions resulted in a modification and now, she’s reporting on “acknowledgement and racial inequalities in the cleanup of toxic contamination caused by metal and chemical refining industries.” She’s focusing on a former lead smelter in Herculaneum, Missouri, and the site of a former railroad tie plant in Carbondale.

“Both sites are remediated by the EPA but their conditions are in stark contrast to each other,” she said.

She said the 1857 project has had a major impact on her in many ways.

“I was so impassioned about this project because growing up in Southern Illinois, none of the history in this edition of GJR was ever told to us in schools or in the community,” she said. “Frankly, I think it’s a disservice to hide and cover up history that is unfavorable or horrible because it inhibits future generations from having a more complete understanding of where they originate. With the historical understanding of racism that I’ve gained, and continue to seek, I intend to continue writing honestly about race in America.”