Stokes, who died in December 2012, was a civil rights activist, librarian and television producer who recorded thousands of hours of television news footage beginning in 1979 with the start of the Iranian hostage crisis until her death. The collection includes 24/7 coverage of Fox, MSNBC, CNN C-SPAN, CNBC and other networks.

The film is now streaming with the free PBS video app that participants can use to watch the film before the discussion.

Registration for the free ZOOM meeting is available in advance. After completing registration, participants will receive an email confirmation with information about joining the meeting, along with the meeting ID and a password. Participants will also receive a reminder prior to the event.

For information is available by contacting outreach@wsiu.org or cplib@carbondale.lib.il.us . WSIU Public Broadcasting, the SIU School of Journalism and Carbondale Public Library are program sponsors.

The panelist discussion after the film will feature two SIU journalism alumni and William Freivogel, a professor in the School of Journalism and publisher of the Gateway Journalism Review.

In addition to Freivogel, the other panelists are:

The 2019 film is the culmination of 70,000 VHS tapes that Stokes recorded through the years capturing everything from revolutions, wars, catastrophes, talk shows and commercials. The film premiered at the 2019 Tribeca Film Festival and played at several other film festivals throughout the world.

“Marion Stokes' preservation of decades of TV news reminds us of how much the 24-hour news cycle changed the country and politics,” Freivogel said. “It also reminds us how powerful a few seconds of TV can be, whether it is the tape of the hostages in Iran or the explosion of the Challenger or the powerful witness a camera can be to the kind of police brutality inflicted on Rodney King. That lesson reverberates today with the uprisings in response to video of the alleged murder of George Floyd.” 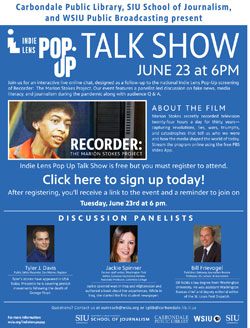