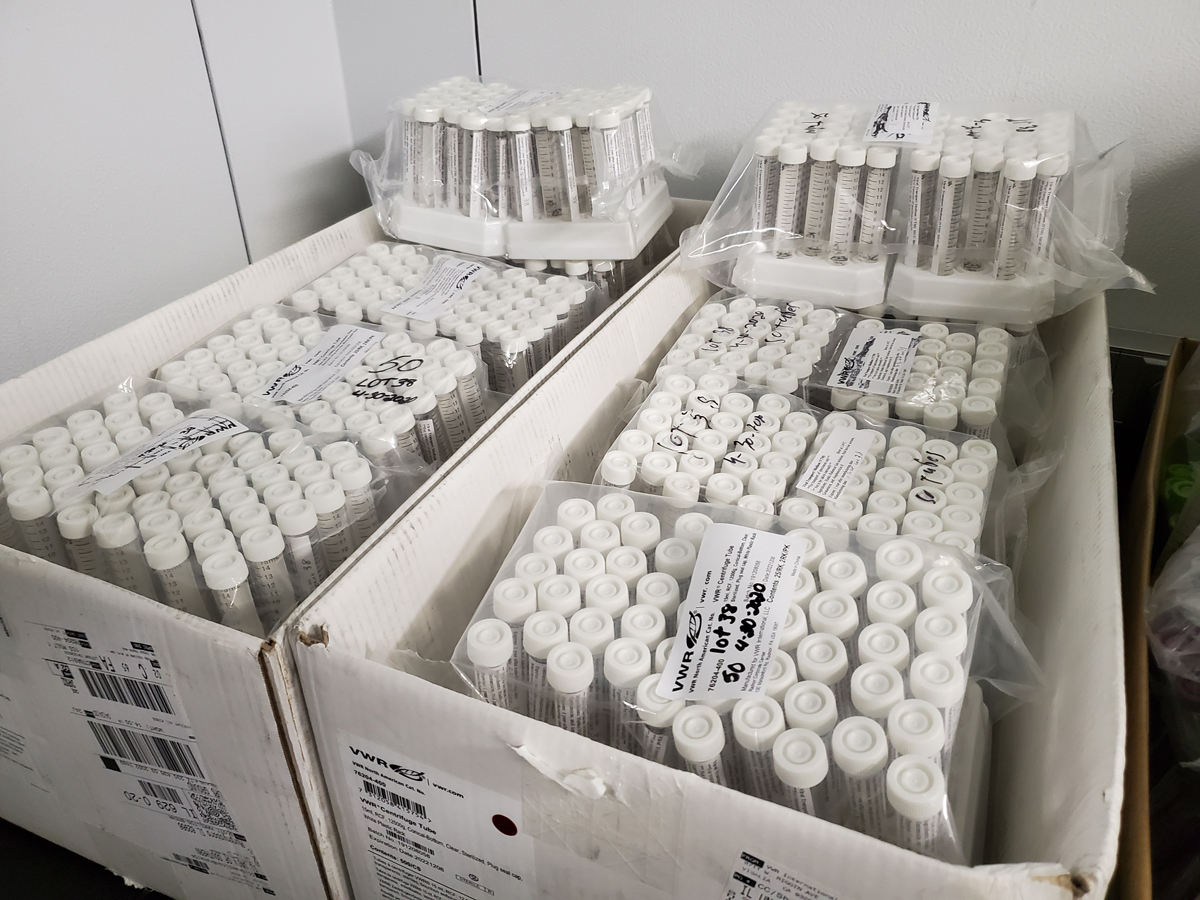 A shipment of 10,000 vials filled with Viral Transport Medium made at Southern Illinois University Carbondale awaits shipment to Illinois Department of Public Health officials. Having fulfilled its initial contract of 40,000 vials with the state, SIU has signed on to provide at least another 40,000 vials over the coming weeks. (Photo provided)

CARBONDALE, Ill. — Having fulfilled its initial contract with the state, Southern Illinois University Carbondale has signed on to provide another large batch of a key ingredient for COVID-19 test kits.

A team of SIU faculty, staff and students last week delivered the final shipment of Viral Transport Medium (VTM) committed through its initial contract to state health officials. The delivery brought the total number of vials delivered by SIU to 40,000.

With the health emergency continuing, the state has asked SIU to provide at least another 40,000 vials of the ingredient, which preserves the virus’ DNA long enough to be tested. Gary Kinsel, vice chancellor for research at SIU, said he is proud of the team’s invaluable work for the state.

In early April, as the magnitude of the virus became apparent, state leaders asked universities to investigate making VTM, which was in short supply due to sudden large-scale need. The substance plays a critical role in testing individuals for COVID-19, as medical personnel place swabs from suspected cases in vials containing the solution before capping, sealing and sending them to testing facilities.

SIU researchers, along with several other state universities, stepped forward, with SIU providing the first batch of 10,000 VTM vials to state health officials on April 14.

Since then, the need for COVID-19 testing has remained high.

“You can see it in the news: More drive-up swab testing, no need for doctors’ approvals, the governor has outlined a plan to bring Illinois back online,” said Scott Hamilton, assistant professor of microbiology and one of the leaders of the effort.

Some of his former students who now work for Illinois Department of Public Health testing facilities have seen SIU VTM tubes pass through their hands, while some vials have traveled the length of Illinois twice as they are used. The importance of the mission is stressed in the lab every day, he said.

“As I am training new people to help in the lab, I will hold up one vial and say ‘this is a person’s future, knowing how they should proceed with or without the virus,’” Hamilton-Brehm said. “We are building the future of re-opening Illinois, person by person. It fortifies us. It is good to know that a small group such as us at SIU can meet the challenge and be successful.”

As scientists will, Hamilton-Brehm said the team has learned from each phase and batch they have created and are hoping to improve and streamline the effort going forward.

“We have the right tools now, through support of the state, and we have purchased a surplus of materials to last us through a whole month, and we have the right people, all Southern Illinoisans and SIU people,” he said. “The college spring semester is complete, so we are now unleashed. The only limits are our carrying capacity to ship vials to Springfield, and the commitment to complete the job.”

Hamilton-Brehm said the university is under contract to manufacture a minimum of 40,000 additional vials and have been given permission to make more. But SIU’s footprint in the battle reaches far beyond the campus effort.

“We have a lot of amazing students and members of our community volunteering their time,” he said. ”Many of the students are people I have trained personally before the pandemic. They are working with us or are out there at the IDPH facilities or at the local hospitals, and they deserve a mountain of praise. They are finding their strength, rising to become leaders. They go where the timid do not tread. I hope no one forgets what they have done in this crisis.”