Former Microsoft leadership coach to give insights on career building

CARBONDALE, Ill. — As insiders go, Kevin Purcell was among the most elite.

As senior director of organization development for Microsoft from 1993 to 2004, Purcell led the design and development of executive and management development courses and strategic planning services for founder Bill Gates and former CEO Steve Ballmer.

Free event, open to the public

The two sessions, titled “Inside Bill’s Brain from an Insider’s View,” are set for 5:30-8:30 p.m., Feb. 17 and 24, at the Student Center Auditorium. The sessions are independent of one another. They are free and open to the public.

Each session will include a viewing of the documentary “Inside Bill’s Brain: Decoding Bill Gates,” along with a Q&A session with Purcell, who has run his own global consulting business since 2004. The business, focused on leadership and organization development, lists giants such as Oracle, Intel, and the Gates Foundation among its clients.

While not a top executive at Microsoft, held a unique position that enabled him to influence leadership and strategy development at the company for many years. He also worked closely with Gates and all the top executives in this regard.

Purcell’s events are sponsored by the Leadership Development Program, which prepares engineering students for the challenge of future industrial leadership. Bruce DeRuntz, professor and director of the program, said the documentary that will be shown as part of the sessions shows how one of the world's richest men uses his wealth and intellect to solve the world's most complex environmental problems. But Purcell adds greatly to that picture, he said.

“Bill Gates’ altruistic leadership is inspiring to all of us, but I get the sense that his leadership skills were developed with the help of people like Kevin,” DeRuntz said. “We wanted to bring in Kevin because of his high profile, high-impact leadership coaching and how it is helping to make the world better. Leadership training has the potential for all of us to do this.”

DeRuntz said the sessions will help anyone who aspires to lead and have an impact on others.

“They will discover how their early formative years, like Bill's, are the starting point for their leadership journey, and that anyone can learn to lead through education, practice and coaching,” DeRuntz said.

Those attending also will have the opportunity to win a lunch with Purcell, where they will learn further lessons about accelerating their careers.

Free event, open to the public 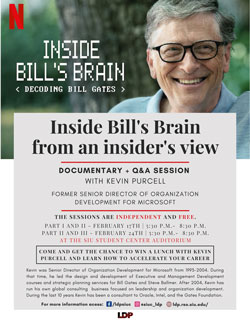