‘Film Fridays’ to feature a variety of international films

CARBONDALE, Ill. — Seven students in the College of Mass Communication and Media Arts’ graduate program will give their perspectives to a variety of international films this semester.

“Film Fridays,” presented by the Department of Cinema and Photography, will feature eight free films beginning Feb. 7. The film screenings all start at 4 p.m. and will be shown in Lawson Hall, Room 131.

All screenings are free and open to the public.

Students select the films to present and discuss

Graduate students are serving as film curators, selecting the film, discussing it with the audience and then leading a Q&A after the film, H.D. Motyl, department chair, said.

“These are films that have a personal resonance for the grad students, so the post-screening discussions should be very insightful and lively,” he said.

Schedule includes a variety of films

The schedule, with film, country of origin, year, director and curator, is: 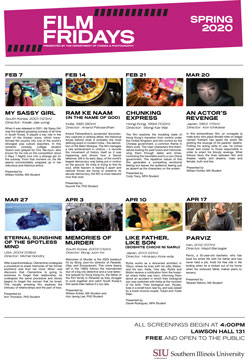 Films presented by College of Mass Communication and Media Arts graduate students during the spring 2020 semester.

Open to the public, no admission.