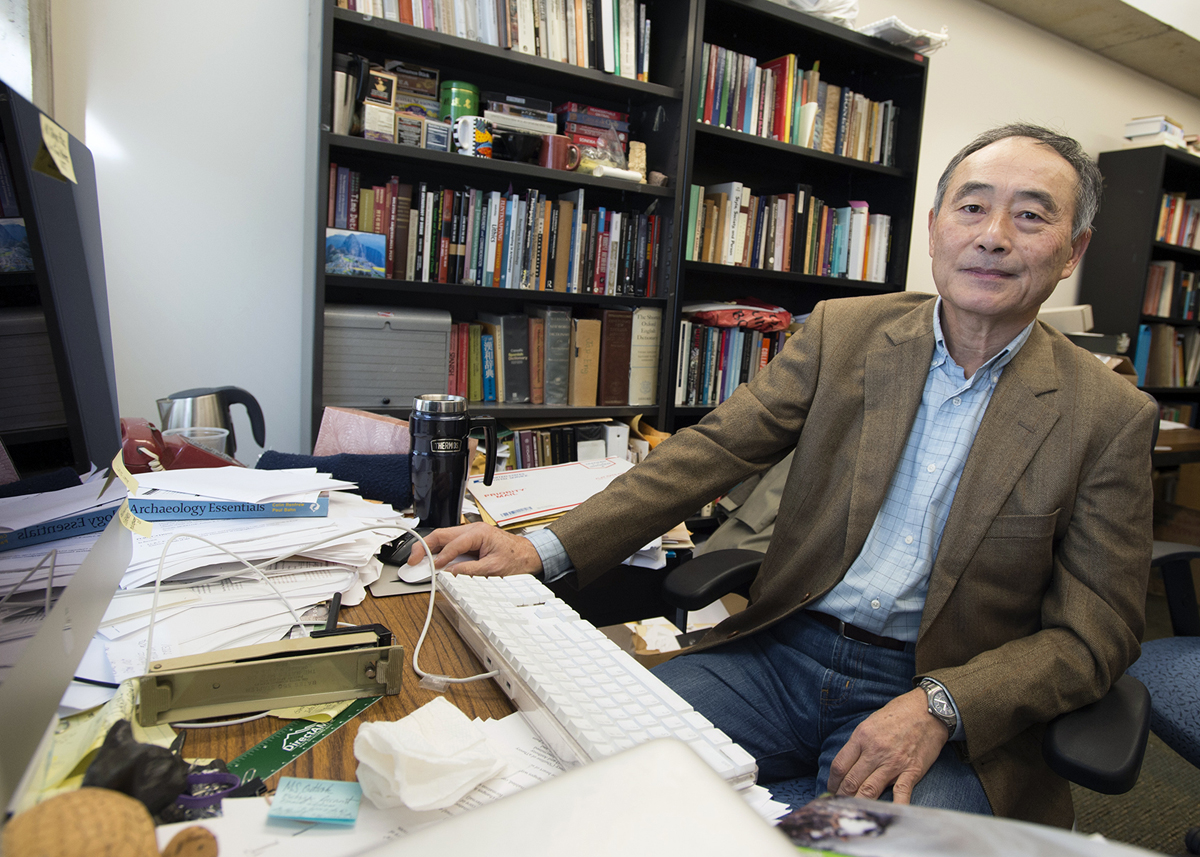 To receive high honor – Izumi Shimada, a distinguished professor in SIU Carbondale’s anthropology department, next week will receive the Order of the Sacred Treasure, conferred by the Emperor of Japan. The honor is presented to those who have made distinguished achievements in research fields, business industries and other creations that have advanced societies. (Photo by Russell Bailey)

CARBONDALE, Ill. — Izumi Shimada, a distinguished professor in Southern Illinois University Carbondale’s anthropology department, received a discreet, subject-less email at the start of the school year and immediately thought something was wrong with his future research plans.

The longtime anthropology innovator did a little more digging, however, and learned that the “urgent” notice actually meant he was in line to receive a spectacular honor -- the Order of the Sacred Treasure, conferred by the Emperor of Japan.

Shimada, who was born in Japan and has been a professor at SIU for 26 years, will soon leave for Tokyo for a two-part celebration that begins on Tuesday. He will pay a visit to Japan’s Ministry of State and then the Imperial Palace to be introduced to Japan Emperor Naruhito.

“The email was totally out of the blue,” said Shimada, whose research has focused on complex pre-Hispanic cultures of the Andes Mountains countries. “It came from the Japanese Embassy in Peru. I was told it had to be kept secret for a while. Really, at first I feared something bad had happened (in regards to research opportunities). Everything was very formal.”

Honor of a career

Shimada said he had heard of this honor, but “it’s not something an ordinary academic would think of.”

Shimada has spent the last 43 years of his career going to Peru to study its civilization. He first came to America as a youth, when his father was invited to become a professor at Princeton University. Shimada never went to Peru until graduate school, though he was familiar with a strong immigration link between Japan and Peru, which dates to the late 1800s. Today, there are about 160,000 people of Japanese descent living in Peru, The majority are descendants of pre-war immigrants.

Shimada is finishing up a semester-long sabbatical at SIU, and he spent the last five months in Peru. His next visit, early next year, is part of a 3-year National Science Foundation grant. He was named the university’s Outstanding Scholar in 2007.

The Order of the Sacred Treasure award dates to 1888. It primarily is presented to individuals  who have made distinguished achievements in research fields, business industries and other creations that have advanced societies.

Shimada says he’s taken special care in recognizing his privilege in understanding a variety of cultures.

“I don’t just study the ancient part (in Peru),” he said. “I try to learn about the modern-day people and the traditions that link the past and the present. I consistently have tried to serve as a link between the cultures by designing and supervising exhibits on the Andean civilization in Japan and other countries”

He will be back to teaching two courses at SIU next semester: an introductory-level course plus a graduate seminar on the fundamentals of archaeology.