‘Twisted,’ a parody of Disney films geared toward adults hits SIU this week

CARBONDALE, Ill. — A collection of Southern Illinois University Carbondale students and young professionals from the area started rehearsing for a production of “Twisted” right before Halloween, and they’re ready to show off a parody of Disney geared toward adults this week.

“This show is unlike any that exists, and yet, it is still familiar,” director Jake Ellsworth, a senior double major in musical theater and public relations, said. “‘Twisted’ is a direct parody of the entirety of the Disney animated Magic Kingdom universe — with a special focus on the world of ‘Aladdin’ — as well as the famous musical, ‘Wicked.’ You'll see all your characters from your childhood, but make no mistake, this isn't a show for kids. It's both nostalgic and explicit.”

Ellsworth said the cast has spent nearly every evening since Oct. 28 preparing for this show.

“The students’ participation in this show is not done out of any educational requirement, but simply because they love the art of musical theater and want to continue to showcase their talents regardless of the career path they have chosen,” Ellsworth said.

“We have a cast with a diverse set of majors such as zoology, musical theater, neuroscience and more. We are also the regional premiere of this musical, so it's likely the first time anyone from the area will see this show.” 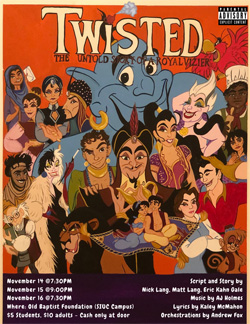