CARBONDALE, Ill. — November is Native American Heritage Month and Southern Illinois University Carbondale is paying homage to the occasion with a number of special events.

The official Kickoff is set for 5 p.m. on Monday, Nov. 4, in Morris Library’s John C. Guyon Auditorium and Rotunda. Joshua Reid, director of the Center for the Study of the Pacific Northwest and the John Calhoun Smith Memorial Endowed Professor of History at the University of Washington, will be the special guest speaker.

He will present “Makah Voices and the Sea,” based on his book, “The Sea Is My Country: the Maritime World of the Makahs,” published by the Yale University Press as part of the Henry Roe Cloud Series on American Indians and Modernity. The Makahs were a tribal nation residing at the most northwestern point of the contiguous United States and their culture and identity was tied strongly to the sea. Reid’s book is the first in-depth examination of the Makah, their history, their role in shaping the maritime economy of the Pacific Northwest and much more.

Reid is a registered member of the Snohomish Indian Nation and holds degrees from Yale University and the University of California – Davis. He is a three-time Ford Foundation Fellow.

His current research focuses on indigenous explorers in the Pacific from the late 1700s to the end of the 19th century and his research interests also include American Indians, identity formation, the cultural meanings of space and place, the American and Canadian wests, the environment and the indigenous Pacific.

He teaches courses on American Indian history, the American West, U.S. history and environmental history. He has also served in other editorial, committee and guest speaker roles and earned variety of awards and recognition for his work.

After Reid’s presentation, there will be a special “Music of Native America” performance in the Rotunda, featuring Marsha Forrest and Mark Denzer. Both are of Woodland Native lineages. . Their performances of various native songs will also include information about the cultural significance and history of the music.

Forrest is a longtime registered nurse and health and wellness consultant of Mohawk ancestry. She grew up on the Six Nations Reservation in Ontario, Canada. Denzer is an Oklahoma Choctaw, a Vinyard Indian and executive director of the Vinyard Indian Settlement. He operates Cache Bayou Outfitters.

Barney Bush will lead a poetry reading at 6 p.m. on Nov. 14 in the Student Services Building, Room 150/160. Bush writes original poetry and is chairman of the board of directors for the Vinyard Indian Settlement. He writes about his homeland and the various aspects of nature. He is the first indigenous poet admitted to the Society of Artists, Composers and Editors of Music in Paris, France and has organized several schools in Native American regions and helped create Native American studies programs for educational institutions serving all ages.

The other major event is “Perspectives on Native American Identity,” a panel discussion. The event is set for 6 p.m. on Nov. 18 in Student Services Building, Room 150/160.

All events are free and open to the public. No pre-registration is needed.

In addition, SIU’s Student Multicultural Resource Center will be posting Native American History facts on their website. Visit smrc.siu.edu and check out the “Did You Know” section. New historical information will be added each Monday throughout the month. 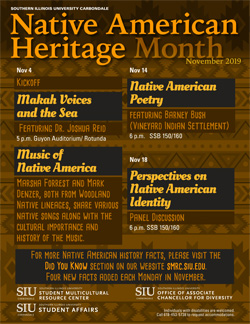