LaHood, a respected leader in Illinois and national politics for more than four decades, will offer his perspective at 5 p.m. in the Student Center Ballroom B. Hosted by the Paul Simon Public Policy Institute, the lecture is free and open to the public.

Reporters, photographers and news crews are welcome to cover the lecture by Ray LaHood at 5 p.m. on Oct. 21, in Student Center Ballroom B. There will be a media availability before LaHood’s lecture. To arrange for interviews or for more information about the event, contact Cary Day, marketing and communications coordinator, Paul Simon Public Policy Institute, at 618/453-4008.

‘Respected and admired’ by both parties

LaHood, a Republican, served as President Barack Obama’s Secretary of Transportation from 2009 to 2013.  He worked on a variety of infrastructure projects and transportation safety issues, ranging from aviation and automobiles to pipelines and railroads.

John T. Shaw, Institute director, said LaHood is “respected and admired by both Democrats and Republicans.”

“Ray LaHood is a highly respected leader in Illinois and across the United States,” Shaw said. “He is known as a fair-minded problem solver who is able to work with members of both parties to tackle hard problems. Few people have as nuanced an understanding of the politics and policy challenges facing the Prairie State and the United States as Ray LaHood.”

Served in Congress for 14 years

A native of Peoria, LaHood represented Illinois’s 18th congressional district from 1995 to 2009, serving on both the House Appropriations and House Intelligence committees. Before he was elected to the House, LaHood was the chief of staff to long-time U.S. House Minority Leader Robert Michel.

LaHood was recently named by Gov. J.B. Pritzker as the new chair of the Board of Directors of the Abraham Lincoln Presidential Library and Museum. LaHood is also the author of “Seeking Bipartisanship: My Life in Politics,” which was published by Cambria Press in 2015.

The lecture is in keeping with the Institute’s fall 2019 theme, “Better Politics, Smarter Government.” The three programs within that theme are:

Each of the programs raise the Institute’s profile while underscoring the commitment to elevated politics and effective government championed by its founder, former U.S. Sen. Paul Simon, D-Illinois, according to Shaw.

Visit paulsimoninstitute.siu.edu for more information about the Institute and upcoming events. 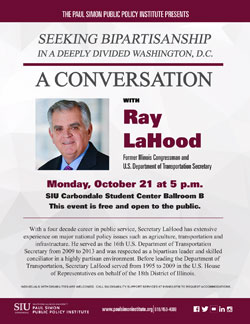