Professor Kennedy will present “A Tale of Three Cities: How the United States Won World War II” at 6 p.m. in the Student Center Auditorium. The lecture is free and open to the public.

The Morton-Kenney Public Affairs Lecture Series is presented by the Paul Simon Public Policy Institute and the Department of Political Science.

Kennedy is a professor emeritus of history at Stanford University. He won the Pulitzer Prize in history in 1999 for “Freedom from Fear: The American People in Depression and War,” a critically acclaimed account of the presidency of Franklin D. Roosevelt and his times.

He is the author of other highly regarded books including “Over Here: The First World War and American Society,” which was a Pulitzer Prize finalist, and “Birth Control in America: The Career of Margaret Sanger,” which won a Bancroft Prize. He collaborated with former Secretary of State Condoleezza Rice on a popular PBS documentary, “American Creed,” that has inspired a spirited conversation about American ideals and identity.

“Professor Kennedy is one of the popular and respected historians in the United States,” said John T. Shaw, the director of the Paul Simon Public Policy Institute. “He is a careful and rigorous scholar and a compelling and gifted writer. His books are deeply informative and remarkably interesting.  He bridges the worlds of academic and popular history better than any other historian today. His books inform and entertain.”

Kennedy is the 46th lecturer in the series, which occurs in the spring and fall of each year.

The late Jerome Mileur established the series in 1995 in honor of two of his political science professors — Ward Morton and David Kenney — who inspired him as a student.

Mileur, who died in September 2017, earned his bachelor’s degree in speech communication in 1955, and a doctorate in government in 1971, both from SIU Carbondale. Originally from Murphysboro, he was a professor emeritus in political science at the University of Massachusetts-Amherst and retired in 2004 after a 37-year teaching career there. 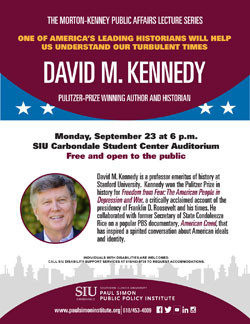