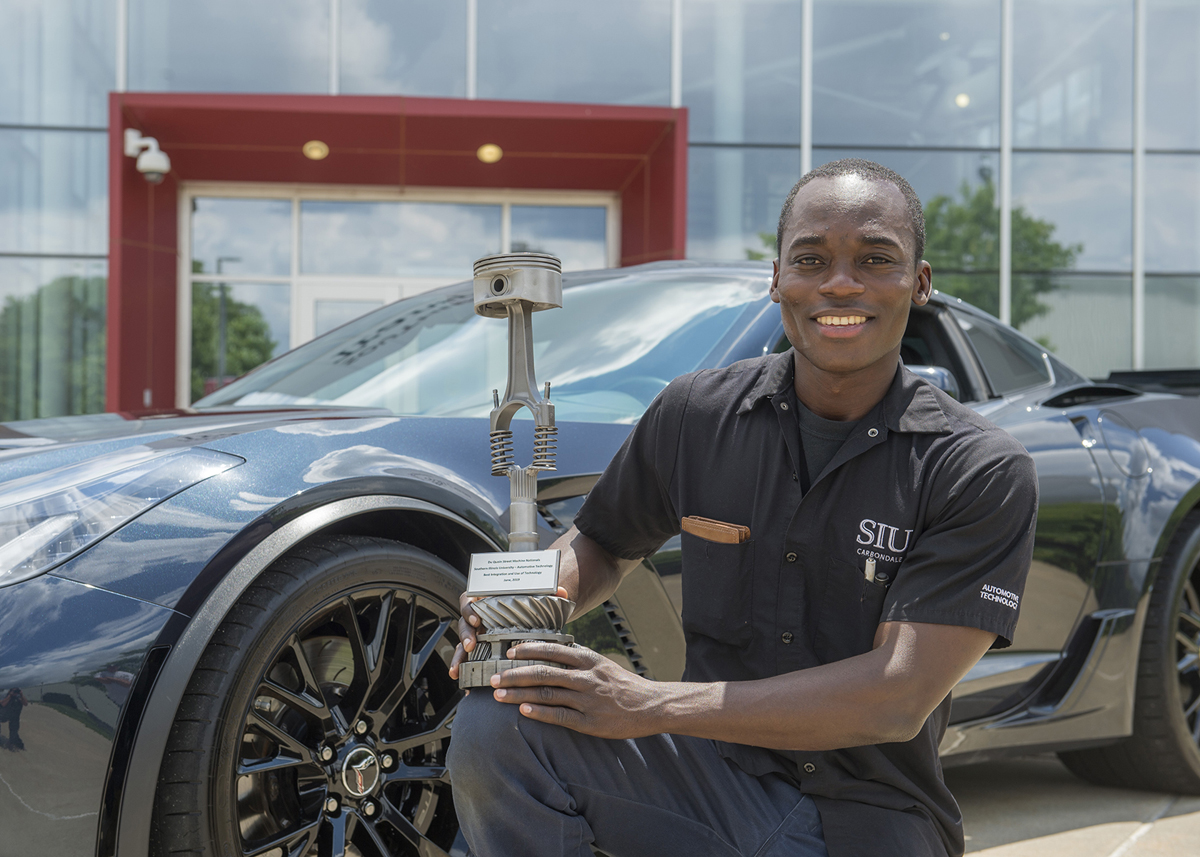 Making a return to Du Quoin -- Holly Pierre, a senior in SIU Carbondale’s nationally recognized automotive technology program, holds the student-designed 2019 “Best Integration and Use of Technology Award” trophy. The trophy will be presented Sunday at the General Tire Street Machine Nationals. This is the seventh year that the program has participated in the event. Pierre, who helped judge last year’s competition, is from Port Au Prince, Haiti. (Photo by Russell Bailey)

CARBONDALE, Ill. – Students in Southern Illinois University Carbondale’s nationally recognized automotive technology program will be on hand this weekend when the thunder of high performance street machines, hot rods and trucks rumble through the region at the General Tire Street Machine Nationals.

Along with a love of automobiles and technology, the students will share their experience and knowledge for what organizers will anticipate will bring more than 2,800 vehicles and more than 25,000 people to the Du Quoin State Fairgrounds for the 36th annual show, which runs Friday through Sunday.

“You will see at Street Machine Nationals and at other car shows and various automotive-related events around the nation that it’s really a family atmosphere and that we help each other out and take care of each other,” Michael Behrmann, Department of Automotive Technology chair, said. “That’s part of the car culture; being a part of that family and our students are part of that family.”

Automotive technology faculty, staff and students will be available throughout the event for interviews. The SIU trailer will be located west of the main stage area on the fairgrounds.

For a fourth year, SIU students will host a “Hot Rod Hospital,” where they lend a hand in making repairs or loan tools and equipment to event participants who need to make quick adjustments to their vehicles. In the case of a parts breakdown, participants can go to a local auto parts store and get repair help from students.

In addition to providing a few nuts, bolts and wires where needed, students have worked on cars with broken steering linkages and brake issues the last few years, Behrmann said.

“Each year there is somebody who needs assistance and we are able to help,” he said.

Students also judge entries with a focus on technology

For the seventh year, since the three-day show returned to Du Quoin and the region in 2013, students will judge and present the “Best Integration and Use of Technology Award.” Developed by the students, the award goes to the participant who judges believe best integrates technology when building and fabricating different components on the vehicle.

After meeting with the head judge Saturday morning for a discussion on how to gauge differences in exhibitors’ vehicles and what to look for, students will break into groups and begin their work. Students will make several treks through the fairgrounds during the day in the attempt to judge each of the vehicles, since some exhibitors might leave to go cruising or change locations, Behrmann said.

“Hopefully by Sunday morning they will have it down to their final pick,” he said.

The trophy students built this year is comprised of a transmission planetary gear set, a rear axle pinion, valves, springs, a rod and piston.

Event offers students a perspective and ‘sense of community’

Anthony Heathcoat, an assistant instructor in the department, graduated from the program in 2016 and remembers the Street Machine Nationals while he was growing up in Benton.

“This shows the students a lot of the car community that we have in Southern Illinois and the area,” said Heathcoat. “There are so many beautiful roads around here that they may not see.”

Once the decision to return the event to the region was reached, Behrmann contacted organizers offering the program’s assistance.

“Street Machine Nationals and our participation in it is a way for us to welcome thousands of car and truck enthusiasts into our Southern Illinois community,” he said. “We want to help ensure that their time with us is enjoyable and that they learn, see and experience a lot and will be wanting to come back in the future.”

“I didn’t expect that variety of vehicles and the technology that they put into them,” he said. “I was blown away from the upgrades. When you go from cars from the 1920s to 1970s and see the way they incorporated new technology that is pretty awesome.”

Pierre will graduate in August and work with Garia Inc., a Scandinavian low speed vehicle and golf car manufacturer. Garia, which has a North American location in Houston, Texas, is working with the program in the research and development of improved lithium batteries.

Kyle Smith, a senior from Monticello, will be attending his first Street Machines and will be involved in judging. He is looking forward to talking with exhibitors and gaining more knowledge on their passion. He transferred from Parkland College in Champaign and will graduate in May. Smith said he opted for SIU due to the “great reputation of the program.”

As a part of the weekend, the program will take a 2015 Z06 Chevrolet Corvette along with vehicle system simulators to Du Quoin. Behrmann notes that many modern street machines incorporate newer technology to provide more than just great performance.

Students will be demonstrating some of the newer technology features found on today’s vehicles, Behrmann said. This will help inform and educate those attending the show on some of these systems, as well as provide an awareness of the technology and sophistication found throughout a vehicle.

“Today’s modern vehicle is a rolling laboratory with hundreds of micro controllers, several computer networks, and well over 100 million lines of computer code,” he said. “They all work in unison to improve safety, fuel economy, emission reduction, customer convenience and performance.”

Automotive Technology students will develop, judge and present the “Best Integration and Use of Technology Award” at the 36th annual General Tire Street Machine Nationals, this Friday through Sunday, at the Du Quoin State Fairgrounds.

The program will also have a “Hot Rod Hospital” available for participants who need to make repairs or borrow tools and equipment for quick adjustments to their vehicles.

Holiday Walk-in Activity-Paint and Plate for your Valentine

Holiday Walk-in Activity-Paint and Plate for your Valentine