CARBONDALE, Ill. – A look at the history and development of the SIU School of Law is set for Tuesday at Southern Illinois University Carbondale.

Thomas C. Britton will present a retrospective on the law school based on his chapter in the recently released “Southern Illinois University at 150: Growth, Accomplishments, and Challenges.”  The presentation is at noon, May 21, in the Hiram H. Lesar Law Building Courtroom.

Admission is free and the event is open to the public. The presentation is expected to last 30-45 minutes followed by Q&A. Copies of the book will also be available for sale.

History of the law school detailed

Britton, a member of the law school’s first graduating class in 1976, will discuss the law school’s early development, its’ accomplishments during the past 40-plus years and the evolution of its teaching, research and service missions. The law school opened in 1973.

Established initially in the public interest to educate attorneys and leaders for service in Southern Illinois, the school has nearly 4,600 graduates, many of whom work in the region. The school’s research and service missions have contributed greatly to the region and state

Britton said an early proposal for a law school in Southern Illinois came early under the umbrella of Southern Illinois Normal University. The school failed to launch in the early 1870s because of low enrollment. Through the next century, the need for a law school south of Champaign-Urbana became more evident based on a shortage of attorneys in the region, Britton said.

While there were a number of different proposals on how the curriculum should be structured, founding Dean Hiram H. Lesar was “really the architect of the law school.  He took a traditional approach, but once the school was established he encouraged innovation and service,” Britton said.

Lesar, a native of Thebes, Illinois, was hired from the Washington University School of Law in St. Louis, where he had served as dean for many years.

Britton retired as an emeritus professor at the law school. He earned his bachelor’s and master’s degrees from SIU Carbondale in what has been a five-decade relationship with the university, including, most recently service on the SIU Board of Trustees.

After graduating from law school, Britton would begin his service in a number of administrative roles for the SIU System and SIU Carbondale. He started his career with the university system as administrative counsel to the Board of Trustees.

Britton spent 17 years in SIU’s Central Administration, where he served in various capacities, including executive assistant to the president, system vice chancellor/president for administration and SIU Carbondale vice chancellor for institutional advancement.

In 1992, Britton joined the law school full-time and became the first SIU School of Law graduate named associate dean. He was acting dean in 1995-96 and was an associate professor and director of the law school’s graduate legal studies program and director of development. He retired in 2016, upon being named outstanding faculty member by the class of 2016.

He taught courses in the area of public law, including administrative law, legislative and administrative process, state and local government law and education law. As director of the Graduate Legal Studies, Britton oversaw development and inclusion of the law school’s first non-JD graduate programs: the Master of Legal Studies (MLS) and Master of Law (LLM) program. 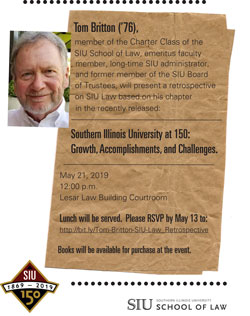