Chancellor John M. Dunn will host a recognition ceremony honoring the recipients of the Faculty and Staff Excellence Awards at 3 p.m. on May 1 in the John C. Guyon Auditorium at Morris Library. Refreshments will be available after the program.

“I like to say that at SIU, it’s personal,” said Chancellor John M. Dunn. “And the winners of these awards exemplify the qualities that make that true. Their dedication to outstanding teaching, research and service ensures our students receive individual attention and a superior education. I appreciate their hard work and am happy to have them as part of the Saluki family.”

The Scholar Excellence Award “recognizes and promotes outstanding research and creative endeavors,” and is given only to those “who have made outstanding contributions to their discipline” and who are “widely recognized for their achievements by other scholars in the field.”

His research has advanced the field of genetics in relation to human diseases. He has published more than 70 peer-reviewed articles in respected journals such as Molecular and Cellular Biology, the Journal of Molecular Biology, and the Journal of Biological Chemistry. His work has also garnered “spotlight” positions and was used as the cover image for these prestigious journals. He also serves as an editor or on the editorial boards of several journals, including GENE and PLOS ONE.

He has presented at 28 prestigious national and international conferences, and he has earned grants from the U.S. National Institutes of Health, the American Heart Association, the American Cancer Society and the Edward Mallinckrodt Foundation.

Anderson received his bachelor’s degree and Ph.D. in organic chemistry from the University of Melbourne, specializing his graduate research on the organic chemistry of coal. He completed his postdoctoral studies at Argonne National Laboratory before taking work in the private sector. He joined SIU’s faculty in 2003.

He has also served in various roles with the American Chemical Society, and helped to establish the Division of Geochemistry’s open access journal “Geochemical Transactions.”

Anderson’s research into environmentally friendly ways to use coal led to multiple patents for a new process to utilize coal. The process drastically reduces the amount of pollution, including greenhouse gases like carbon dioxide, when compared to burning coal for energy.

He started a company, Thermaquatica Inc., to find commercial uses for this new process, resulting in multiple awards, including SIU Innovator of the Year, SIU Startup of the Year and the State of Illinois SBDC Shining Star Award.

“Dr. Ken Anderson has offered outstanding service to his department, university, and to his discipline and he has an international reputation for his research in organic geochemistry,” said Steven Esling in his nomination letter. “He is an outstanding teacher who has changed the lives of students.”

Anderson has a focus on students. When he realized that many students would have multiple final exams in one day, he recruited his colleagues to help him create a new algorithm for the university’s final exam schedule. The result, which seeks to minimize conflicts is currently used by the registrar’s office to create the final exam schedule.

The Early Career Faculty Award recognizes faculty within their first five years at SIU Carbondale for “significant contributions throughout the year” to their discipline or the university community. The award recognizes excellence in scholarship, teaching and other professional activities.

He joined SIU in 2015, and has taught a variety of courses, including Cellular and Molecular Biomechanics, a course he developed himself. He earned the department’s Outstanding Teacher Award in both 2016 and 2017.

Farhan is also a prolific researcher. He has authored 27 peer-reviewed articles and has been sited more than 2,100 times, according to Google Scholar. His research was featured in multiple news outlets, including in The Scientist, a prominent Science news journal.

His work has also earned multiple grants, including funding from prestigious institutions like the Elsa Pardee Foundation and the National Science Foundation.

“Farhan represents a new generation of young engineers and scientists who perform interdisciplinary research in science, engineering and biology,” said Dr. Rosit Koc in a nomination letter. “His excellence in teaching, grantsmanship and student supervision make him a promising and rising junior faculty in the university.”

The Women of Distinction Award is given to a faculty, administrative/professional or civil service staff member, and recognizes employees for a “sustained commitment to women and/or issues of diversity through demonstrated leadership, vision, or actions” in their profession, expertise or service to the university community.

Bardhan has taught at SIU since 1998, and has previously served as assistant chair and acting chair for the Department of Communication Studies. She earned her bachelor’s degree in English and philosophy at Lady Shriram College for Women, Delhi University, and her master’s and doctorate degrees from E.W. Scripps School of Journalism at Ohio University.

Sandy Pensoneau-Conway said she nominated Bardham for the award because of her “unwavering support, her commitment to her students and her overall demonstration of excellence.”

Bardhan also serves on the advisory board for the Plank Center for Leadership in Public Relations and co-chairs that organization’s Diversity and Inclusion subcommittee. She volunteers with For Kids’ Sake, a local nonprofit, the United Nations Association, the Peace Coalition and more.

“She is known internationally for her work in critical/cultural studies that sheds light on diversity issues in public relations, often in a global context,” wrote T. Kenn Gaither in a nomination letter. “In her area of specialization, she has few peers and has carved out a place as a preeminent scholar in global public relations practice.”

The Staff Excellence Award recognizes an administrative/professional or civil service staff member for “significant contributions” to further the university’s mission. That includes demonstrating excellence in overall work performance, helping to improve students’ experiences, and serving as a positive role model for faculty, staff and students.

McGoy is an actor, creator and motivational speaker, who earned both his bachelor’s and master’s degrees from SIU. Since 2013, he has served as the assistant dean of students, where he oversees several important programs, including First Scholars and TRIO Student Support Services, among others. Before that, he worked as an admissions coordinator and the coordinator of new student programs from 2006-2010.

“Jeff is the epitome of a student affairs professional,” said Randolph Burnside in a nomination letter. “His hard work on behalf of and dedication to SIUC and our students is known not just on the campus, but throughout the Southern Illinois community.”

In addition to his duties as assistant dean of students, he is the Undergraduate Student Ombudsman and a care manager for Saluki Cares, and also serves on the board of directors for McLeod Summer Playhouse. He has given his time to numerous organizations through the years, including the Boys and Girls Club of Carbondale, 13Pro and LifeSavers.

He has worked as a motivational speaker and performing artist throughout the Southern Illinois region for almost a decade, lending his talents to theater performances, school and community events, and more.

He has earned recognition from varied organizations, including earning the Zeta Phi Beta Sorority, Inc. Mu Delta Chapter Man of the Year and the Boys and Girls Club of Carbondale Community Leader and Mentor Award.

Attig had an 11-year career as a toolmaker and metrology department supervisor before joining the College of Engineering as a tool and instrument mechanic in 2005. Since then, he has worked his way up to research laboratory shop supervisor. He earned both his bachelor’s degree and master’s degree from SIU.

As the  adviser for SIU’s Baja racing team and Moonbuggy team, Attig has a direct impact on students. He helps the teams design their cars, troubleshoot issues and travels with the teams to competition. He also trains students on how to use the machine shop tools, and personally plans and seeks funding to expand and improve the shop.

“You can’t ask for a better role model for the students than Tim,” said Tsuchin Philip Chu in a nomination letter.

In 2017, he earned the College of Engineering Dean Thomas B. Jefferson Outstanding Staff Award.

He is sometimes called “The Wizard” by his colleagues “because some things he accomplished could have only been done through magic,” said Liz Popolizio in a nomination letter. “His knowledge, experience, respect, and authority all attribute to not only a great instructor, but a true and genuine leader.” 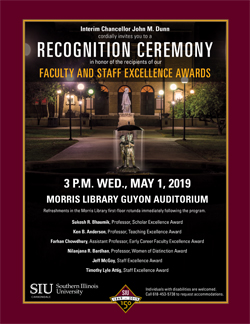