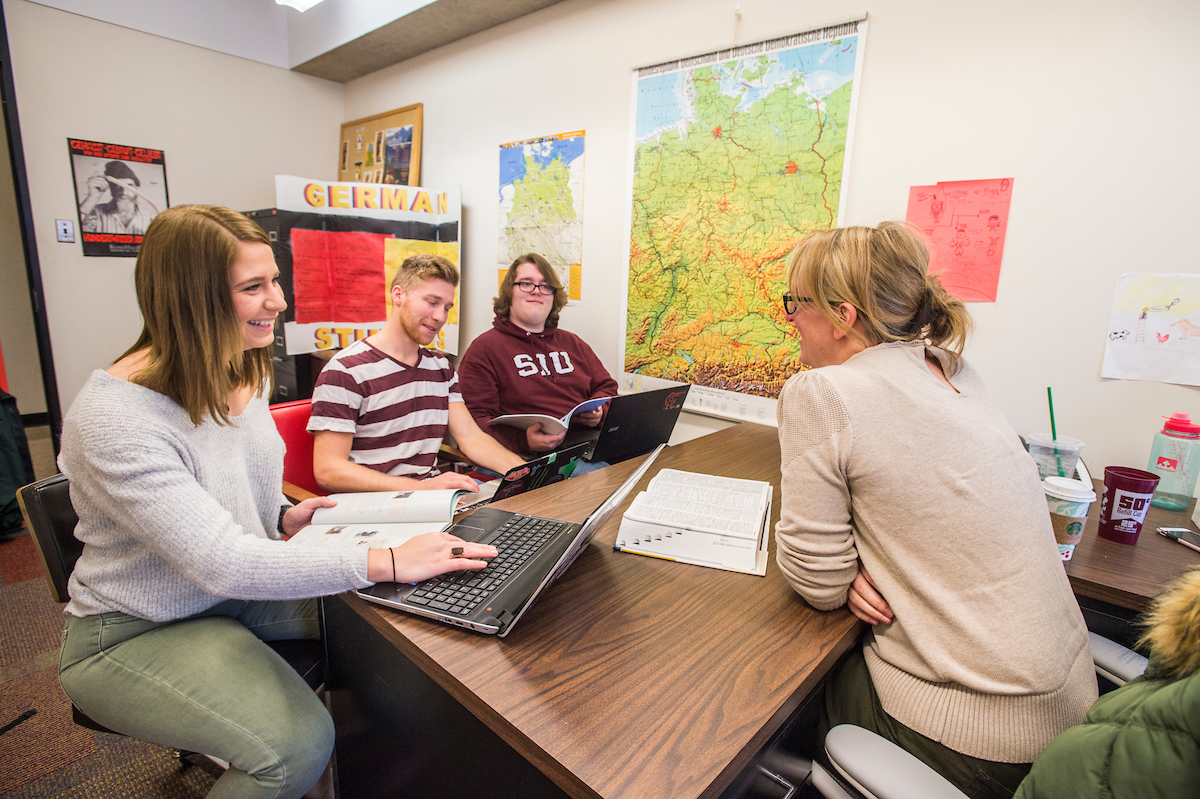 CARBONDALE, Ill. —Since the moment World War II ended, most of the global conversations have focused on the countless men who heroically fought against the Nazi Regime. While their stories speak of bravery and valor, so do the many near-forgotten accounts of courageous German women who sometimes quietly, and sometimes boldly, stood against the evils of the Third Reich.

Concerned with history’s depiction of these almost unknown women, three students at Southern Illinois University Carbondale are carefully researching and translating the remarkable tales of sacrifice, courage and bravery, and are gearing up to finally share the stories with the English-speaking parts of the world.

The translation project first began as a class assignment under the guidance of associate professor of German, Carola Daffner. The students, Benjamin Reese, Spencer Blake and Leia Ruebling, were tasked with translating a set of biographies that a group, the German Resistance Research Council in Frankfurt, Germany, had gathered for a special exhibit.

At the beginning, the students did not anticipate much more than a normal homework assignment. However, as the translation progressed, the three grew amazed and enamored with the remarkable stories of the women they studied, and knew the legacy of these women needed to expand past the bounds of a single German exhibit.

For Reese, junior in the German education degree program, uncovering the bravery of so many women is not only inspiring, but also an important way to recognize the contributions these women had on the world.

“A lot of people don’t know it, but women played one of the biggest roles in World War II in Germany,” Reese said. “The truth is, these women would risk their lives to provide for their families.”

As slightly less noticeable at the time, German women often had more freedom to work and venture outside of their homes. What is often forgotten is how many times these women took opportunities to assist others and work behind-the-scenes to resist the Nazi Regime. Even when faced with possible imprisonment, capture or death, many continued to stand against the pressure.

“The women were actually the ones doing most of the hard labor at the time,” Reese said. “That’s something that a lot of people look over, but it is something that needs to be known.”

Now, after so many years, Ruebling, senior in the German studies degree program, believes it is time to give these women the credit they deserve.

“This is a really big stepping stone, because women weren’t talked about in World War II,” Ruebling said. “Often you only hear about the women who stayed at home or did nothing during the war, but this is the other side, portraying the women who fought and were actively resisting.”

After realizing the larger implications of their work, the team of SIU students are devoted to finishing the translation and putting these women back in their rightful spot of history.

“This is a piece of history that needs to be recognized,” Reese said. “And we are going to try and do just that.”

Translating as a group to increase accuracy

Until now, these remarkable stories had never been available outside of Germany. The obvious challenge for the students is carefully and accurately taking the German exhibits, and translating each section properly into English. German words can often have four or five different meanings, Reese explained, so the easiest way to ensure accuracy is to work together until each piece is fully comprehendible.

When the students have differing opinions on the correct translation of a word, they bounce ideas back and forth until reaching a firm consensus.

“Everybody has their own twist on translating,” Ruebling said. “When we all come together with our own logical ways that we translate, sentence by sentence or word by word, it’s like a big puzzle.”

This is the first time these stories are being translated into English, Daffner explained, so the student’s process of group discussion and collaboration is an excellent way to preserve the validity, while also pushing the students in their own language development.

Each individual biography is outlined on a panel, and the students work story-by-story to unearth each woman’s experiences.

“The translation itself is interesting,” Blake, senior in the German education degree program, said. “Because as you are learning about what all these women did, it’s almost uncovering itself as we go along. It’s very informative and exciting.”

Overcoming stigmas and educating their peers

Beyond the struggles of accurate translation, the students face a more unexpected challenge related to racial stigmas. For Ruebling, it is not just the language that is difficult, but also the many negative connotations that are still associated with it.

“It’s hard to tell people you speak German, because they will immediately bring up World War II, the Nazis or how angry the language sounds,” Ruebling said. “And that makes it difficult from a different aspect.”

While this stands as one of the biggest roadblocks for the students, one of their goals is to use these stories to break down those mindsets in their peers.

Similar to the exhibit the SIU students are working with, the German Resistance Research Council released an exhibit highlighting the remarkable stories of teenage resistance. In 2012, a group from the University of Missouri-St. Louis translated the exhibit, and it has been on display in various locations since then.

SIU’s German section is set to bring that exhibit to campus in honor of SIU World Language Day, Apr. 4, 2019. The exhibit will be on display April 1-19 at Morris Library in the Hall of Presidents, and is free and open to the public.

On April 4, Reese, Ruebling and Blake will give a presentation on their upcoming completion of the women’s exhibit, and provide participants with a sneak peek of their work. For more information about the exhibit or World Language Day, contact Carola Daffner at cdaffner@siu.edu.