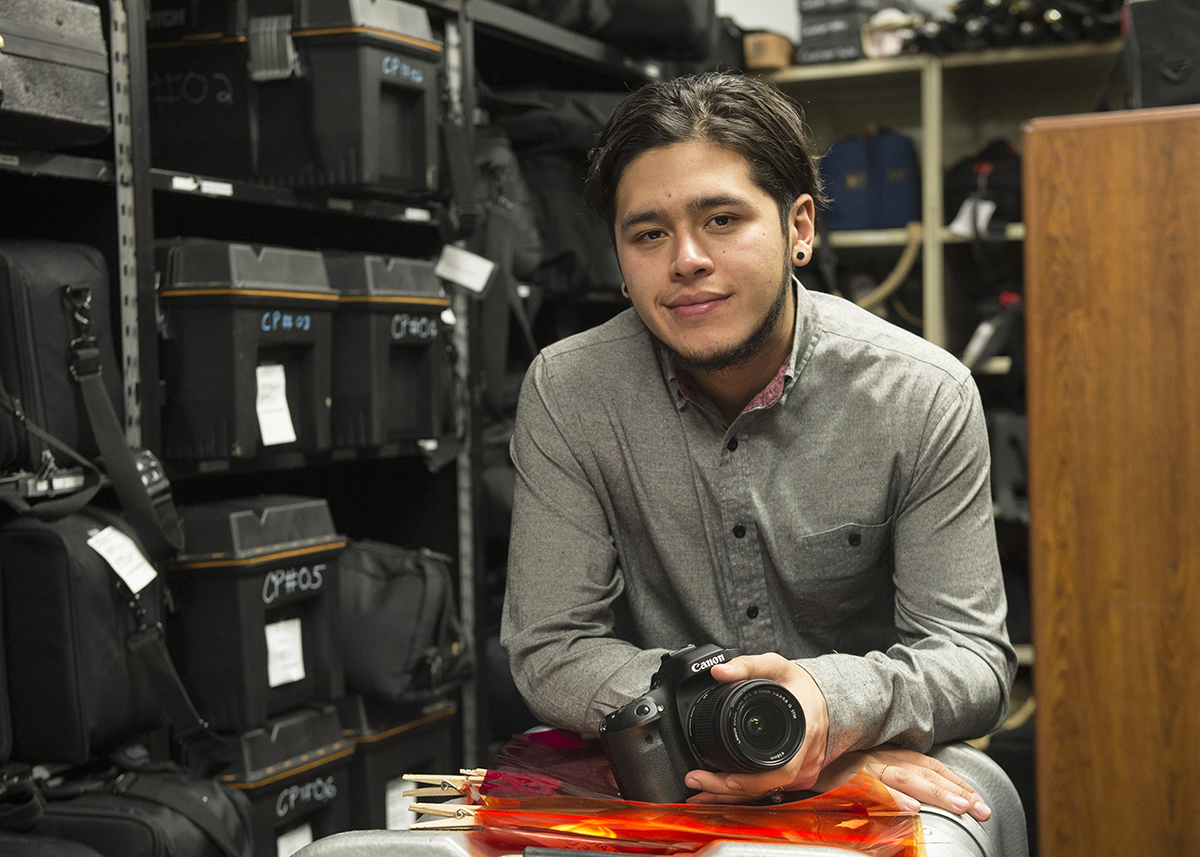 Focused on the future – Giovanni Galindo, a senior in cinematography who moved to Peoria, Illinois, from Mexico City, Mexico, when he was six years old, will earn his bachelor’s degree Saturday at Southern Illinois University Carbondale commencement exercises. (Photo by Russell Bailey)

DACA student sees only positives from earning his cinema degree

CARBONDALE, Ill. — There have been struggles and uncertainty the last 15 months for Giovanni Galindo, but the Southern Illinois University Carbondale senior kept everything in perspective.

Galindo will graduate Saturday with a bachelor’s degree in cinematography and then prepare to move to Burbank, California to pursue a career in screenwriting and filmmaking.

Galindo, who is from Mexico City, Mexico, moved with his family to Peoria in 2003 when he was six years old and did not speak English when he arrived. Yet Galindo, a 2015 Richwoods High School graduate, said his faith and a focus toward his career is resolute.

Galindo, 21, approaches a move to California with confidence, which he credits to his faith and trust in God that “everything happens for a reason.” Galindo came to SIU in fall 2017 and sees his education and graduation from college as an achievement of dreams that his parents had for him.

“You have to follow your dreams,” he said. “Even If I go there and I have to find a regular job. It’s not what I want to start, but it will be fine with me because I will still make movies when I can.”

Will participate in commencement exercises

Galindo will be one of nearly 1,300 candidates to graduate at commencement exercises at 2 p.m. on Saturday at the SIU Arena. His parents, Claudia and Agustine Galindo, will be among families and friends celebrating the achievement.

While attending college was at times a financial struggle, Galindo credits his family for their support. Because Galindo is part of the Deferred Action for Childhood Arrivals, or DACA program, he was unable to receive any type of federal aid, including grants and student loans, so he relied on his family, jobs and several scholarships for financial support to complete his education. He also works as a resident assistant in University Housing.

“It was scary to know I had to find my own money or scholarships and that’s not always a guarantee,” he said.

Galindo was featured in a documentary “I, Too, Dream American” a film by Tomas Cortez, a junior in cinematography. The film highlighted difficulties that undocumented students face. He was the inaugural recipient of the university’s DACA Student Assistance Award. Debra Sarvela, director of the university’s Center for Environmental Health and Safety, established the scholarship.

Found an ‘investment’ by faculty in his career

Galindo earned his associate degree in cinematography and film/video production from Illinois Central College last year before transferring to SIU Carbondale in fall 2017. He chose SIU Carbondale due to its cinema program and affordability.

What he also found was integral support from faculty and staff.

“There has been a lot of investment I have felt from the professors in my work,” he said. “They want to see me progress and get better. You can feel their support.”

While some believe that a college education isn’t needed to be a filmmaker, Galindo disagrees.

“Coming to college you get both the production and analytical and I feel when you get both of those you are able to create better movies,” he said.

A sharing of cultures

Galindo is in the process of renewing his DACA protection, which expires in February. When talking with other DACA students, Galindo said that while they each have their respective cultures, the identity is largely American.

“Maybe not on paper, but we are Americans, nonetheless, too,” he said. “It’s almost like a subculture of people we have created who came here really young but they share both cultures equally.”

A ‘gifted student’ who wants to pursue screenwriting

Cade Bursell, a professor in cinema and photography, said Galindo is “a hard-working, talented yet humble person.” She appreciated his eagerness to explore the breadth of cinematic storytelling.

“His beautiful, quiet and meaningful stories have been about resilience, love and hope, qualities that he also embodies,” she said. “I am so happy I had an opportunity to work with him.”

Angela Aguayo, an associate professor in cinema and photography, has been Galindo’s mentor. He is “insightful, motivated and his energy draws people toward his work,” she said.

“His perspective and unique insights into modern life is what we need to see more of on the cinema screen,” Aguayo said.

Galindo has made several short films and videos while at SIU. A screening of his film, “Shoot ’Em Up, Gavin” premiered Nov. 29. The 24-minute film examines depression and what drives a person to reach a point to where they embark on a mass shooting spree. Galindo wrote the script and the film used his original music.

“I was interested in creating a film that talks about something prevalent in society,” Galindo said.

Hong Zhou, Galindo’s cinematography instructor, said the film shows Galindo’s talent and capabilities in weaving together screenwriting, directing and production skills. Another of Galindo’s strengths is a willingness to help with other students’ film projects, Zhou said.

“I am hopeful that he will continue to grow as a writer and filmmaker and make more personal and meaningful films in the future,” he said.

Galindo plans to enter the film in upcoming film festivals.

Has a ‘peacefulness’ about him

Cristina Castillo met Galindo through the Hispanic Student Council in 2016 when she was an adviser for the organization. Castillo said she still wonders where his “peacefulness” comes from. Galindo is a student who “lives in the moment and puts liveliness into his daily life.”

Galindo shows up to every Hispanic/Latino-sponsored event, always brings a camera, and participates in various events around the community, Castillo said. Galindo who founded GG Films Productions, plays the piano and guitar and composes and produces his own music and videos.

Castillo, coordinator of the Hispanic/Latino Resource Center and the First Scholars Program, played a short part in Galindo’s film. She sees it as reaffirming Galindo’s sense of understanding societal issues and a “desire to see positive heartwarming outcomes for society.”

Even while touching on issues that include guns, mental health, depression opioid addiction, faith and religion, the film provides audiences with an unpredictable outcome, she said.

Galindo wants to focus on screenwriting. He is interested in “creating art that you are passionate about instead of going to work for someone else.”

“I like movies that are entertaining but movies that also make you think,” he said. “When you write for film you want to be able to send a message.”