Mitchell Hill Shows What It Means to Be Saluki Strong

CARBONDALE, Ill – After being diagnosed with a brain tumor at the age of two, it was unclear if Mitchell Hill would ever live a normal life. Forty MRI’s and three brain surgeries later, and Hill is preparing to graduate from Southern Illinois University Carbondale with a degree in Communication Studies.

During his time at SIU, Hill has been hard at work with more than just coursework. In the last year, he has raised over $10,000 to help other children who suffer with similar challenges to find a little ease in the long journey.

The biopsy and removal of the brain tumor left Hill initially with an 85% paralysis on the left side of his body. A second surgery added a shunt to repair a damaged ventricle, allowing excess fluid to drain from his brain. Hill’s determination and commitment to ongoing rehabilitation has allowed him to regain functionality and live a life typical to most 22-year-olds.

Hill has had many opportunities to give support to other children who were also suffering, but it wasn’t until his time at SIU that he really felt ready to get involved.

"Over the years, I had many opportunities to fundraise for Children’s, participate in brain tumor studies, and to just give back in general,” Hill said. “However, I turned them down when I was younger because I didn’t feel ready for that responsibility. For about a year now, thanks to the skills, knowledge, and confidence I have obtained at SIUC, I have been in contact with the fundraising sector at Children’s Circle of Friends Program, and they have helped me develop fundraising campaigns."

Those campaigns have turned into a $17,400 project to upgrade MRI rooms at the Ann & Robert H. Lurie Children’s Hospital in Chicago. Remembering those days of continual MRIs, Hill felt compelled to do what he could to ease the discomfort for others.

“Scans last several hours, and the machines are cold, sterile, and intimidating,” Hill said. “By customizing the equipment with animal murals and other artwork, children feel more relaxed.”

“I realized something was wrong when I was giving a presentation in a course and was experiencing double vision,” Hill said.

After finishing the class period, Hill went to the hospital for an examination. Doctors determined he needed immediate surgery to replace a faulty shunt, which included five separate incisions. True to form, Hill was back to class in less than two weeks to finish his final semester.

After graduation, Hill will either continue his education with an MBA degree, or pursue a job with a company he interned with over the summer. Wherever he ends up, Craig Engstrom, director of undergraduate studies for communication studies, is confident Hill will find great success.

“Hill is a survivor and works hard, that is obvious,” Engstrom said. “You won’t find too many people who can have brain surgery and be emailing you two days later for help with a résumé.” 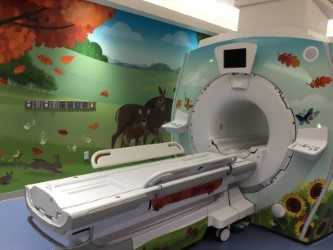