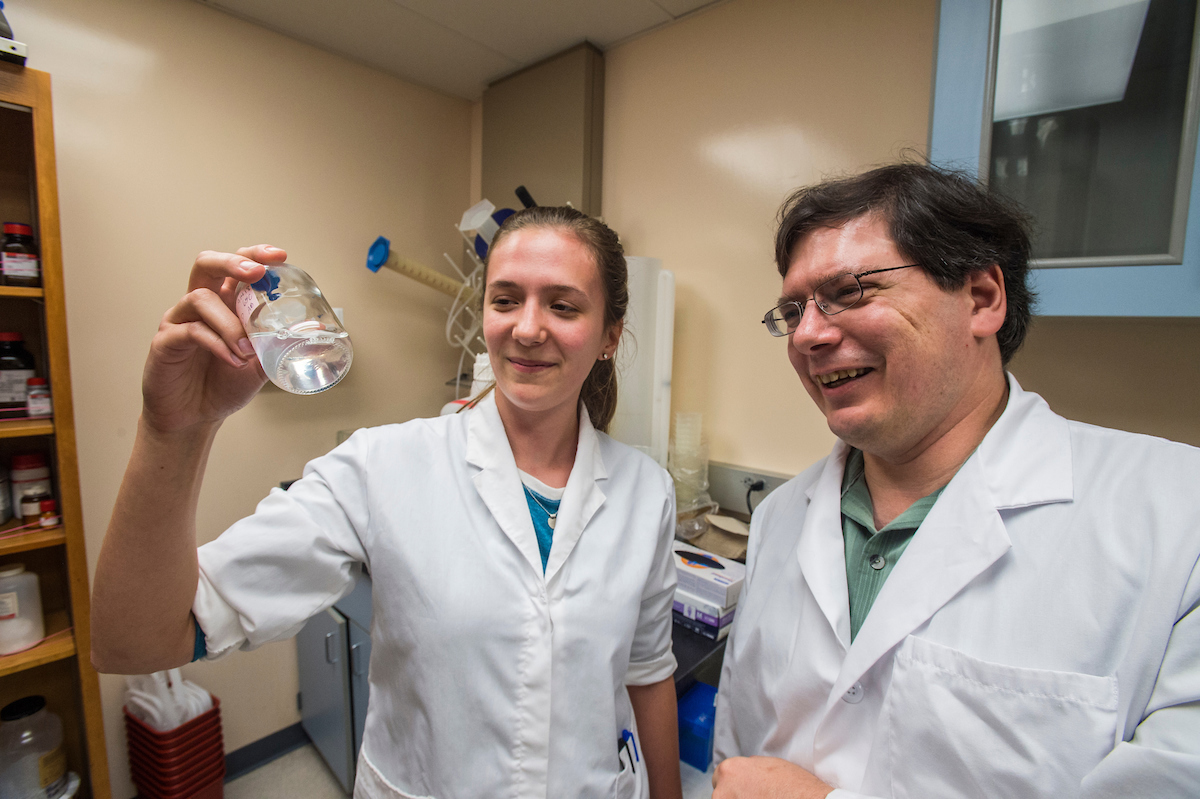 Amanda Blocker, senior in microbiology, and Scott Hamilton-Brehm, assistant professor of microbiology, look at a sample in a laboratory at Southern Illinois University Carbondale. Working under the guidance of Hamilton-Brehm, Blocker is studying a microbe that he isolated from a 900-meter-deep borehole located on the border between California and Nevada. The novel anaerobic microorganism, designated “SIUC-1,” loves hot temperatures, thriving at 150 degrees Fahrenheit. Blocker’s successful characterization of SIUC-1 would make her one of the few researchers in the world who will have named the first novel bacterium of a phylum.

CARBONDALE, Ill. – Life: You find it in the darnedest places, and in all its weird glory.

Now the challenge for a student in the microbiology program at Southern Illinois University Carbondale is keeping it alive to study where it fits within the tree of life.

Working with a REACH grant from the university, Amanda M. Blocker is tending to a bacterium isolated from a 900-meter-deep borehole located on the border between California and Nevada.

Previously known only to exist by DNA sequencing, the bacterium has been cultured for the first time at SIU, and has been given the strain name SIUC-1.

And one of the weird things about SIUC-1 is that it thrives at a temperature that would kill many other things: 150 degrees Fahrenheit.

Under the guidance of her faculty mentor, Scott Hamilton-Brehm, assistant professor of microbiology, Blocker is in the process of characterizing the microorganism, sequencing its genome, and finding the optimal conditions to culture it. They want to understand where the microorganism fits within the world’s ecosystem, and whether it controls critical geochemical processes of the deep subsurface.

Blocker started the project back in spring 2017, initially investigating what subsurface microbes could be enriched using the artificial sweetener xylitol as a carbon and energy source.

Once she started turning the temperature up, however, the bacteria sample began to grow, allowing her to run genetic analysis. That’s when it became apparent it was something special.

SIUC-1 belongs to the candidate phylum “Atribacteria OP9,” which is a taxonomic description below domain. You may recall from your biology classes that there are three domains: Bacteria, Archaea, and the one to which humans belong, Eukarya.

“My microorganism is the first ever cultured in this particular phylum,” Blocker said. “With the help from my REACH award, I am hoping to learn how its metabolism and physiology help it survive deep underground and why it has been able to evade cultivation for so many years. And because it’s a novel subsurface microbe, I hope to be able to discover whatever hidden mechanisms it may have.”

Discovery puts Blocker in a new class of researcher

Dangling sponges at the end of a very long string, Hamilton-Brehm collected the original environmental samples that contained the strange microorganism from the borehole while working with NASA’s Astrobiology Institute in a project titled “Life Underground.” Blocker’s successful characterization of SIUC-1 would make her one of the few researchers in the world who will have named the first novel bacterium of a phylum.

Most of her work takes place in the laboratory, where Job One is maintaining the SIUC-1’s health. Because almost nothing is known about it, all standard operating procedures don’t apply, and Blocker is essentially making new discoveries about its care and feeding all the time.

Some of things she’s learned: Oxygen kills it (it’s a strict anaerobic) and even a hot summer day isn’t nearly warm enough for it (it ‘freezes’ at room temperature).

Once she knows more, full characterization can begin, including finding its optimal growth temperature, its preferred carbon source for growth, complete DNA sequencing of the genome, electron microscopy imaging, and giving SIUC-1 a formal scientific name while still keeping the strain name (the full name will be immortalized).

“All of this information will help me to understand, on a fundamental level, how SIUC-1 survives and functions in the Earth’s subsurface,” she said. “Because it is a new phylum of bacteria, there could be many more discoveries such as new genes that could be important to industry, medicine or environmental remediation. The subsurface microbiome is also considered ancient, slow to evolve, and may hold hints to the origin of life on our planet.”

SIU emphasizes involving undergraduate students in real research as early as their freshman year. Blocker said having such an opportunity has helped her in many ways.

“It allows me to explore my interests in microbiology, take what I learn in class and apply it to a real world setting, and develop essential skills such as proposal writing and scientific communication,” she said. “I hope to work in industry as a research and development scientist. The opportunity to do undergraduate research is helping me achieve this goal, because it prepares me with the skills and experience that companies are looking for.” 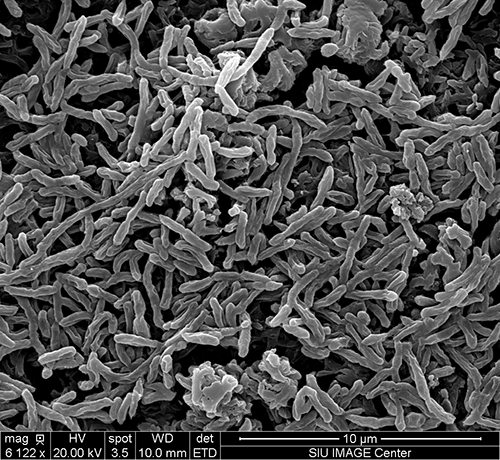