SIU to host lectures on human trafficking in Illinois, human rights and social media in Myanmar

CARBONDALE, Ill. -- Human trafficking in Illinois is the focus of a presentation Thursday at Southern Illinois University Carbondale.

Kimberly Palermo, a health policy specialist in the SIU School of Medicine’s Department of Population Science and Policy in Springfield, will present “Human Trafficking, Too Close to Home.” The lecture is at 7 p.m. in the University Museum auditorium on campus.

The lecture is free and open to the public.

A Nov. 8 lecture featuring Lisa Brooten, associate professor in the Department of Radio, Television, and Digital Media, also sponsored by the United Nations Association USA, Southern Illinois Chapter, will look at social media’s role in the continuing conflict in Myanmar.

In August 2017, Palermo, then a visiting scholar at the Institute, provided testimony before the bipartisan Illinois Human Trafficking Task Force. A spring 2017 Institute poll included questions that Palermo developed to gather data regarding the public’s awareness on trafficking of children, men and women. Palermo’s research and expertise helped to inform the task force and the Illinois Department of Children and Family Services and develop new strategies to assist victims, according to Pamela Umlauf-Brown, president of the United Nations Association Southern Illinois chapter.

Palermo currently serves as a member of the Central Illinois Human Trafficking Task Force and as a board member of Butterfly Dream Alliance in Breese, Illinois.

Brooten will discuss “Human Rights, Social Media and Violence: Facebook and the Rohingya of Myanmar” at 5 p.m. Nov. 8 in the University Museum auditorium. Brooten said social media, including Facebook “has played an increasingly important role in the country’s public sphere.” Muslim Rohingya people have been fleeing Myanmar, a majority Buddhist nation, in what a U.N. Human Rights official has called a “textbook case of ethnic cleansing.”

The presentation will discuss both the opportunities and challenges facing social media users in contexts of conflict and violence, the responses of Facebook's team in addressing major concerns about its role and responsibilities, and the implications for human rights in Myanmar and elsewhere around the world, Brooten said.

A recent focus has been the forum’s use in spreading hate speech and inciting violence against the Muslim Rohingya people, Brooten said.

In collaboration with the university, the Southern Illinois United Nations Association chapter has been holding a series of exhibits and activities at University Museum through Dec. 15 recognizing the 70th anniversary of the Universal Declaration of Human Rights. December 10 is recognized as “Human Rights Day.” 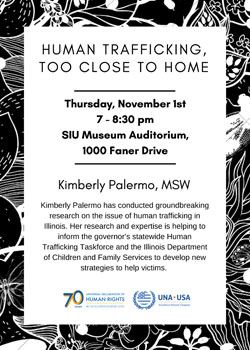