CARBONDALE, Ill. — Longtime state government and political analyst Jim Nowlan will offer an assessment of Illinois’ past struggles and future challenges during a lecture at Southern Illinois University Carbondale next week.

Nowlan, who considers himself a “jack-of-all-trades” in government and politics, will present “Illinois’ Hard Half Century and the Way Ahead” at 6 p.m. on Oct. 24 in Student Center Ballroom A.

Sponsored by the Paul Simon Public Policy Institute, the event is free and the public is invited.

Reporters, photographers and news crews are welcome to cover the lecture. To arrange for interviews or for more information on the event, contact Cary Day, Paul Simon Public Policy Institute, at 618/453-4009.

John T. Shaw, Institute director, notes Nowlan, who is from Toulon, has written for several decades on Illinois’ challenges and opportunities.

“Jim Nowlan is one of the wisest and most constructive analysts of Illinois politics and government that you can find. Jim is a true Prairie State gem,” Shaw said. “He has done it all and has much to say about our state’s past and future.”

Nowlan has taught courses in public management and American government at the University of Illinois at Urbana-Champaign, Knox College, and Western Illinois University.

He was a senior fellow at the University of Illinois’ Institute of Government and is president of Stark County Communications, which publishes several community newspapers in central Illinois. He is a former chair of the Illinois Executive Ethics Commission. He is also author of several books on Illinois politics, including “Illinois Politics” and “Fixing Illinois.”

Illinois Hard Half Century and the Way Ahead 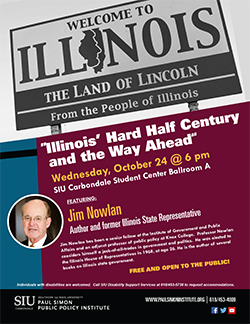