Published in May, the book examines the impact of the change in leadership that “symbolized, and triggered, a generational shift in American politics, policy and culture.”

Shaw will discuss the book with C-SPAN Book TV. The segment will then be broadcast later in October and available on its website.

There will also be a book signing after the taping.

Prior to becoming institute director in January, Shaw was a 26-year veteran congressional reporter with Market News International and covered political and economic issues for the global news service.

He was a contributing writer for the monthly magazine The Washington Diplomat for the past 20 years. Shaw’s “People of World Influence” column profiled international affairs leaders including Colin Powell, Madeleine Albright, James Baker, Sam Nunn and Zbigniew Brzezinski.

Shaw is the author of five books including “Richard G. Lugar: Statesman of the Senate” and “JFK in the Senate: Pathway to the Presidency.”

A native of Peoria, Shaw earned his bachelor’s degree in political science from Knox College in Galesburg. He earned his master’s degree in history from the University of New South Wales in Sydney, Australia and did graduate work in international relations at The Johns Hopkins University School of Advanced International Studies.

He has been a congressional analyst for media outlets including C-SPAN, ABC’s “20/20,” “The PBS Newshour,” and SkyNews Australia. 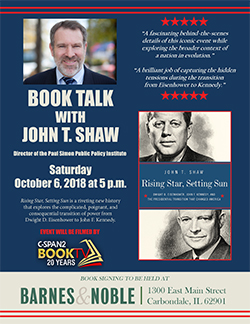