CARBONDALE, Ill. — An acclaimed author on the U.S. Senate and international trade policy expert who played a critical role in negotiating the North American Free Trade Agreement will discuss challenges facing the nation next week at Southern Illinois University Carbondale.

Former U.S. Ambassador Ira Shapiro will present “Where Have All the Statesmen and Stateswomen Gone?” at 7 p.m. Sept. 26 in the Student Center Auditorium. Shapiro’s presentation is part of the Morton-Kenney Public Affairs Lecture Series presented by the Paul Simon Public Policy Institute and the Department of Political Science.

The lecture is free and the public is invited.

Reporters, photographers and news crews are welcome to cover the lecture. To arrange for interviews or for more information on the event, contact Cary Day, Paul Simon Public Policy Institute, at 618/453-4009.

Shapiro is president of Ira Shapiro Global Strategies, LLC, a firm that specializes in international trade, U.S.-Japan relations and American politics, and a senior adviser with the Albright Stonebridge Group.

He was the principal U.S. trade negotiator with Japan during President Bill Clinton’s administration and chair of the National Association of Japan-America Societies. In 1993, Shapiro became general counsel to U.S. Trade Representative Mickey Kantor, where he played a key role in negotiating and gaining legislative approval of NAFTA and discussions that created the World Trade Organization and other trade rules.

In 1995, Shapiro was approved for ambassadorial rank and was the principal chief negotiator with Japan and Canada, helping complete several major bilateral trade agreements with two of the nation’s leading trading partners.

Will discuss need for leadership from both political parties

Shapiro is expected to discuss the “critical need for high-level leadership from both parties during this important moment in American history,” John T. Shaw, Institute director, said.

“His perspectives on the challenges our nation now faces will be stimulating and provocative,” Shaw said.

Shapiro to meet with students while on campus

Shapiro will meet with the Paul Simon Public Policy Institute’s student ambassadors to discuss his career in politics, trade diplomacy and writing.

Shapiro is the author of the critically acclaimed books on the U.S. Senate, “The Last Great Senate: Courage and Statesmanship in a Time of Crisis” and his 2018 book, “Broken: Can the Senate Save Itself and the Country?”

Shapiro has appeared on C-SPAN, including in March 2018 to discuss his latest book. He writes frequently on U.S. politics, particularly the Senate, and his articles have been in publications including The New York Times, Bloomberg Review and cnn.com.

Shapiro is the 44th lecturer in the series that began in 1995. The Morton-Kenney lecture series brings speakers to campus in the spring and fall of each year.

The late Jerome Mileur, originally from Murphysboro, was a professor emeritus in political science at the University of Massachusetts-Amherst and retired in 2004 after a 37-year teaching career there. He established the series in 1995 in honor of two of his political science professors — Ward Morton and David Kenney — who inspired him as a student.

Mileur, who died in September 2017, earned his bachelor’s degree in speech communication in 1955, and a doctorate in government in 1971, both from SIU Carbondale. 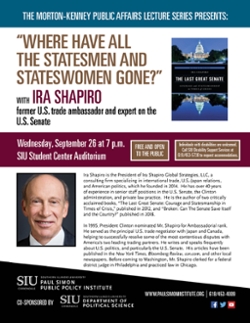 “Where Have All the Statesmen and Stateswomen Gone?”