CARBONDALE, Ill. — Saluki Comic Con, campus tours, movies indoors and out, a craft sale, Greek Sing, recreational activities, and of course, tailgating, football and much more will be happening on the Southern Illinois University Carbondale campus during Family Weekend, Sept. 28-30.

The three-day celebration will “Celebrate Our Incredible Saluki Family” with fun activities and opportunities to make great memories.

Many things to do

A wide variety of activities are on tap for family weekend, designed to appeal to all ages and interests. Most are free.

Highlights of the weekend include:

The stars are out for Saluki Comic Con 2018

The Saluki Comic Con, in its second year, runs all weekend long and features a wide array of special guests, vendors and artists along with a costume contest, games and tournaments. A few of the many star guests are:

You could win Family of the Weekend honors

Now is the time to enter to become the 2018 Family of the Weekend. Simply complete an online questionnaire and quick quiz and you could be honored during the festivities.

The winning family receives a prize package that includes box seats for the football game, Saluki family apparel, tickets to all of the weekend’s events and a weekend stay at the Hampton Inn.

The Petraski family, (business management major Sarah and her parents Ken and Maureen) of Plainfield, earned the honor in 2017.

Buy early to save

Purchase tickets at discount prices for the football game and Saluki Comic Con and pre-order Family Weekend and Comic Con T-shirts online through 9 a.m. on Sept. 21.

Check it all out online

Find the complete schedule of events and additional details online. 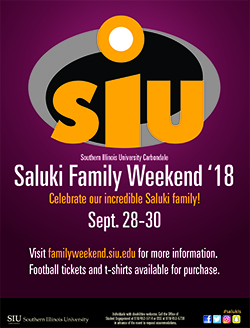