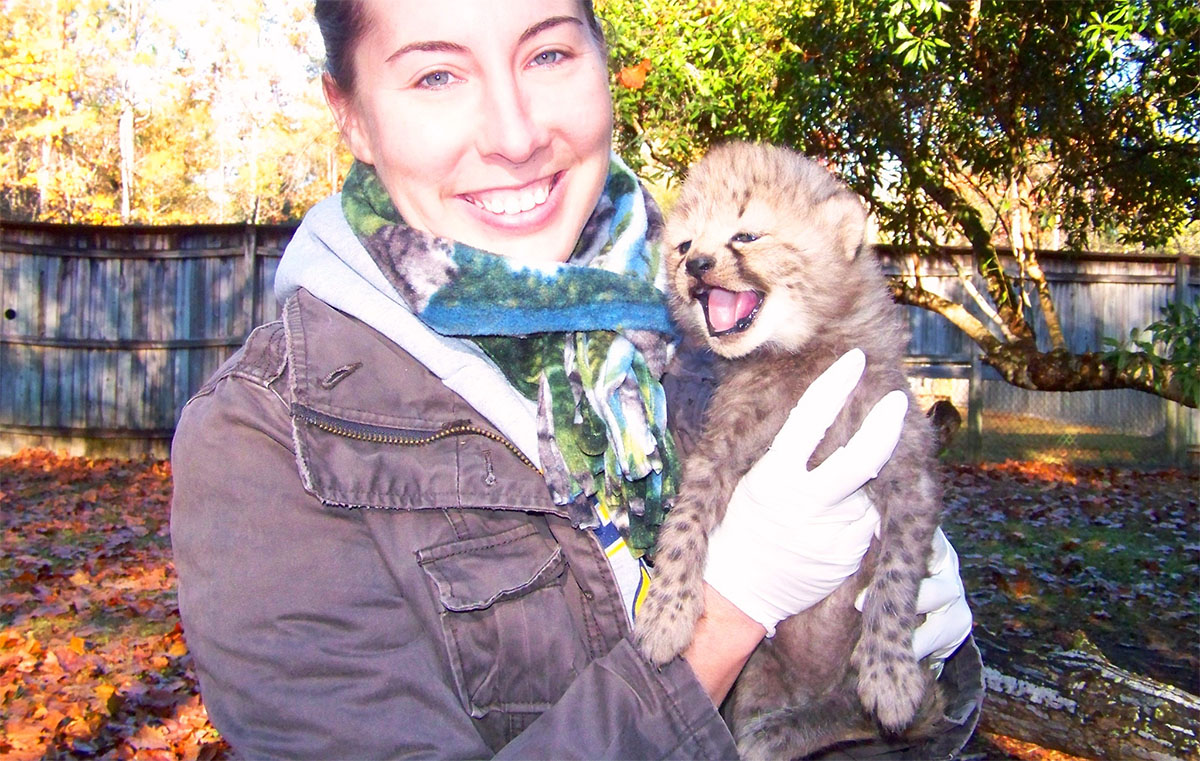 CARBONDALE, Ill. – It turns out, female cheetahs are quite picky about their mates. And when they’re allowed to choose them, the chances of healthy offspring improve.

A former graduate student at Southern Illinois University Carbondale recently published a study that explains at least one factor female cheetahs use to make those choices. The findings may lead to improved captive breeding programs for the big cats.

Regina Mossotti began work on her master’s thesis in zoology at SIU back in 2009. In the time since, she’s conducted research on wolves in Yellowstone National Park and mountain lions in California. She currently works as director of animal care and conservation at the Endangered Wolf Center near St. Louis, a world-renown facility that has helped save three species from extinction.

Her recently published master’s thesis has garnered attention in biology circles for its potentially game-changing findings regarding cheetah mating preferences.

In what was the first ever mate-choice study using urine with a mammalian carnivore, Mossotti tested whether female cheetahs expressed a preference for certain males. Interest was measured by the amount of time the female cheetahs spent investigating the male’s urine scent.

Along with her research partners, Mossotti discovered the females were most attracted by urine from male cheetahs that were unrelated to them, and therefore the best choice for mating.

Since its June publication in the journal Zoo Biology, the study has gained national attention from other high-profile media such as The Scientific American.

Mossotti said she undertook the study at SIU because animals in human care, in zoological and conservation centers, play a critical role in wildlife conservation.

“Having a genetically healthy population in zoos is vital to these conservation efforts,” she said. “And that means breeding has to be successful.”
Genetic variation in cheetahs has become low because of population decline and fragmentation, mostly due to human activities. And hough zoos throughout the world manage captive cheetahs with breeding programs aimed at maximizing genetic diversity, they have not been consistently successful.

In most cases, captive breeding programs rely on a genetic database to choose cheetah mates. On paper, so to speak, the male and female look like a good match.

“But what we were seeing is that the females were at times rejecting males,” she said. “Sometimes when the new mate was introduced the animals would fight, which occasionally lead to injury and even death.”

“The loss of one individual in an endangered population is devastating,” Mossotti added. “Finding a way to increase compatibility of the pairs for the breeding program is essential.”

Mossotti knew that larger institutions with larger cheetah populations were having more success, likely owing to their larger populations, which in turn makes it possible for females to choose their own mates. But she wanted to understand how they were making their choices.

“We have seen from other small mammal studies – mice, for instance – that urine can share a lot of information,” she said. “It’s basically the Facebook or Tinder of the animal world. The urine can tell a female if they are related to the male, if the male is healthy, and other aspects about the male that can help her make a choice.”

There were significant challenges: Unlike mice, getting an appropriate number of samples is difficult with captive large carnivores. Mossotti found herself driving all over the United States, working with more than 20 zoos.

“And all of these institutions were willing to step up, donating their staffs’ time and effort to help because of how important breeding is to successful cheetah conservation efforts,” she said.

“This study was the beginning steps to see if urine could be used as a proxy for a male,” Mossotti said. “Instead of shipping an animal across the country which can be stressful on the animal, and incredibly expensive — and possibly just to have the new pair potentially not be compatible —we could, in the future, send urine instead to see if she reacts more favorably to one male’s scent over another.”

Mossotti foresees further inquiry in which female cheetahs are presented with three “good” matches to see whether the cheetah’s urine preference matches her real-life preference.