CARBONDALE, Ill. — Samantha Newark is the voice of Jem and Jerica on the classic Jem and the Holograms cartoon and part of the Transformers guest-star cast. Trevor Von Eeden is co-creator of the first original black superhero to have his own title and both the first black artist and the youngest hired by DC.

You can meet both, as well as other stars of the comics industry at Southern Illinois University Carbondale’s Saluki Comic Con 2018.

The inaugural SIU event, Eclipse Comic Con, was such a huge success in August 2017 that organizers decided to make it an annual happening.

The 2018 event takes place in the SIU Student Center Ballrooms and will feature vendors, comic artists, a costume competition with cash prizes and trophies, a game room for board and video gamers, special guests and a variety of competitions and informational/educational panels.

Newark and Eeden well-known in industry

In addition to guest-starring roles as “Ariel,” “Elise Presser” and “The Zamajon Empress,” on the Hasbro Transformers brand, Newark can also be heard on Steven Spielberg’s feature “Hook” as the sweet British voice of Peter Pan’s mother.

She played rebel camper Debbie in the horror flick “Summer Camp Nightmare” with Chuck Conners and has been involved in numerous musical projects as well, working as a session singer in Los Angeles, and was invited as a back-up singer  for Leonard Cohen’s “Bricks in the Wall” Pink Floyd tribute.

She’s also well-known for her original songs, vocals and voice-work on various blockbuster game titles, movie soundtracks and television shows, including everything form “God of War” to “Smallville,” from “Twisted Metal: Black” to “The Vampire Diaries” and “The Ellen Show.” Recent projects include narration of the children’s book “Square Zair Pair” and her third studio pop/electronica album, “Hologram.”

Von Eeden’s work includes “The Batman Annual #8,” “Thriller,” The Green Arrow mini-series during the 1980s, and “Black Canary” in the 1990s. “The Original Johnson,” his first self-written/drawn graphic novel premiered in late 2009 to critical and fan acclaim and continues to do well.

A wide variety of regional stars and special guests, representing a cross-section of comic-con areas, will also be appearing and more are being added all the time.

Numerous vendors of all types already are on board for Saluki Comic Con 2018 as well.

To find out more about Saluki Comic Con 2018 and keep track of additional guest stars, special guests, exhibits, games and all the rest, visit https://studentcenter.siu.edu/activities/saluki-comic-con/, or email eclipsecon@siu.edu.

Information about all of SIU’s Family Weekend activities for Sept. 28-30 is available online. Or, contact Vamsi Manne, Student Center associate director, at 618/453-1315 or vmanne@siu.edu. 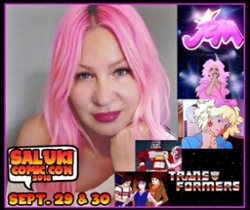 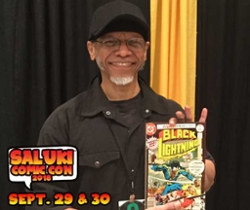