CARBONDALE, Ill. — Morris Library, the state-of-the-art hub for research, study and social activity at Southern Illinois University Carbondale will be the site of a special ceremony and dedication to honor a young man who gave his all for the facility.

The campus and community will pause this week to recognize Willie Jim “Jimbo” Slaughter, a Carbondale man, who died June 20, 1963, the day after a tragic fall suffered during construction of the facility.

The public is invited to a special ceremony at noon on Saturday. A new memorial bench installed outside the northwest corner of the library will be dedicated in Slaughter’s honor. The bench will feature a bronze plaque telling his story.

Friends and staff of Morris Library and the residents of northeast Carbondale, the community in which Slaughter lived when he died, came together to raise the money to fund the project.

A project brought to life by the community

Walter Ray, associate professor of Library Affairs, said during Carbondale’s Martin Luther King Day breakfast in 2017, he was approached by Walter Green, a resident of the northeast side of Carbondale, asking if the library had ever given thought to recognizing Slaughter.

Ray and library officials researched and quickly decided it was long overdue. Fundraising efforts began in the community and at the library and the result is the Willie Slaughter memorial bench.

Slaughter was just 25 and working as a laborer for a masonry sub-contractor on the library construction project when a bricklayer’s scaffold tipped, causing him to fall from the roof of the seventh floor to the third-floor roof about 56 feet below.

He passed away the next day in a St. Louis hospital, leaving behind wife Joyce and two toddlers — daughter Penelope and son Jimothy. He was also survived his father, Henry T. Slaughter, of Carbondale, and five sisters and four brothers.

Fitting honor for someone who helped others

The dedication is a “great honor” for the Slaughter family and a fitting tribute to a man who gave much to others, according to James Slaughter, Willie Slaughter’s older brother.

“He was fearless, he would challenge anything,” James recalls. “He was very helpful in the community, too. He did a lot of work for other people, like gardening and giving away his harvest. He was a hard-working guy who took care of his family. He was just a great kid.”

“He would love this,” James Slaughter said of Saturday’s event and the bench dedication. “I imagine he’s looking down now and really enjoying this. He would appreciate everything.”

Library completed with no further loss of life

Morris Library, a treasure house of books, periodicals, microforms, journals and historical documents and artifacts, was initially constructed in two phases. The first three floors and basement were finished in 1956. Floors 4-7 were completed in 1964, providing a total of 272,673 square feet. As the library’s services and resources expanded to serve students and the region, the need for an expansion was seen. A 50,000 square foot addition and a complete refurbishment of the building and renovations creating lab, group study and collaborative as well as a modern classroom and additional storage area wrapped up in 2008.

The memorial bench project, the latest addition to the library, was completed at a cost of about $3,000.

Library officials say the date of the ceremony is fitting, in that it is near the anniversary of Slaughter’s passing and also coincides with the Spirit of Attucks annual breakfast, an event for alumni of the now-closed Attucks School, which was located on Carbondale’s northeast side. 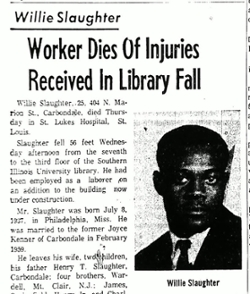 Outside northwest corner of Morris Library on SIU campus