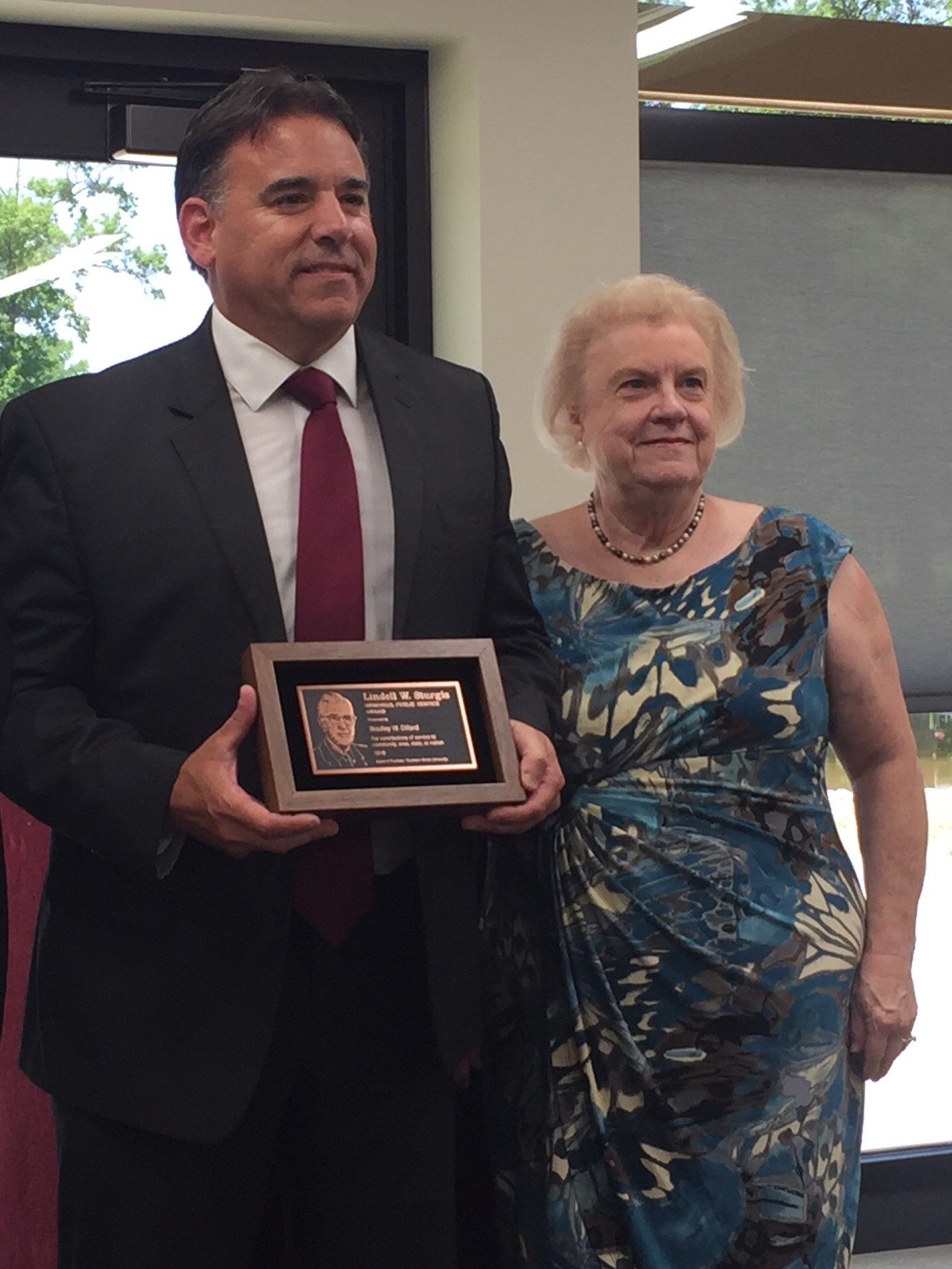 CARBONDALE, Ill. — Finding a way to be involved to better the region is a key focus for Brad Dillard, director of Southern Illinois University Carbondale’s Plant and Service Operations.

With what is truly a 24/7 job on campus, Dillard’s list of seemingly exhausting efforts that range from serving as race director of the iconic River-to-River Relay to working as an auxiliary deputy with the Williamson County Sheriff’s Department earned him the university’s 2018 Lindell W. Sturgis Memorial Public Service Award.

‘Takes all of us’ to assist in community service

‘Always gives the best of himself’

Elizabeth Cheek, an account technician with Plant and Service Operations, nominated Dillard, writing he is one of the university’s “most dedicated and talented citizens whose life is dedicated to the service of others.”

“Brad’s special gift of inspiring others to give the best of themselves by always giving the best of himself further underscores his extraordinary talent as a leader,” wrote Cheek, whose nomination included 14 supporting letters.

Dillard, of rural Carbondale, received the award and plaque during a ceremony June 1 at the recently renovated boathouse on Campus Lake. Former award winners, SIU President Randy Dunn and Sturgis’ granddaughter, Pamela Pfeffer were among those present for the ceremony. Dillard’s name will be added to a plaque that hangs permanently in Anthony Hall.

“I was just overwhelmed to have been nominated and to have won the award particularly when looking over the past recipients,” Dillard said. “When you look at the list I just don’t feel that I am as worthy as some of the contributions that they have made, but I’m just grateful for being nominated and grateful for the committee to recognize my service efforts to the community and university.”

Two-degree SIU graduate whose heart ‘has always been with university’

A rural Carbondale native and Carbondale Community High School graduate, Dillard earned his bachelor’s degree in electrical engineering technology in 1993 and an MBA in 2004. Dillard worked for the physical plant service while a student and started full time in 1989. Previously the department’s associate director, Dillard became director in October 2016 after a national search.

While Dillard had chances to leave through the years, he’s pleased with the opportunities to stay home through a “very unique combination of factors.”

“It’s the people, the university. Having a dynamic research institution in Southern Illinois like we have is incredibly unique,” he said. “Having a lake on the campus is an asset that you don’t see in many places. The beauty of Southern Illinois is just amazing. There is so much to do. The people are so welcoming.”

Dillard has served on numerous university-related committees through the years, including a second stint on the Administrative/Professional Staff Council, of which he is now vice chair. Creek’s nomination lists 27 separate activities and organizations Dillard has worked with dating back to 1987, including volunteer work as an EMT, firefighter and weather watcher. His work includes:

Dillard said he is fortunate that many of his interests and activities interconnect with his job. He also credits the support of his wife Kathy, an assistant director with SIU’s alumni services, and his two children, Morgan and Kristen, who graduated from Carterville High School. Morgan is a third-year medical school student at the University of Illinois-Chicago; Kristen is a junior in the University of Missouri’s fashion merchandising program.

“I was very careful to make sure that they always came first and when the kids were growing up if there was a baseball game or softball game that they were always No. 1 on the list and I tried to fit these types of events around those,” he said. “Now that they are both out of the house, that is when I started getting even more involved and have additional time available to give back to the community and university.”

Importance of the university to volunteer service throughout region

Aside from the economic impact that SIU has on the region, Dillard said another vital component is the important opportunities and roles that university employees have in their communities.

He notes, for example, the three race directors in the River-to-River Relay’s 31-year history each worked at SIU. The race fills the 250 slots within minutes each fall and is listed as one of the top events in “Run This Place: 52 Must-Run Races in North America” by long-distance runner Dane Rauschenberg.

Appreciates the efforts of his employees

Dillard also credits the 292 employees he oversees for their continual efforts. A team of pipefitters worked 17 straight hours about two weeks ago over a weekend to repair a mechanical breakdown with an air conditioning unit on campus.

“Yes, it was part of their job. But to think and expect that somebody is going to spend 17 hours and come right back at it Monday morning … it’s because of their dedication to keep the university going,” he said.

It important to have a team attitude and to let employees know that they are the reason “the place moves forward,” Dillard said.

“I like to think that we are able to pick from the best of the best,” he said. “We have some great employees. But you have to let them constantly know they are appreciated and not take it for granted because it’s not.”

Presented by the SIU Board of Trustees since 1980, the award recognizes SIU Carbondale employees for public service unrelated to their jobs.

The award is named for Sturgis, a Metropolis native who served more than 30 years on the SIU Board, including as board chair from 1969 until retiring in 1971. Sturgis passed away in 1972.

Presented by the SIU Board of Trustees, the annual award recognizes SIU Carbondale employees for public service unrelated to their jobs.