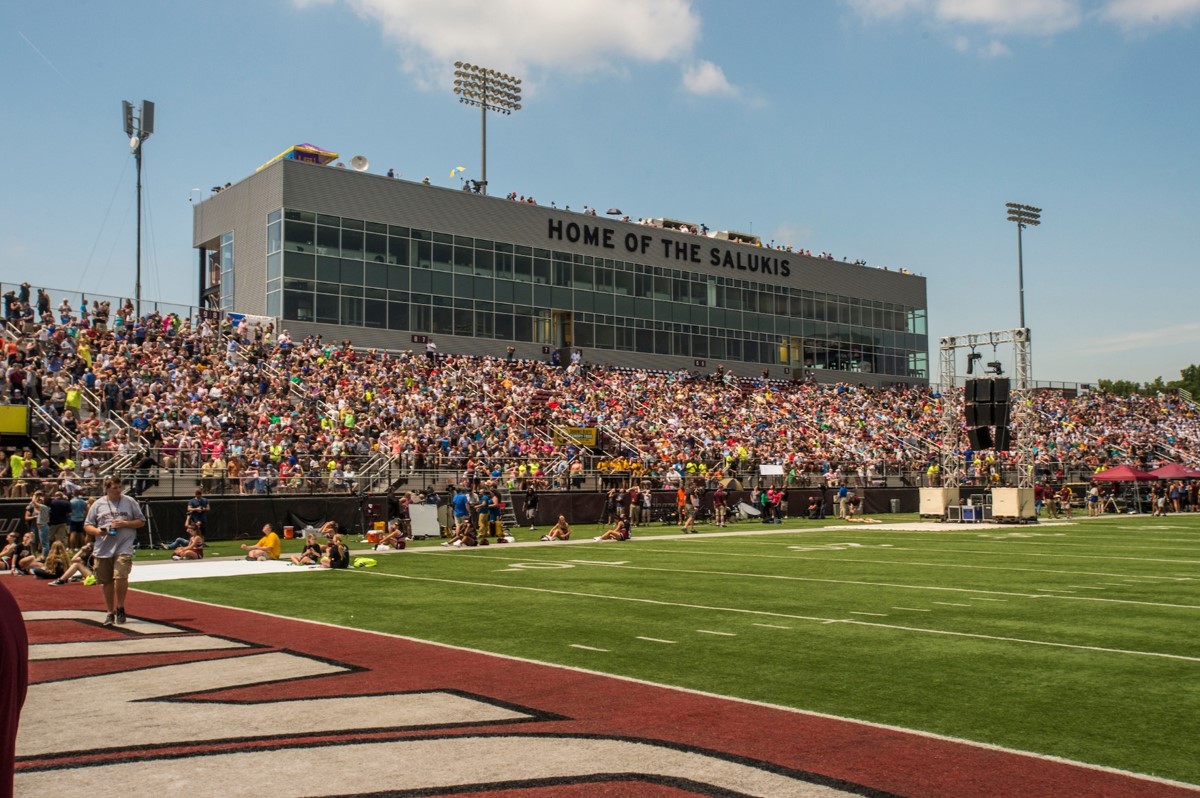 Visitors gather at Saluki Stadium for the August, 21, 2017, eclipse. (Photo by University Communications and Marketing)

CARBONDALE, ILL. - In 2014, when Southern Illinois University Carbondale began preparing for the August 21, 2017, total solar eclipse, there was no blueprint to guide its planning.

Four years later, the university’s eclipse events have been recognized with a grand gold award from the Council for Advancement and Support of Education. CASE is an international association of 3,700 colleges, universities and independent schools.

Bob Baer, co-chair of an eclipse steering committee made up of university and community representatives, said the committee didn’t know what to expect when it started planning.

“This was going to be the first total solar eclipse over the continental United States since 1979 and the first coast to coast in 99 years,” Baer said. “It was an incredible opportunity for outreach on a grand scale.”

“However, there were also concerns due to the possibility of large crowds overwhelming local infrastructure and transportation capacity,” Baer said. “The eclipse path created a 70-mile wide area of possible viewing locations throughout Southern Illinois with particular interest on the point of greatest duration near Carbondale. We knew we had to be prepared.”

Scott Ishman, Baer’s co-chair and the current interim dean of the university’s College of Science, said it eventually became clear that SIU and Carbondale would be a focal point for visitors and members of the scientific community on eclipse day – which also happened to be the first day of classes.

“Our goal as we planned was to use the eclipse as a platform to highlight SIU and its educational mission,” Ishman said. “At the same time we wanted to provide plenty of opportunities for people of all ages and interests, from scientists and amateur astronomers to school groups, families and our own students.”

Among the events that took place on campus over several days were a science and technology expo, a comic con, a live broadcast of Planetary Radio airing on PBS stations, and a range of activities at Saluki Stadium, highlighted by the eclipse itself.

Millions of people connected with SIU during the eclipse. NASA established a broadcast set outside of Saluki Stadium to share the event with an international audience via live streaming video. On the day of the eclipse, more than 30,000 people were on campus, including more than 250 journalists from around the world

“There were more than 150 people involved in planning and managing SIU eclipse events and more than 1,500 from the campus and community who contributed to our success,” Baer said. “It was truly a team effort.”

That effort was recognized last week with a CASE grand gold award for multi-day special events. CASE’s annual “Circle of Excellence” awards program honors outstanding work in advancement services, alumni relations, communications, fundraising and marketing at educational institutions. Winners are selected based on overall quality, innovation, use of resources and the impact on the institution or its external and internal communities.

This year, CASE received more than 3,200 entries in nearly 100 awards categories. Judges – who who are peers from CASE-member institutions – may award bronze, silver and gold awards and have the option of honoring exceptional entries with grand gold awards. SIU was one of 13 institutions earning a grand gold this year.

Other institutions winning awards in the special events categories this year include Auburn, Carnegie Mellon, Clemson and Duke universities, the University of Miami and the University of Southern California. Another Illinois institution, MacMurray College in Jacksonville, was also recognized.

Here’s what the judges said about SIU’s entry: “Very creative events! A good incorporation of using a natural planetary wonder to advance the mission of the university. Good planning …, excellent use of resources, and a great way to include the surrounding community and not just the campus community. Very well done, and very innovative.”

SIU Chancellor Carlo Montemagno, who was in his first week on campus when the eclipse took place, said he was impressed by the teamwork he witnessed.

“I suspect that the steering committee had doubts along the way, but they made it happen with perseverance, creativity and collaboration,” he said. “It told me that together, we can accomplish anything as a university. Congratulations to everyone involved.”

SIU and Carbondale are also on the path for a total solar eclipse April 8, 2024, earning the area the title of “Eclipse Crossroads of America” and providing a unique opportunity to observe and study both eclipses from the same location.

“We started the countdown to 2024 on the eclipse website as soon as the 2017 eclipse was over,” Baer said. “But we’re taking a year or two off from planning before we start it all over again. We went into 2017 with no existing model to work from. This time around, we have the model and a great deal of experience to build on.”

SIU Carbondale earned a grand gold award from the Council for Advancement and Support of Education for its work involving the Aug. 21, 2017, total solar eclipse that brought more than 30,000 people to campus, including more than 250 journalists from around the world. SIU was one of only 13 institutions to earn a grand gold award this year.