Chancellor Carlo Montemagno will host a recognition ceremony honoring the recipients of the Faculty and Staff Excellence Awards at 3 p.m., Thursday, April 26, in the University Museum Auditorium. Refreshments in the museum’s north gallery will be available after the program.

“The winners exemplify what makes SIU great,” said Chancellor Carlo Montemagno. “They are committed to our students and campus and dedicated to outstanding teaching, research and service. I'm grateful for the many ways in which they contribute to our mission as members of the SIU community.”

The Scholar Excellence Award “recognizes and promotes outstanding research and creative endeavors,” and is given only to those “who have made outstanding contributions to their discipline” and who are “widely recognized for their achievements by other scholars in the field.”

Ge, who joined the Department of Chemistry and Biochemistry as an assistant professor in fall 2003, is one “of the world’s leading scholars in theoretical studies of heterogeneous catalysis, surface science and materials science.”

Ge, who became a professor in 2010, is a three-degree graduate of Tianjin University in China, earning his bachelor’s, master and doctorate degrees all in chemical engineering.

Ge will receive the permanent title of Distinguished Scholar.

Mellinger, Department of Surgery, School of Medicine, Springfield, is an excellent educator within SIU as well as internationally in his field. His work includes innovative breakthroughs in surgical fields, development of a national curriculum, and expanding his education commitment to developing countries. Mellinger, the J. Roland Folse, MD Endowed Chair in Surgery, has been with the School of Medicine since 2010. He is professor and chair of general surgery and the general surgery residency program director. Among his numerous awards, Mellinger was the J. Kevin Dorsey Outstanding Educator at the SIU School of Medicine in 2016.

Dr. Jerry Kruse, dean and provost at the School of Medicine, nominated Mellinger and notes he pioneered a curriculum called “Fundamentals of Endoscopic Surgery” (FES). The curriculum is so well-regarded in the surgical field it is now mandated that all graduating seniors in the United States complete it in order to be eligible for their board examinations in surgery. Kruse notes Mellinger has also researched the impact of duty hour restrictions, resident performance, problem-oriented learning, and mentoring.

Mellinger led a surgical training effort in Nairobi, Africa through the Pan African Academy of Christian Surgeons, and the organization is now training multiple surgical specialties. He has given more than 100 national or international presentations and co-authored more than 80 scientific articles and more than 20 book chapters, many on topics of surgical education.

Mellinger earned his bachelor’s degree and received his MD from Case Western Reserve University. He completed his residency in general surgery at Blodgett/St. Mary’s Hospital in Grand Rapids, Mich. He served on active duty in the U.S. Air Force and before coming to SIU had academic appointments at Wright State University, Michigan State University and the Medical College of Georgia.

Mellinger will receive the permanent title of Distinguished Teacher.

Thomas, a clinical associate professor, heads the School of Law Domestic Violence Clinic. Thomas, the only teacher and attorney for the clinic is “an inspiring teacher who doesn’t just talk to her students about dedication to clients, she lives it,” Sheila Simon wrote in her nomination letter.

Thomas returned to college while raising a family and earned her bachelor’s degree in paralegal studies from SIU Carbondale and her law degree from the SIU School of Law. She worked as an assistant state’s attorney in Jackson County, prosecuting domestic battery cases for many years, and as an assistant appellate prosecutor for the Fifth District. She has been with the university since 2003 when she began as a lecturer in the paralegal studies program. She has been with the Domestic Violence Clinic since 2004.

The clinic includes a classroom component where Thomas’ topics include laws involving domestic violence and no contact orders. She invites guest speakers from a variety of domestic violence-related areas.

Thomas works with and supervises second- and third-year law students whose goal is helping domestic violence survivors “get safety and justice,” Simon wrote. She notes Thomas’ impact on students, who will “follow her lead and consistently work more hours than are expected of them.”

“Because of her work many survivors of domestic violence are safe,” Simon wrote. “But that impact is small compared to the exponential impact of the work of Gail’s students. Because of Gail’s inspirational teaching, there is a new group of lawyers every year who know how to do the work, how to achieve the high standards that we should all set for ourselves, and why.”

Thomas will receive the permanent title of Distinguished Teacher.

The Early Career Faculty Award recognizes faculty within their first five years at SIU Carbondale for “significant contributions throughout the year” to their discipline or the university community. The award recognizes excellence in scholarship, teaching and other professional activities.

Ford, who came to SIU in 2015 as an assistant professor in the Department of Geography and Environmental Resources, already has established “an impressive record of excellence” in research, teaching and service, said Justin Schoof, professor and department chair.

He has attracted four-externally funded research grants, including a highly competitive NASA ROSES grant and two from the NOAA MAPP program. Ford also has received internal funds from the Center for Undergraduate Research and Creative Activities to support undergraduate research.

“This level of grantsmanship is matched by a very small percentage of faculty at any academic level. It is extraordinary for a third-year assistant professor,” Schoof wrote.

About two-thirds of Ford’s 30 authored or co-authored papers published or in press have come while at SIU, including in high-quality journals “Bulletin of the American Meteorological Society,” “Geophysical Research Letters,” and “Scientific Reports.” Schoof notes the publication record also includes student collaboration. Ford has also given invited presentations at two major conferences.

Schoof notes teaching is also a strength for Ford. His primary teaching responsibility has been a large undergraduate core curriculum course “Weather, Climate and Society,” which regularly enrolls several hundred students and requires supervision of multiple graduate assistants who provide lab instruction and grading assistance. The combination of strong research and teaching skills has made Ford a “natural mentor,” Schoof wrote.

Ford earned his bachelor’s degree in geography from Illinois State University, and his master’s and doctorate degree, both in geography, from Texas A&M University.

The Staff Excellence Award recognizes an Administrative/Professional or Civil Service staff member for “significant contributions” to further the university’s mission. That includes demonstrating excellence in overall work performance, helping to improve students’ experiences, and serving as a positive role model for faculty, staff and students.

Cole, the greenhouse director and facilities operational manager for the Plant Biology Greenhouse and Conservatory in the Department of Plant Biology since 1993, is responsible for the well-being, care and development of a diverse collection more than 1,000 plant species.

Cole also provides live plant materials for labs and workshops, and is responsible for the plants at all university events and commencements. He also conducts greenhouse tours for students who are a variety of ages, along with local and regional community groups.

“Over the past 12 years I came to admire and appreciate Rich’s magic with plants,” said Matt Geisler, an associate professor in plant biology wrote in his nomination letter. “I know this isn’t actually magic, but comes from Rich’s strong work ethics, experience and dedication to his job.”

Geissler notes several examples of Cole’s efforts and dedication to the greenhouse maintenance.

In May 2009, Cole worked to rescue the university’s century-old living collection of world-collect plant specimens in the aftermath of the “Super Derecho” that left a large portion of the region without power for several days.

In December 2013, while an ice storm cancelled classes, Cole rushed in to check on plants and contacted Plant and Service Operations to provide portable heat for the facility and plants. Geissler said he returned days later and that a large propane tank was pumping heated air to sustain the plants. Cole looked tired, but smiled because his plants were alive, Geissler wrote.

Cole’s work and plants were also involved in support of the Traveling Vietnam Wall in September 2014 and the Total Solar Eclipse event at Saluki Stadium on Aug. 21, 2017.

Spann, assistant director of student involvement in the Office of Student Engagement, is committed to student success and dedicated to the university’s growth, profile and creativity, Vamsi Manne, associate director for programs in the Student Center wrote.

After working as a graduate assistant in University Programming, Spann was a campus programs manager at SIU Edwardsville from August 2009 to October 2011 before returning to SIU Carbondale to be coordinator of student programs. In 2014, Spann became director of student relations for the SIU Alumni Association and then moved to her present job in February 2017.

Spann has had a “tremendous impact, in her short tenure on campus and even shorter tenure in our office,” Manne wrote. That commitment includes Student Programming Council bringing dynamic speakers to campus, such as Cornell West, and concerts, including Capital Cities. Spann has been the adviser for student events including the “Up ‘Til Dawn” program, where they raise money for St. Jude’s Children’s Research Hospital.

Spann took on the task of assembling 800 volunteers for the August 2017 Eclipse event shortly after joining the student engagement office, including conducting numerous training sessions.

She helped open the “Registered Student Organization Suite Space,” and was instrumental in creating the curriculum and assisting with recruiting and selecting students for the new “Emerging Salukis” leadership program to help first-year students gain leadership skills.

Spann is a two-degree graduate of SIU Carbondale with a bachelor’s degree in marketing and a Master of Business Administration degree. She also has a certificate in international business from Grenoble Ecole de Management in Grenoble, France. 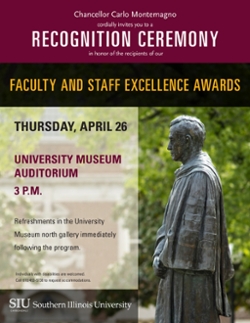 Honoring the contributions of exceptional faculty and staff at SIU Carbondale and the School of Medicine in Springfield.

Refreshments in the museum’s north gallery will be available after the program.