CARBONDALE, Ill. – Carl Hulse, the chief Washington correspondent for the New York Times, will visit SIU Carbondale later this month and discuss the present state of politics in the nation’s capital.

Considered one of the nation’s leading authorities on congressional issues, Hulse will present “Washington Politics in the Age of Trump” on April 23. The lecture is at 6 p.m. in the SIU School of Law’s Hiram H. Lesar Auditorium.

The event, sponsored by the Paul Simon Public Policy Institute, is free and open to the public.

Reporters, photographers and news crews are welcome to cover the lecture. To arrange for interviews or for more information on the event, contact Cary Day, Paul Simon Public Policy Institute marketing and communications coordinator, at 618/453-4008 or cbryant7@siu.edu.

Will provide insight on congressional issues

During his visit at SIU, Hulse will meet with journalism students and Simon Institute ambassadors.

Has been with New York Times for more than 30 years

Hulse has been in his present position since 2016. He is managing editor of First Draft, a daily political newsletter within NYTimes.com. He is also author of “On Washington,” a regular and widely read New York Times column chronicling developments in the nation's capital from the perspective of a longtime expert in politics and policy.

Hulse was previously Washington editor for The Times, directing all facets of Washington coverage of the White House and executive branch, Congress, the courts and the Pentagon from 2011 to 2014.

Grew up in Illinois

Hulse, who is from Ottawa, has a “deep understanding” of Illinois, John Shaw, institute director, said.

After graduating from Illinois State University, Hulse began his full-time journalism career at the LaSalle-Peru News-Tribune in January 1977.

Hulse also worked for the Kankakee Daily-Journal and the Fort Lauderdale Sun-Sentinel prior to becoming a correspondent and later Washington bureau chief for a regional group of community papers then owned by the New York Times in 1986. Hulse was appointed the newspaper’s night editor in 2001 and went to Capitol Hill a year later.

Washington Politics in the Age of Trump 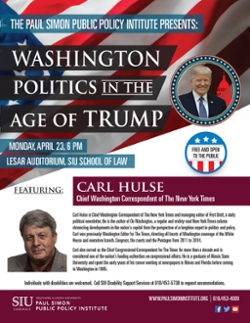