Vinicky will discuss “Contemporary Journalism” at 7 p.m., Thursday, April 12, in Lawson Hall, Room 101. The lecture is free and open to the public.

“Amanda understands the necessity for journalists to have a multimedia skill set and she’s a great example of a young journalist who has already built a significant reputation in the field,” Deborah Tudor, interim dean of the College of Mass Communication and Media Arts, said. “She’s a great role model for our students.”

Has covered Illinois state politics for more than a decade

The Springfield Business Journal recognized her as one of its “40 under 40” outstanding young professionals in Springfield in 2016.

H.D. Motyl, interim chair of the Department of Radio, Television, and Digital Media, said Greg Petrowich, WSIU executive director, watched Vinicky at work in Springfield earlier this year and was impressed with her simultaneous use of numerous media platforms.

“Besides typing notes, she was tweeting, hitting up Facebook and still staying on top of the address,” Motyl said. “I thought she would be a great person for our students to meet and learn more on how she works.

“She’s young, a very active journalist in the state, and she’s hip to social media and how to use it,” Motyl said.

Will meet with Marmaduke scholars while on campus

Vinicky will also have lunch with present and future Marmaduke scholars while she is at SIU. The scholars include:

The lecture honors the late Virginia “The Duchess” Marmaduke, a Southern Illinois native and groundbreaking Chicago journalist. A native of Carbondale who spent much of her later life in Pinckneyville, Marmaduke died in November 2001 at age 93. 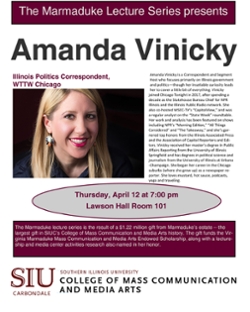