CARBONDALE, Ill. — John Shaw, the director of Southern Illinois University Carbondale’s Paul Simon Public Policy Institute, will discuss the perils and possibilities of resurrecting the past in a lecture and discussion later this month.

Shaw will present “Resurrecting the Past” at noon, April 18, in the Communication Building, Room 1032. Hosted by the School of Journalism, the Global Media Research Center and the Simon Institute, the event is free and open the public.

“Our journalism students are perfecting their skills in deep research, interviewing, and constructing the truth from the evidence they gather,” Deborah Tudor, interim dean in the College of Mass Communication and Media Arts, said. “Mr. Shaw’s experiences as a historian and a journalist will provide valuable insights to help them expand these skills.”

“Daily reporting and historical writing pose very different challenges and require different skills,” Shaw said. “But the journalist and the historian are both detectives who are trying to understand what really happened. And both are storytellers, trying to persuade their readers to take a journey with them — and stay on the journey until the destination has been reached.”

Shaw will argue that while both journalists and historians start their research with a “theory of the case” they must be open to evidence that challenges and even overturns their preconceptions.

“I think you have to allow yourself to be surprised and to change your mind. It’s also important to be open to finding linkages and connections that you never expected to find,” Shaw said.

Was a veteran congressional reporter prior to coming to SIU

Prior to becoming institute director in January, Shaw, a 26-year veteran congressional reporter with Market News International, and covered political and economic issues for the global news service.

He was a contributing writer for the monthly magazine The Washington Diplomat for the past 20 years. Shaw’s “People of World Influence” column profiled international affairs leaders including Colin Powell, Madeleine Albright, James Baker, Sam Nunn and Zbigniew Brzezinski.

Shaw is the author of five books including “Richard G. Lugar: Statesman of the Senate” and “JFK in the Senate: Pathway to the Presidency.” His latest book, “Rising Star, Setting Sun: Eisenhower, Kennedy and the Presidential Transition that Shaped America,” will be published by Pegasus Books this spring.

A native of Peoria, Shaw earned his bachelor’s degree in political science from Knox College in Galesburg. He earned his master’s degree in history from the University of New South Wales in Sydney, Australia and did graduate work in international relations at The Johns Hopkins University School of Advanced International Studies.

He has been a congressional analyst for media outlets including C-SPAN, ABC’s “20/20,” “The PBS Newshour,” and SkyNews Australia. 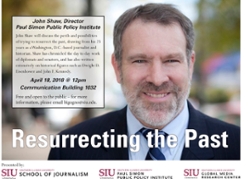