CARBONDALE, Ill. – Southern Illinois University Carbondale soon will roll out the red carpet for the premiere of a documentary capturing the excitement that gripped the region over last summer’s total eclipse.

“In the Shadow,” an hour-long look at the run-up to the Great American Eclipse in Southern Illinois on Aug. 21, 2017, was created by the professionals and students in SIU’s College of Mass Communication and Media Arts. It will premiere Saturday, March 24 at Shryock Auditorium on the SIU campus.

Of special note, Mat Kaplan, host and producer of the popular Planetary Radio show who acted as master of ceremonies during SIU’s eclipse program at Saluki Stadium, will be back on campus for the premiere. Plans currently call for Kaplan to arrive a day or two before the premiere to give guest lectures and host other educational events, officials said.

The gala event will feature a red-carpet walk at 5:30 p.m., with participants wearing their best “cosmic” attire, said Vanessa Sneed, director of university events and protocol. They also will be encouraged to tell their best eclipse story for an on-site camera specially designated to collect those remembrances.

The Jenny Johnson Band will perform at 6 p.m. with the documentary screening at 6:30 p.m. The directors and other special guests, including Kaplan, Bob Baer, specialist in the Department of Physics who served as co-chair of the university’s eclipse steering committee, and Michelle Nichols, master educator with Chicago’s Adler Planetarium, will be on hand for a questions-and-answers event immediately following the show.

The festivities move outside at 8 p.m. with a star-gazing party and reception featuring hot chocolate or punch – depending on the weather – cookies and other snacks.

Film the result of collaboration between MCMA faculty, staff and students

Mark Stoffel, a specialist in the College of Mass Communications and Media Arts, spearheaded the effort to create the documentary, along with H.D. Motyl, interim chair of the Department of Radio, Television, and Digital Media and of the Department of Cinema and Photography.

“I liked the idea right away, but was a little nervous about the gigantic task ahead,” Stoffel said. “Howard Motyl came on board soon afterwards, which completely erased my worries, because we work well together.”

The pair started working on the project in February 2017, as the university was deep in the throes of planning for the massive event, which officials estimated would bring thousands of people to campus and the surrounding region.

Students, staff and faculty taped hundreds of hours of eclipse-related planning and interviews well in advance of the actual event, giving a viewers a behind-the-scenes look at the logistics and planning involved in those preparations.

Motyl said one of the first challenges they faced was settling on a concept to tell this major story, and planning video shoots for all the related events.

Another challenge lay in the sheer number of people they needed to help them.

“We had to find enough crew members, whether they were students, faculty or staff, to help us on eclipse day,” Motyl said. “And then make sure they knew what they were capturing.”

Stoffel said the team worried about managing the complexity of the project, which had many different aspects. Such attention to detail continued right up to the day of the eclipse.

The day of the eclipse, the filmmakers and their army of helpers fanned out to capture the sights, sounds and excitement of the event, along with the actual event itself.

Film is still a work in progress

Once the shooting was over and the event passed, they were faced with combing through hundreds of hours of video, which they needed to log and rate, Stoffel said.

“It all started back in late February 2017 and we are still tweaking the film and probably will be right up to the world premiere on March 24th,” he said.

After the premiere, plans call for the program to air on WSIU TV sometime in May. Motyl said they also plan to send it to a few film festivals and might possibly make it available on DVD or through streaming services. 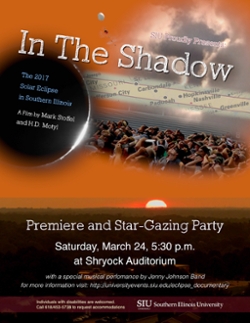