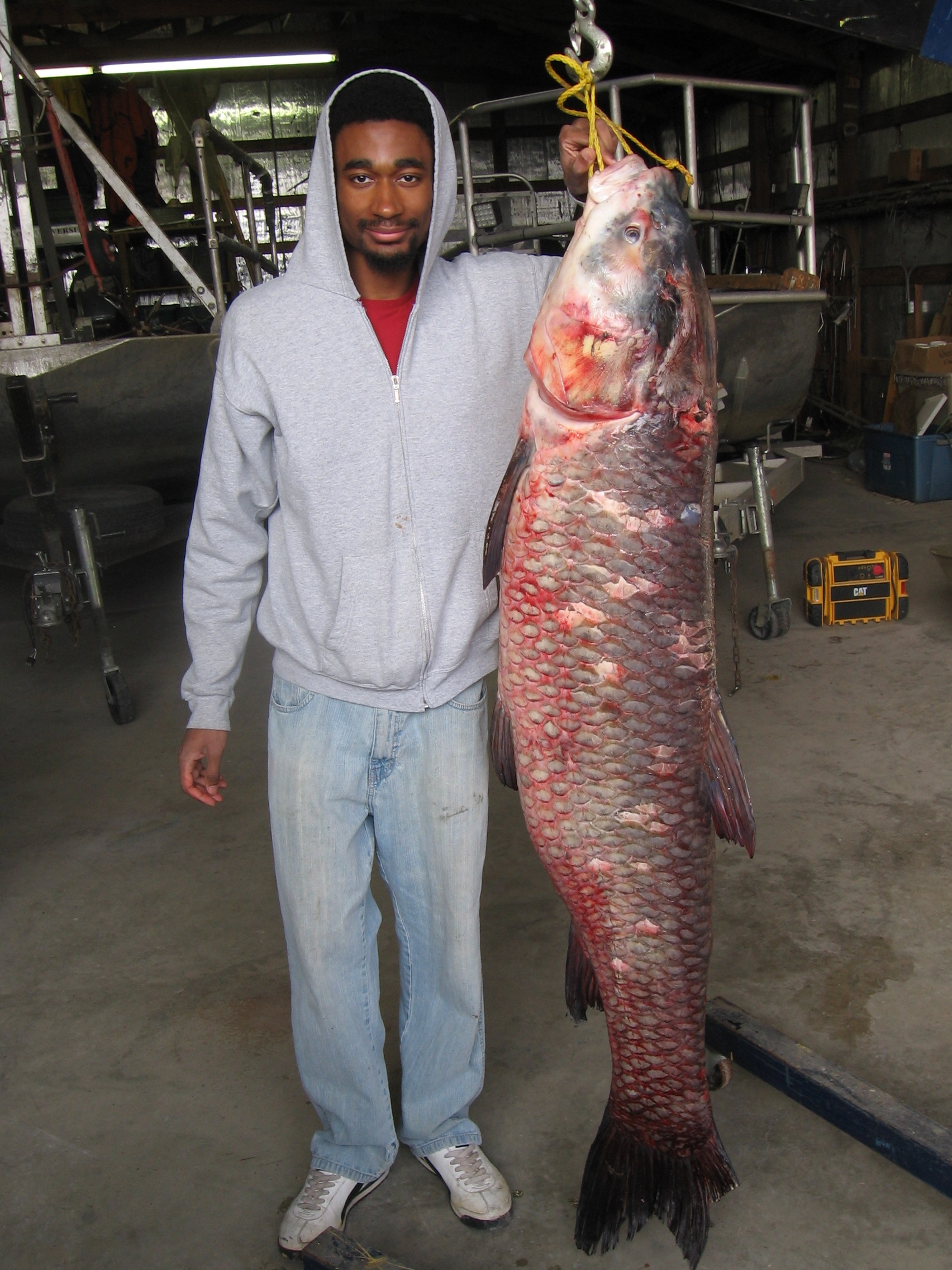 Southern Illinois University Carbondale graduate student Hudman Evans stands with what is believed to be the largest specimen of the invasive fish species black carp ever brought in for scientific analysis. The fish, a 115-pound female caught Thursday by commercial fishers on the Mississippi River near Cape Girardeau, Mo., could help unlock important secrets about its range, health and reproductive potential in that river and its larger tributaries. (Photo provided)

CARBONDALE, Ill. – Southern Illinois University Carbondale researchers this weekend received what is believed to be the largest specimen of the invasive fish species black carp ever brought in for scientific analysis.

The fish, a 115-pound female caught Thursday by commercial fishers on the Mississippi River near Cape Girardeau, Mo., could help unlock important secrets about its range, health and reproductive potential in that river and its larger tributaries, said Gregory Whitledge, associate professor of zoology at SIU.

SIU took possession of the fish Friday, after the fishers contacted the university. SIU manages a program funded by the Illinois Department of Natural Resources that pays commercial fishers for black carp that they catch and turn over to the university for scientific research.

During the weekend, researchers, including graduate student Hudman Evans, who is writing his master’s thesis in zoology on the invasive black carp issue, removed key organs and tissue samples that will tell the scientists much about the individual and its population. SIU also cooperates with the U.S. Geological Survey and IDNR on the research.

Evans said he became interested in fisheries as a middle school student and became interested in black carp after searching for graduate school opportunities. So far, his research has included capturing specimens and examining their diet in order to determine if they are eating the same prey as native fish species.

“This specimen will contribute diet analysis data to my project and also shed light on how black carp diets change as they get older and grow to bigger sizes,” he said.

Black carp initially were brought to the United States from their native China as a potential means of controlling parasite-carrying snails that were damaging aquaculture fish in the southern states. At some point, however, some of them escaped – possibly during flooding events – and made their way to the Mississippi River.

The first wild black carp were caught in the river during the early 2000’s. But during the last five years, commercial fishers increasingly have reported catching them in nets along with the game fish they are seeking. It’s a worrying trend Whitledge said, and one that SIU is on the vanguard of investigating.

“We have several projects going with the black carp, as well as Asian carp, another invasive species,” Whitledge said. “We hope this fish will tell us more about how black carp might impact native species, how big the potential population is, their range and how fast they are expanding.”

Typically, only commercial fishing outfits catch the fish, as its location and feeding habits lend it more to those practices than the typical rod-and-reel angler. Whitledge said the enormous specimen is certainly the largest ever brought in for scientific research, and quite possibly the largest ever caught in the United States.

When he heard about the catch, Whitledge said he was excited.

“I wanted to get a look at it because it’s much bigger than anything we’ve seen so far,” he said. “I’m curious to find out all we can.  We knew they were capable of growing this big, but this is one that is large enough that it is still quite an event. “

SIU at the vanguard of invasive species research

SIU is playing a leading role in finding out more about the problems it and the Asian carp might cause. As such, the university has received about 150 specimens caught all up and down the Mississippi River during the last few years.

“We are sitting here in the heart of the range into which these fish are expanding,” Whitledge said, adding that he and others also are working with funding from U.S. Fish and Wildlife Service.

In particular, scientists are concerned about the invasive species impact on native mussels, a favorite food that also are listed as threatened or endangered. As a bottom-feeder, it also likely competes for food with popular game fish, such as catfish.

“So looking at their diets is important,” Whitledge said.

Looking at a range of factors to learn more

To determine the specimen’s age, researchers will closely examine the specimen’s otoliths, bony anatomical structures in its ear, which forms tree-like rings at certain intervals as it grows.  The oldest such specimen so far identified was 16 years old, but Whitledge said this specimen’s size indicates it may be older than that one.

“This is the largest individual so far, so one thing we’re trying to understand is how old they get and how that might impact the size of the potential population,” he said.

Scientists also will analyze the chemical composition of this fish’s otoliths using mass spectrometry methods to try to determine where the fish spent most of its time. They also will examine the fish’s reproductive system and its overall health and growth rate, which might tell them how well the species is doing in the Mississippi River.

In China, the fish lives in larger rivers and tributaries, so the Mississippi River would seem an ideal habitat. While they can live in still waters such as ponds or lakes, the species requires flowing water to successfully hatch its eggs.