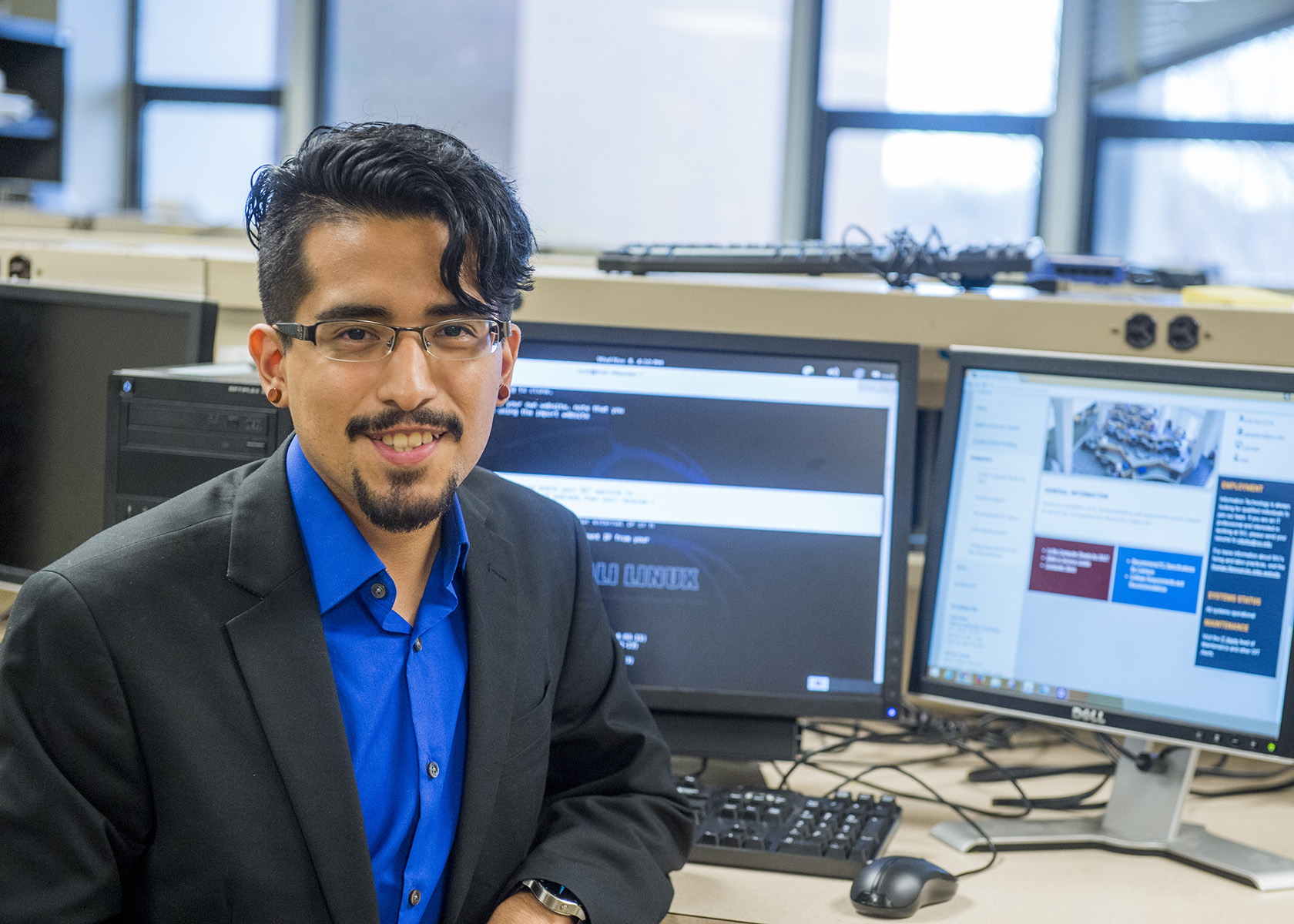 Student’s tenacity and drive were keys to success

With the help of several mentors at Southern Illinois University Carbondale, Aguirre also relied on his own drive and organizational skills that will enable the first-generation college student to graduate with honors and a degree in Information Systems Technologies (IST) later this week. A 2017 McNair Scholar who owns a 3.906 GPA, Aguirre also learned on his own to cope with dyslexia.

Aguirre plans to attend graduate school with a goal of becoming a university professor teaching information systems technology. He will be one of more than 860 candidates participating in commencement exercises at 2 p.m. Dec. 16 at the SIU Arena.

He links the start of his academic progress to Elk Grove High School. Aguirre said that until his junior year there he was mostly a C and D student, but was required to maintain a C average after joining high school’s technical theater crew. He made the B honor roll that year with “minimal” effort and with a little more effort as a senior, he was an A student.

Overcoming dyslexia on his own

While at Harper Community College, Aguirre said a required test to get accommodations for his dyslexia was about $300, which he could not afford. So he decided to “figure it out myself. Since then, I never tried to get help,” he said.

Tackling dyslexia without help was particularly challenging when he learned binary numbering systems, Aguirre said. But, he adapted by reviewing everything he read multiple times. That might have meant spending an extra hour or two to get an assignment done. But that is where Aguirre’s tenaciousness kicked in, said Belle Woodward, an associate professor in the School of Information Systems and Applied Technologies.

“It takes tenacity to stick to something in our program,” she said. “You have to respect the fact the he kept coming back to the problem. He has tenacity. I’m really proud of him.”

Aguirre transferred to SIU in fall 2015. Though he did not take advantage of the range of services offered by SIU’s Disability Support Services, he did find mentors “that helped guide me to my goals.”

Aguirre recently worked with Woodward on research that examined perceptions of privacy through different age groups, particularly where it involves technology. The study included focus groups and one-on-one interviews with 20 participants between 18 and 63 years old.

Aguirre presented the research at the annual McNair Summer Research Symposium in July and at two other conferences. He and Woodward are now working on getting their findings published in journals and at conferences.

“He worked tirelessly. He’s very focused and goal-oriented,” said Woodward, who was Aguirre’s mentor. “It was a joy to work with him. It’s important that we get students who work hard and who are dedicated.”

Focusing on research and connections on campus

Sam Chung, director of the School of Information Systems and Applied Technologies, said Aguirre was always eager to advance through his undergraduate research and IST coursework. He presented his research at several events, including the 26th annual national Ronald E. McNair Graduate and Recruitment Fair in Schaumburg in October and the SIU Speaker’s Forum in November.

“It can be challenging to make connections when you are a transfer student. Xavier managed to build a community that involved marching band, university honors and the McNair Program. I am very proud of him and what he has achieved,” she said.

Becoming a McNair Scholar was a “huge step” that provided great opportunities, particularly in pursuing graduate school where research is vital, Aguirre said.

“If I didn’t do research now I knew I would struggle more. I had the support system here to get me through,” he said.

Wanting to be involved and help others

Aguirre is “an enthusiastic and motivated student and eager to help his classmates,” Tom Imboden, an associate professor in information systems technologies said. “He helped me as a lab volunteer last year and will be a successful IT professional and represent SIU and IST well.”

Whether helping students with their work, participating in myriad student activities, including the Marching Salukis color guard and symphonic band, SIU SENSE (Students Embracing Nature, Sustainability and the Environment) or working as a resident assistant at Schneider Hall and later Wall & Grand, Aguirre said it was important to be involved. Helping others is among his reasons for pursuing graduate school to become a teacher rather than take a private-sector job with a six-figure income.

“I’ve always wanted to help people,” he said. “Whenever I’ve had the opportunity to help other students I’m willing to sit down and talk with them about the program, classes, and assignments,” he said. “I believe that teaching would be the best use of my time because I can actively help people when they don’t understand something and work with people.”

An early love of technology

Aguirre, who graduated from Elk Grove High School, said his interest in computers stems from childhood.

“Computers have always been something I was good at,” he said. “If I mess up, I can troubleshoot and figure out for myself. It was something I was able to teach myself rather than something that someone taught me.”

Marching Salukis and pleasing his mom

While at SIU, Aguirre was part of the Marching Salukis color guard for two years and played French horn with the symphonic band last year. Aguirre played saxophone and French horn in high school and the mellophone in the marching band.

His senior year, he tried out for the color guard, and did so again when transferring to SIU Carbondale. The Marching Saluki color guard is also where Aguirre met his girlfriend.

Aguirre said that his mother, Guadalupe, is “ecstatic” with his college achievements but is concerned that he places too much stress on himself at times.

“As long as I’m happy and doing well she couldn’t be happier,” he said.

The commencement ceremony for all SIU colleges, including the SIU School of Law, is set for 2 p.m. at the SIU Arena. As of Dec. 5, there were 864 candidates for degrees: 662 for bachelor’s degrees, 152 for master’s degrees, 27 for doctoral degrees, 12 for law degrees and 11 for associate degrees. Richard J. Mark, president of Ameren Illinois Companies, is the keynote speaker.