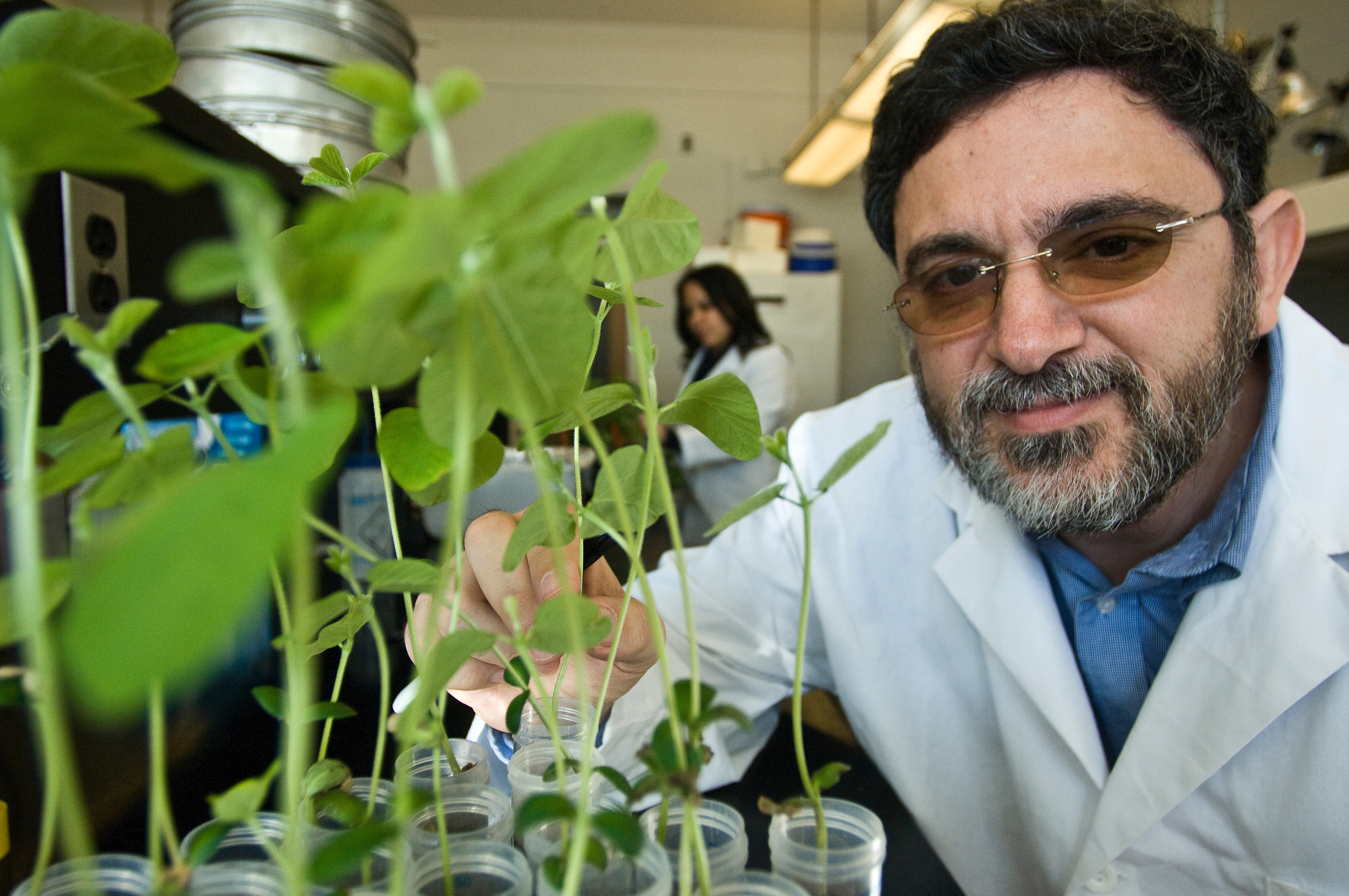 Ahmad Fakhoury, associate professor of plant pathology and fungal genetics at SIU, pioneered a new way to analyze soil for its ability to suppress a leading soybean disease, Sudden Death Syndrome (SDS). His research appears in “Phytobiomes,” the transdisciplinary journal of The American Phytopathological Society. (Photo by Russell Bailey)

CARBONDALE, Ill. – A researcher from Southern Illinois University Carbondale is enlisting another tool in the ongoing battle against soybean Sudden Death Syndrome – the soil in which the plants grow.

Ahmad Fakhoury, associate professor of plant pathology and fungal genetics at SIU, published a new article in “Phytobiomes,” the transdisciplinary journal of The American Phytopathological Society, detailing his latest research into the ability of soil to suppress the soilborne fungal disease Sudden Death Syndrome (SDS) in soybeans. The article, “Unraveling Microbial and Edaphic Factors Affecting the Development of Sudden Death Syndrome in Soybean,” is available online.

“The occurrence of SDS in fields is dependent on physical and biological factors, and the suppressiveness of soils to disease is a long-known phenomenon,” he said. “Promoting and sustaining the soil’s natural suppressiveness to disease can be integral to the effective, sustainable management of soil borne pathogens.”

SDS is a devastating soybean disease capable of destroying an entire crop, depending on the soybean variety. Soybeans are a major crop in American agriculture, particularly in the Midwest. In Illinois, the annual crop is worth nearly $6 billion a year in direct sales alone.

The increased occurrence of SDS has led to increased study of its causes. Soil profiling is a major tool for research. Until now, researchers have focused on identifying the soil’s physical and chemical characteristics when SDS is present. Fakhoury and his team have found a new way to analyze soil to determine the incidence and severity of SDS. They profile the soil’s microbes as well as the physical and chemical properties.

In this study, researchers analyzed soil samples from 45 soybean fields in Illinois, Iowa and Minnesota. They collected samples from symptomatic patches in fields and from adjacent areas where SDS foliar symptoms did not develop. Fakhoury’s team compared microbial populations in the “healthy” and “diseased” soil to correlate the presence incidence and severity of SDS. They measured soil-related factors and used markers specific to bacteria, fungi, archaea, oomycetes and nematodes to help identify key taxonomic species likely associated with SDS development.

During the investigation, they generated 14,200,000 sequences, mapping them against the National Center for Biotechnology Information’s nucleotide database and comparing them using several bioinformatics tools.

This unique method of analysis found significant differences in the bacterial and fungal community structures between healthy and diseased areas of fields, suggesting the relative abundance of multiple microbial taxia in the soil as a key determinant in the incidence of SDS.

“The work presented in this article documents the first attempt to assess the importance of biological factors in determining the incidence of SDS in soybean using metagenomics tools,” Fakhoury said. “This is basically a first attempt at resolving the complexity of the biological interactions that affect the occurrence of the disease.”

Fakhoury said this approach and the research techniques employed are important to indicate the “health” of the soil and its ability to sustain the main fungal pathogen that causes SDS. The work also serves as a building block for other researchers seeking to characterize the fungal pathogen and study the biology of its interactions. He said his approach and techniques are applicable to the study of other soil borne pathogens and diseases as well.

“The emerging tools and techniques we used permit the differentiation of complex microbial interactions,” Fakhoury said. “This will ultimately allow us to devise and adopt more efficient and sustainable strategies to manage SDS and other diseases that are detrimental to agricultural production.”

Information for this article is from www.phytobiomesjournal.org.