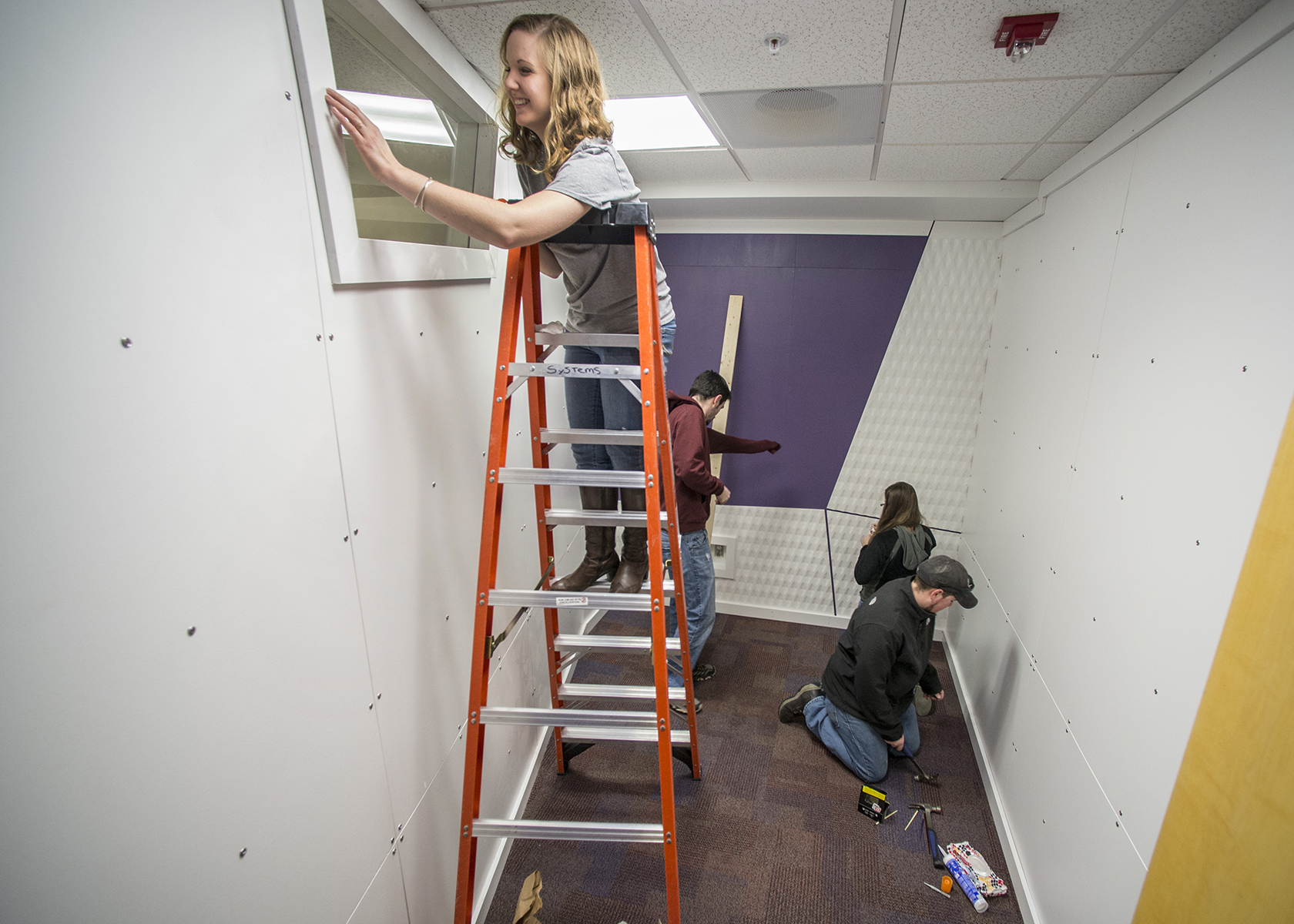 Finishing up – Four students in the School of Architecture recently helped put the finishing touches on the 'Lactation Room' in Morris Library. Seniors, from left, Zoey Koester (on ladder), Andrew Estabrook, Shelby Orr and Damian Smith, are the among six students who worked for more than a year on the independent design build study project.  (Photo by Russell Bailey)

Nestled in a third-floor area of Morris Library is a sanctuary for mothers who want privacy when needing to pump breastmilk or nurse their infants.

Six seniors from the College of Applied Sciences and Arts worked for more than a year on an independent study project to develop the “Lactation Room.” Project funds for the 8-foot by 13-foot room, which features sound-absorbing acoustic panels, came from the university’s Green Fund initiative. The cost is estimated at $20,000.

The room will be formally christened with a ribbon cutting at noon on Monday, April 3. Representatives from all the units that participated in the project, as well as SIU's Green Fund Committee and Sustainability team, will attend.

Carol LePere, staff architect with the university’s Plant and Services Operations (PSO), said the design-build project was a team effort from the start – a project involving the School of Architecture, Morris Library personnel, the university’s Non-Traditional Student Services, and PSO, which includes physical plant engineering services (PPES) and construction management.

The students learned how to meet and discuss plans with their clients, the library staff and PPES to understand project needs, code issues and the quality control expected for an existing public facility, LePere said. Once construction began the students and School of Architecture faculty worked closely with physical plant construction crews for oversight and assistance as needed. Electrical work was handled by physical plant electricians, she said.

Schwartz said students helped build much of the room and coordinated with contractors and ordered materials. Some of the project was built off-site and then brought to the library.

“They get the benefit of seeing something go from being on paper to something being real,” Morthland said. “They build models that are smaller in a studio environment, but to actually build in a physical space and see it come together is exciting.”

The room is near a family study room that features computers for parents to use while studying as well as toys to keep young children occupied. A children’s book section is nearby and a restroom with a diaper changing station is also on the third floor.

“We checked every floor for a possible location and this seemed to make the most sense for a number of reasons,” Susan Tulis, associate dean with Library Affairs, said.

“Having this room in the library will be very beneficial for our students. We’ve already had students asking when it will open,” she said.

Zoey Koester, a senior in interior design from Springfield, said that meeting with the client, along with consultants and PSO personnel throughout the project, has been invaluable. She became more comfortable with talking with clients, and learned that even when “things don’t always go as you plan them to, most people are on your side.”

“Designers just have to be patient and remember to keep an open mind and open conversation with their clients,” Koester said.

“I thought the clients would see one design they loved and move ahead with it. But decisions take time. You have to hold on and ask the right questions to get the specific answers you want,” she said.

An advantage with design-build projects is that students can take their own work “and turn it into something that is real,” Schwartz said. “They understand all the work it takes to make those lines turn into a corner that has to be mitered. They learn that things aren’t perfect as they are on a computer and they are able to make the relationship between that and something that is real.”

Students “have been at the center” of the project from the beginning, Deborah Barnett, a lecturer in the Department of Workforce Education and Development, said. Starting with an initial needs assessment by undergraduate students in a spring 2014 community nutrition class, research showed a need for lactation space on campus, said Barnett, who at the time was the non-traditional student services coordinator. Based on those findings, Barnett approached Schwartz about the possibility of a lactation station.

While students involved in the initial research have graduated or are in graduate school, they “played an integral role in raising awareness of the need and they are excited to see their proposal coming to fruition.”

“SIU has a long history of providing support to help students with children succeed,” Barnett said. “The mother's room will be a great addition to existing campus resources like on-campus childcare, family housing, and a family study room.”

“This project leverages the campus as a learning laboratory concept. Students collaborated with faculty and staff across disciplines to create a real-world solution that will positively impact our campus for years to come, said Geory Kurtzhals, sustainability coordinator. “The lactation room project was a great fit for the Student Green Fund, as it exemplifies the social, environmental, and economic aspects of sustainability.”

The ribbon cutting also kicks of Earth Month, which will be celebrated throughout April.

“We couldn’t have done it without them,” Morthland said. “Plant and Service Operations went above and beyond to make this an experience that was good for everybody. We all worked together. They were awesome.”