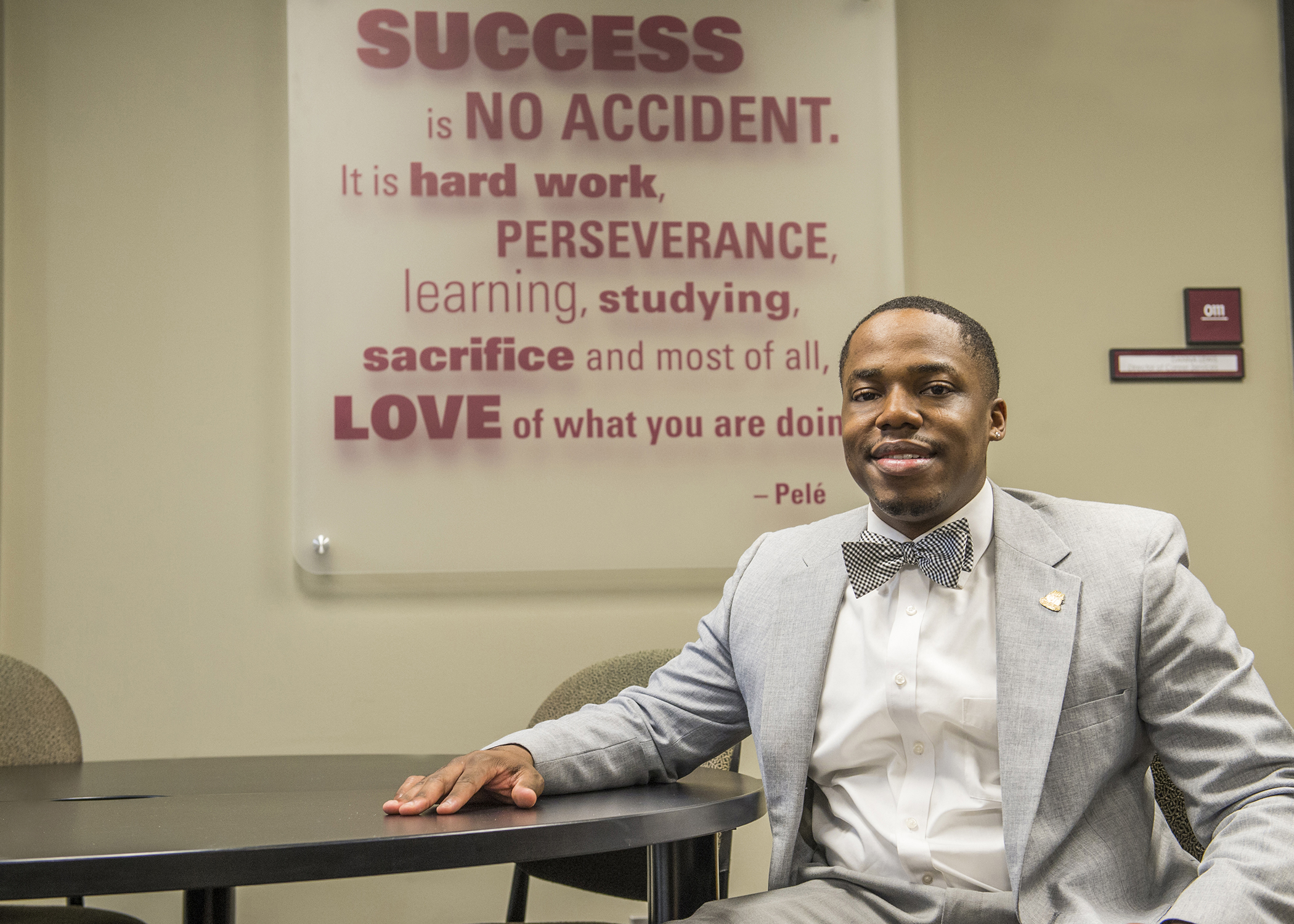 CARBONDALE, Ill. -- Desmon Walker came to Southern Illinois University Carbondale as a provisionally admitted student in the fall of 2012, the first in his family to attend college.

Fast forward to Saturday, Dec. 17. The Champaign native and son of Camillia Walker, will graduate with his bachelor’s degree in marketing. And when he receives his diploma, he’ll do so with a GPA exceeding 3.1, self-confidence and poise he didn’t think possible, and a co-curricular resume filled with diverse examples of his leadership, campus and community involvement, and real-world business experience.

After graduating from Centennial High School, Walker looked at his college options and chose SIU because it “was far enough from home to let me branch out, grow up and create a new path for myself but close enough to still go home for visits.”

When he arrived on campus, Walker quickly took advantage of the services and support available through the Center for Academic Success, now University College Exploratory Provisional Program. His hard work paid off as he attained a 4.0 GPA his first semester.

“Being a first-generation student, it was a little difficult to adapt at first but I was pro-active and took advantage of the many resources available here,” Walker said. “The UCOL 101 class was a major step toward success and through University College and the center, I was connected with peer mentors who I’m still close with and who have really helped me along the way. If there’s any advice I would give a freshman student, especially a minority student, it would be to find a good mentor. As an underclassman, I had people I looked up to and now as an upperclassman, I’m able to give advice and mentor younger students.”

Doing well academically wasn’t good enough for Walker though. He wanted to explore, get involved and experience life both on- and off-campus. He found plenty of opportunities at SIU, he said.

During his 4 1/2 years as a Saluki, Walker has been active in Undergraduate Student Government, serving as a senator for three years and vice president for one, and he has been a mentor and community volunteer with the Eurma C. Hayes Center Inc. “I Can Read” program. He’s been active in Alpha Phi Alpha fraternity, serving as a two-term president. He was also an organizer and workshop facilitator for the Alpha Phi Alpha Leadership Development Institute that brought more than 100 youths from across the Midwest to campus during the summer for a college learning and leadership experience. In addition, he assisted with a workshop at the Paul Simon Public Policy Institute’s Leadership Weekend, during which dozens of St. Louis metropolitan area young people are invited to SIU to work with and learn from campus leaders.

That’s not all. He has been a resident assistant at Mae Smith Hall, a tour guide for University Housing, and been involved with the Student Programming Council, where he served as concerts director during the spring 2016 semester, helping plan and market Springfest.

“I would definitely say that doing all of these things outside of the classroom has enabled me to apply what I’ve learned in class and also to practice leadership,” Walker said. “It’s really helped my personal development and my public speaking skills have improved, too. I considered myself very reserved before I came to college. Now, I’m more confident in my abilities. No matter where I am or who I’m with, whether it involves conversation or work to be done, I know I have something to offer. I can also read people better and better understand people’s attitudes. I think more broadly and long-term.”

Until recently, Walker had a job in the Student Center Bookstore and was able to secure an internship with Pfizer Inc., one of the world’s largest pharmaceutical companies. During the summers of 2014 and 2015, he worked in the company’s branch in Memphis, Tenn. He learned about accounting processes, financial tasks and project management, and was able to prepare a forensic accounting case study and present it to company leaders. Initially, he planned to become an accounting major, but despite thoroughly enjoying the internship experiences and learning much, the work also led him to change his major to marketing, a decision he’s pleased with.

He is currently seeking a job, and would love to work with Pfizer again but is open to relocating anywhere to secure a position where he can put his education and experience to use. His dreams revolve around entrepreneurship. He ponders the possibility of starting his own business -- perhaps a restaurant, an event planning business, or even a marketing or consulting company. His goals also include returning to school to complete his MBA. He’s interested in maintaining community involvement and politics so he says it’s likely in the future, he will work in the public sector, get involved in lobbying, or even run for office.

“Desmon is the kind of young man who you want your daughter to marry. He’s intelligent, determined to be successful, has a lot of business savvy and he doesn’t allow obstacles to keep him from striving towards his goals,” Nathan Stephens, of the Office of Inclusive Excellence, said.

Walker will celebrate his graduation by taking a “Meet and Teach” trip to Africa where he will lead workshops, teaching and mentoring less fortunate children. He always wanted to study abroad in Africa, and while that didn’t work out for him, he found another way to travel there to teach and learn.

“The best advice I was given is when things get hard, whether academically or personally, take the time to sit down and think about what Plan B would be. If that’s desirable, okay, but if it’s not, then do whatever it takes to make Plan A happen. That advice stuck with me. I followed through with Plan A and I’m getting my degree. Now, I’m following through with Plan B for a different area of my life to experience Africa.”

Walker was connected with this non-profit “Meet and Teach” organization opportunity through fellow SIU student Evan Brown and jumped at the chance. A group of seven volunteers will be leaving the United States Dec. 20 and traveling to Hout Bay, near Cape Town, South Africa. They will partner with the Harvest Youth Project to present hands-on workshops and Walker is quite excited about the opportunity. They will return to the U.S. Jan. 14, 2017.

“This will be a life-changing experience for me,” Walker said. “I look forward to bringing back what I learn on my journey to help others in need.”