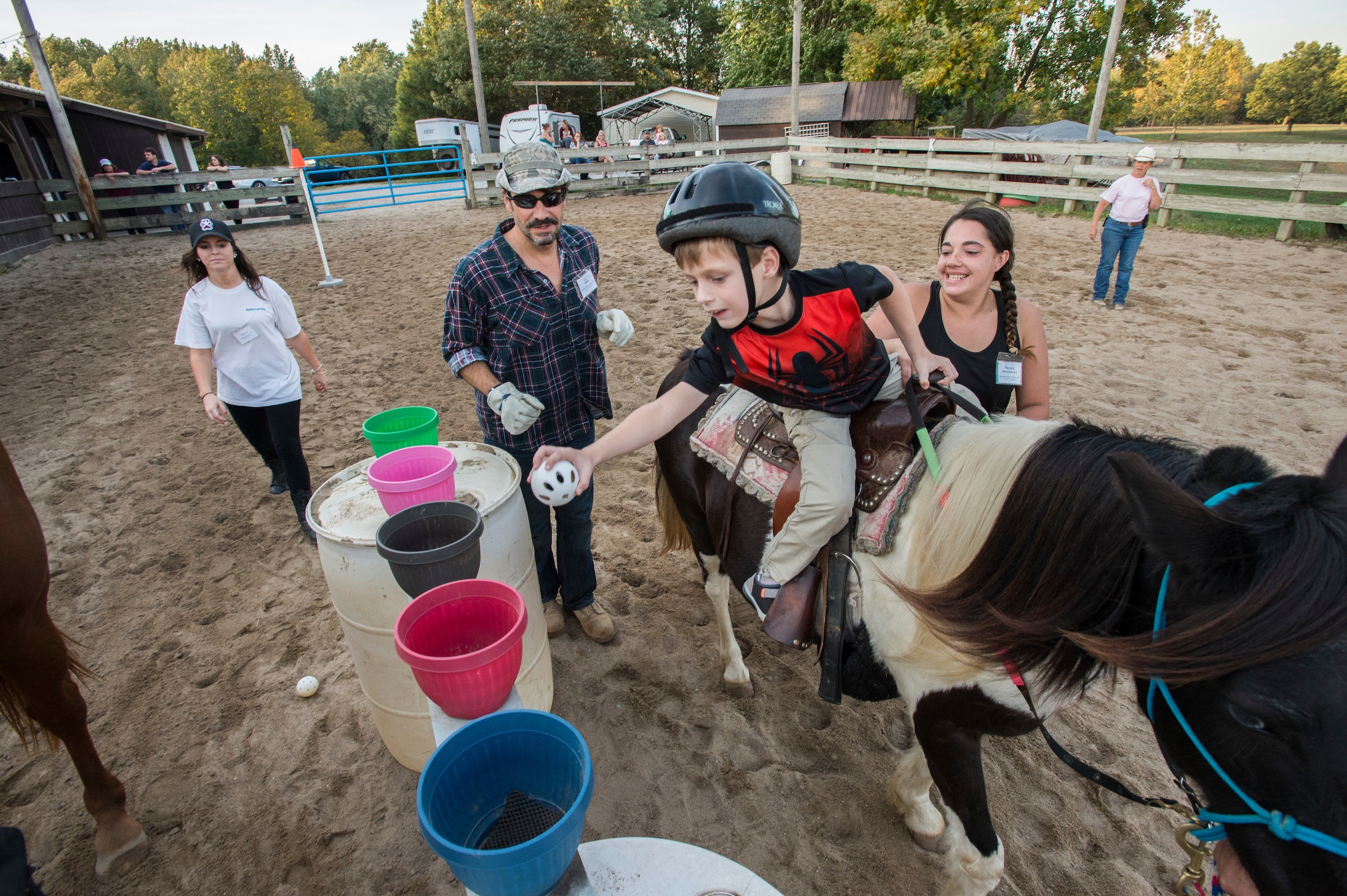 Equine Therapy -- Jacob Crites, 7, throws a ball into a bucket while participating in equine therapy at Giant City Stables. Helpers for the program, from left, include: Kayla Daugherity, a junior SIU social work major from Elk Grove Village; Dan Hill, a student at John A. Logan College; and Nicole Woodruff, a senior SIU animal science major from Granite City. At far right is Ramona Twellman, owner of the stable. (Photo by Russell Bailey)

CARBONDALE, Ill. -- Would Alex, Katie or Jacob be the first to ride a horse across the arena and throw a couple of balls into the assigned brightly colored buckets?

It was an intense but fun competition. Jacob smiled and pumped his fist in jubilation as he won the first round. Undeterred, Alex and Katie tried ever harder to assure their victories in subsequent rounds. Students from Southern Illinois University Carbondale offered encouragement and help. The young trio enjoyed other contests and activities during the next hour, all the while sitting tall in their saddles at the Giant City Stables.

About 50 SIU students are involved with Specialized Equine Services and Therapeutic Riding, a program that originated about 20 years ago at the stables and which was formalized as a non-profit organization in 2013. At that time, services were expanded to even more participants, requiring additional student volunteers to help.

Some of the students choose the program in order to complete required practicum hours for the university’s Recreation 303 and Recreation 404 classes, while others volunteer because they enjoying working with children and/or horses. More often than not, students keep coming long after their course obligations are fulfilled, according to Marjorie J. Malkin, an emeritus professor of health education and recreation who has returned to the university as a visiting professor.

The horseback riding program is a therapeutic tool that helps children and adults with a variety of physical, cognitive, psychological, emotional or social difficulties. The program has proven benefits for people with autism, Down syndrome, cerebral palsy, genetic disorders, brain injuries and numerous other conditions, as well as for cancer survivors and those with PTSD. When riding a horse, the body moves much like it does when a person walks; the horse’s slow, rhythmic motions stimulate riders’ bodies and work their muscles. According to those involved, the benefits are apparent physically, socially and emotionally.

Equine therapy is Katelyn “Katie” Lillig’s favorite among the various types of therapy she is involved with, as it is for her mom, Kimberly Cantwell of Carbondale. Katie, now 7, was diagnosed as autistic at the age of four.

“It’s something different and new and she really enjoys it,” Cantwell said. “It helps her, but to her, it feels like all fun. She likes the horses, going fast and the one-on-one attention from the college students. This is something she wants to do. The therapy is helping her posture and strengthening her core muscles and things like that but social language is one of her biggest challenges and it’s helping there, too. She’s learning to take and follow directions, communicate with the students, and give commands to the horses.

“There are a lot of little things built into the therapy that all add up to help the kids. When Katie is riding, they’ll have her stand up in the stirrups. That makes her stronger. And Ramona always has games set up so the kids aren’t just riding, they are doing secondary tasks like grabbing rings or throwing balls. It all works together to help them develop,” Cantwell said, referring to Ramona Twellman, owner of the stable and PATH certified riding instructor and International Society of Rider Biomechanics coach.

Jacob Crites is affected with mitochondrial disease and had a stroke at just 14 months of age. His mother, Crystal Crites, said her son has been through a lot in his seven years but is doing pretty well. Nevertheless, he struggles with muscle tone and balance as well as with speech. The equine therapy, which he has participated in for about a year, is helping with all of those issues, a little at a time. Jacob has also formed a special connection with some of the student volunteers, particularly the young men, and she appreciates the consistency of him being able to see those same volunteers each time.

Crystal said the students “seem to pick up on when to push Jacob and when to back off” and although her son can be a bit moody at times, they seem to know just what to do to bring out the best in Jacob.

“Jacob and some of the other kids are involved in other types of therapies too, but they don’t realize this is therapy. They just know they are having fun,” Crystal said. “It helps them to be more social with the other kids and SIU students and adults too. It’s good for them physically, socially and in other ways. ”

The program is successful for the participating children in large part due to the SIU student volunteers, according to Patricia Nardini, co-founder and president of Specialized Equine Services and Therapeutic Riding.

“It’s such an eye-opener,” Steve Riedinger, a senior therapeutic recreation major and president of SIU’s Student Recreation Society, said. The Crystal Lake student said he didn’t even realize before getting involved with equine therapy that such a thing existed, let alone its effectiveness.

“I’ve seen kids who were almost non-verbal begin to speak. It’s been amazing and incredible the leaps and bounds I’ve seen these kids make. It astonishes me every time,” Riedinger said. He tells of one little boy prone to meltdowns and self-inflicted injuries but after a few months of equine therapy, there was only one “mini-meltdown” during therapy sessions and family members said the positive effects were carrying over to the child’s home life as well.

That’s not a surprise to Malkin because during the therapy, children learn coping mechanisms such as counting, deep breathing and other techniques that help them better handle life. Through interaction with the SIU students and one another and during specific activities, the children learn, socialize and develop.

The success stories, large and small, are many, she said. Children who spend much of their time in wheelchairs have actually gotten up and walked to the horses.

Nardini tells of additional lives changed. A father reports that his autistic son is much more willing to go outside than before equine therapy. A little girl, born with her brain partially outside of her skull, began equine therapy and it helped with her muscle memory and tone. At the age of 12, she now participates in races using a walker. A young boy born with cerebral palsy, although non-verbal, is very intelligent and after equine therapy is able to walk with a little help from his mom, maneuver in a motorized wheelchair and attend school in a regular classroom.

“We’re bringing the classroom to the stable,” Malkin said. “This experience has even changed the career paths of some students.”

Although many of the students helping with the equine therapy are from SIU’s therapeutic recreation program, they come from all majors including social work, nursing and animal science.

Participants are accepted on an ongoing basis for the program, which operates spring, summer and fall due to weather considerations. The next eight-week session begins in March 2017. Volunteers and donations keep the cost of the program to a minimum for the parents and many pay on a sliding scale.