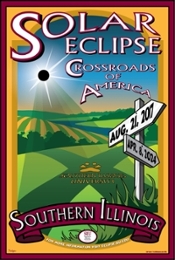 CARBONDALE, Ill. -- Just in time for the holidays, solar eclipse enthusiasts can again purchase the one and only official poster for the event coming to the area this August.

Southern Illinois University Carbondale’s Craft Shop recently received a new shipment of the posters, all of which previously sold out. This latest shipment of 200 can be purchased at the Craft Shop, located in the Student Center, or over the phone with a credit card for shipping.

“We went through that first shipment of 300 posters like water and we’d thought we were going to have enough for the holidays,” said Ron Dunkel, coordinator of the Craft Shop. “Turns out we had to order more for the holidays.”

Southern Illinois will be the site of the longest duration of the Aug. 21 total solar eclipse. SIU is gearing up to play a major role in the event, which will feature the first total solar eclipse over the mainland United States since 1979. As many as 50,000 sky watchers are expected in Carbondale in the days and hours leading up to the event.

Not only that, but a second such event is due on April 8, 2024. The intersection of the two eclipse path centerlines is just south of Carbondale near Cedar Lake. The region offers a unique opportunity to observe these two eclipses from the same ground-based spot.

The university is planning a variety of activities for the 2017 eclipse, including the Crossroads Art and Craft Fair, the Crossroads Astronomy, Science and Technology Expo, and educational programming provided by the Adler Planetarium of Chicago. NASA’s global webcast will originate from Saluki Stadium, and LSU researchers, with students from LSU and other Louisiana universities, will launch two balloons from the stadium. One will carry student-designed experiments while the other will provide video of the eclipse.

The main event, of course, will be eclipse viewing in Saluki Stadium. More information, including ticket prices, is available at eclipse.siu.edu.

Dunkel said sales of the poster are brisk, with some orders shipping as far away as Hawaii. The posters cost $12 at the Craft Shop, with a $4.99 shipping charge for out-of-the area purchases. Two pairs of solar safety glasses are included with each purchase. You can reach the Craft Shop at 618/453-3636.

“We are seeing family members who know they have family coming for the occasion buying them and having them shipped to those family members. It seems like more posters are being ordered from farther away than last time as word is getting out that this is the place to be for the eclipse,” Dunkel said.

The 12-inch by-18-inch color poster depicts a rolling, rural landscape under an eclipsed sun, with road signs indicating the dates for the two eclipse events set to impact the region next year and in 2024. It was designed by Tyler Nordgren, professor of physics and astronomy at the University of Redlands.