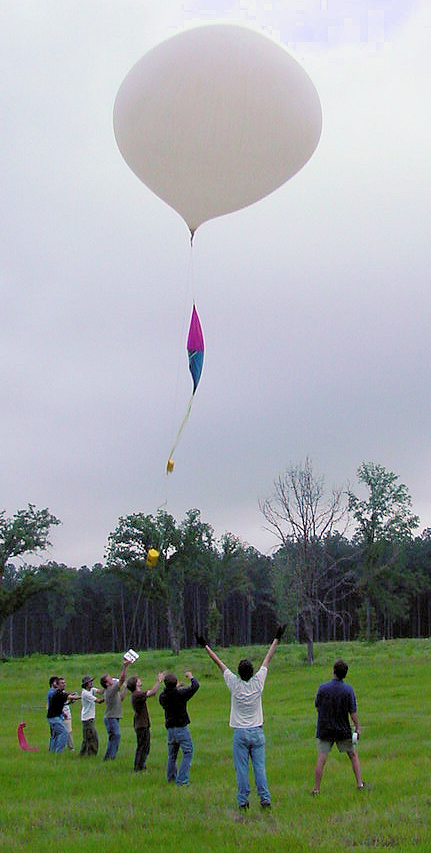 A team of students and researchers from Louisiana State University plans to launch two large weather balloons like the one shown here from Saluki Stadium in order to take real-time video and conduct scientific experiments during the total solar eclipse on Aug. 21, 2017. Scientific instruments and video equipment will be suspended from the balloon, as shown in this picture of a previous launch. (Photo provided)

CARBONDALE, Ill. -- A team from a southern university is the latest group planning to travel to Southern Illinois University Carbondale next summer for the total solar eclipse.

The team, made up of students and researchers from Louisiana State University and two to three other Louisiana institutions, plans to launch two large weather balloons from Saluki Stadium about 90 minutes or so before the eclipse totality, which is set for 1:21 p.m. on Aug. 21. The team will attempt to coordinate the expected climb rate of the balloons to coincide with the event, in order to capture live video and conduct student-driven experiments.

T. Gregory Guzik, director of the Louisiana Space Grant Consortium at LSU’s Department of Physics and Astronomy, said his students have conducted such balloon launches in the past to study a variety of phenomena, but never for an eclipse.

“The difference this time will be the precision of the launch, both from a particular site and within a margin of error of about 15 minutes or so,” Guzik said. “We want the balloons to be at about 90,000 feet when totality begins, and they typically ascend at about 1,000 feet per minute.”

Balloons at that height will assuredly be above any unfortunate cloud layer that day -- although weather patterns typically call for clear skies that time of year in Southern Illinois. The balloon equipped with a video camera payload will send back real-time images as the moon blots out the sun. The feed will be made available to the NASA television program, Edge, which also will be broadcasting from SIU that day.

Southern Illinois will be the site of the longest duration of the upcoming total solar eclipse. SIU is gearing up to play a major role in the event, which will feature the first total solar eclipse over the mainland United States since 1979. As many as 50,000 eclipse enthusiasts are expected in Carbondale in the days and hours leading up to the event.

Not only that, but a second such event is due in 2024. The intersection of the two eclipse path centerlines is just south of Carbondale near Cedar Lake. The region offers a unique opportunity to observe these two eclipses from the same ground-based spot.

The university is planning a variety of activities for the 2017 eclipse, including the Crossroads Art and Craft Fair, the Crossroads Astronomy, Science and Technology Expo, and educational programming provided by the Adler Planetarium of Chicago. The main event, of course, will be eclipse viewing in Saluki Stadium. More information, including ticket prices, is available at eclipse.siu.edu.

The second balloon the LSU team plans to launch will carry up to five scientific experiments currently being designed by students at other Louisiana institutions as part of a competition, Guzik said.

The exercise will help train students to think like scientists do in developing such payloads, as well as build presentation and leadership skills. The eclipse, he said, is an excellent opportunity to fire such imaginations and motivations.

“They are getting the opportunity to develop something with their own hands that will travel to the edge of space,” Guzik said. “Space is a good draw, and the scientific focus of the eclipse makes it even sweeter.”

The balloon launches in Carbondale that day will be among about 50 similar launches stretching all across the country as eclipse totality sweeps from northwest to southeast. Teams will launch balloons with video and experimental payloads all along that path as part of an effort led by the Montana Space Grant Consortium and funded through the NASA National Space Grant College and Fellowship Program, and the NASA Science Mission Directorate.

Guzik, whose work as a scientist focuses on cosmic radiation, said he has been involved with launching such high-altitude balloons for 20 years. Students have become more involved in the practice during the last 12 years, while newer, more affordable video and global positioning system equipment has made launching balloons to the edge of space even more commonplace than ever before. It’s not difficult to find examples of such projects on popular internet sites.

At 90,000 feet, the video camera will be able to see some 200 miles out toward the horizon. Guzik said it may be possible to see the moon’s shadow coming toward Carbondale at a distance, though the group will have little or no control over which way the camera is pointed at any given time.

“The video picture hopefully will become more stable once the balloon is above 50,000 feet or so, where the wind turbulence is less,” he said.

The video balloon will use a wireless serial link -- essentially a wireless Ethernet modem -- to transmit the data back down to the ground. Two ground stations, one on the roof of the Neckers science building and one top of the Saluki Stadium Club, will pick up the signal and pass it along.

During a test of the video system in September in New Mexico, Guzik said the team achieved good video data transmission from as far as about 40 miles line-of-sight. During the eclipse event, researchers expect the balloon to only be about 25 miles away.

“So we hope to have some very good video,” Guzik said.

After the event, and once the balloons reach about 100,000 feet, the teams will activate a terminate device which will send the equipment falling back to Earth before parachutes activate. Guzik said the team expects the equipment to land about 35 miles northeast of Carbondale, and chase vehicles with GPS equipment will be ready to track them down.

The LSU team’s involvement is only the latest development as SIU prepares for the event. The university also recently completed pouring a series of concrete pads at a spot near the University Farms in the countryside west of campus that will provide scientists as well as amateur astronomers with firm, level resting spots for their telescopes