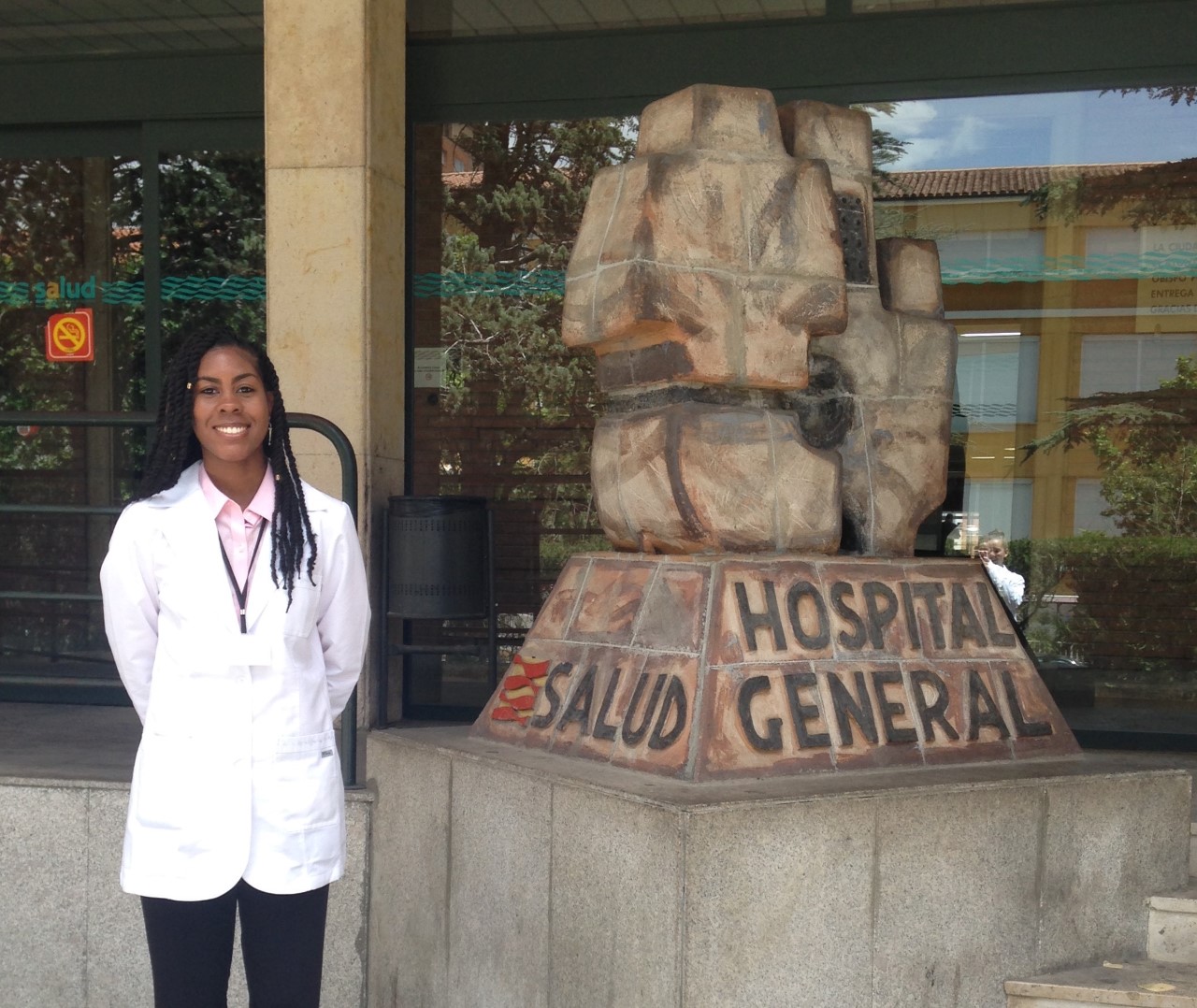 CARBONDALE, Ill. -- Although observing colonoscopies, tumor removals and other medical procedures may not sound like typical summer fun for most college students, getting the chance to shadow physicians -- in Spain, no less -- was a “dream come true” for Arishna Marshall.

Marshall, a senior exercise science/pre-medicine major at Southern Illinois University Carbondale, described her summer 2016 study-abroad medical immersion as “phenomenal.” The daughter of SIU alumna Taquana and Ricardo Marshall of Maywood, Arishna has been interested in the field of medicine ever since she was a little girl.

“It was always a field that greatly intrigued me and I wanted to help people,” she said.

A longtime athlete, Arishna grew up dancing and playing basketball, soccer, softball and tennis. She soon realized that working as a sports medicine physician would allow her to combine two of her passions into a rewarding career.

While continuing her education, she job-shadowed athletic trainers and physical therapists but she wanted something more medically intensive to enhance her experience and her resume. An Instagram ad caught her eye, and with the help of faculty and staff at SIU, she learned more about The Atlantis Project and decided the international learning excursion was just what she was looking for.

After submitting an application, letters of reference and participating in a virtual interview, she was selected as a program participant. Maggie Flynn, study abroad adviser for SIU, provided helpful information to prepare Marshall for the trip. Then, thanks to some financial assistance from family, friends, a GoFundMe fundraiser and even contributions from some SIU faculty and staff, Marshall was able to travel to Teruel, Spain, June 17 to July 10 for an international pre-medicine fellowship.

Following an orientation session in Madrid with other Atlantis Fellows, Marshall settled in and began job shadowing at the Hospital Obispo Polanco in Teruel, a city of just under 36,000 people in eastern Spain. For five hours a day, four days each week, she observed physicians during consultations, assessments, surgeries and doing everything else they do on a daily basis. Dr. Sergio Nijensohn showed her what cardiology is all about. Marshall later shadowed gynecologists, gastroenterologists and otolaryngologists.

A pregnancy ultrasound, treatment of heart conditions, endoscopy procedures, hysterectomies, the removal of a cervical lesion and an ear tumor, interventions to remedy incontinence issues -- Marshall saw it all and then some.

“I definitely got to see things I’ve never experienced before,” Marshall said. “It was really interesting.”

She observed how health care was practiced in another country, finding many similarities as well as many differences with what she’s seen in the United States. She was surprised to learn that in Spain, all health care is free and education is free until the age of 16, after which it is relatively inexpensive, even medical school. She said as a consequence, it seemed to her that there was less of a “class system” and less distinction between the members of the medical teams. Marshall said doctors and nurses worked together especially closely, communicating well to assist patients.

However, she also noted that since there is no insurance and no cost involved, it’s not uncommon for people to skip appointments. She believes American technology is perhaps more advanced overall, allowing some procedures to go more smoothly, but that in both countries, the health care professionals are caring, well-educated people who are doing their best for their patients.

Her education thus far at SIU prepared Marshall well for the pre-medicine fellowship, she said. The Physiology 301 lab, a cadaver lab she participated in her junior year, proved particularly helpful as she observed Spanish health care providers at work.

“I really knew what they were talking about. It was so interesting to see the technical aspects I had learned with diagrams and models applied to patients,” Marshall said. “This experience really solidified my decision to go into medicine.”

The trip was more than an up-close and intense immersion into medicine for Marshall. She was able to make new friends of different nationalities, network, and enjoy an incredible cultural learning experience, she said. She got a bit better acquainted with the members of the medical staff by volunteering to meet and talk with physicians to help them practice their English, even discovering a shared love of tennis with a doctor who was a native of Argentina.

There were excursions and group dinners as well. She found the people warm, welcoming and helpful, although she admits that a translation app on her telephone came in quite handy when communicating since her two years of high school Spanish weren’t sufficient for full conversations.

“This was a very worthwhile experience,” Marshall said. “I learned about medicine as well as the country and the people. I made connections with people from all over who share interests and I got different perspectives on things. I now have friends and colleagues within the states and across the borders who I can contact for advice, information and networking. It was definitely a once-in-a-lifetime experience.”