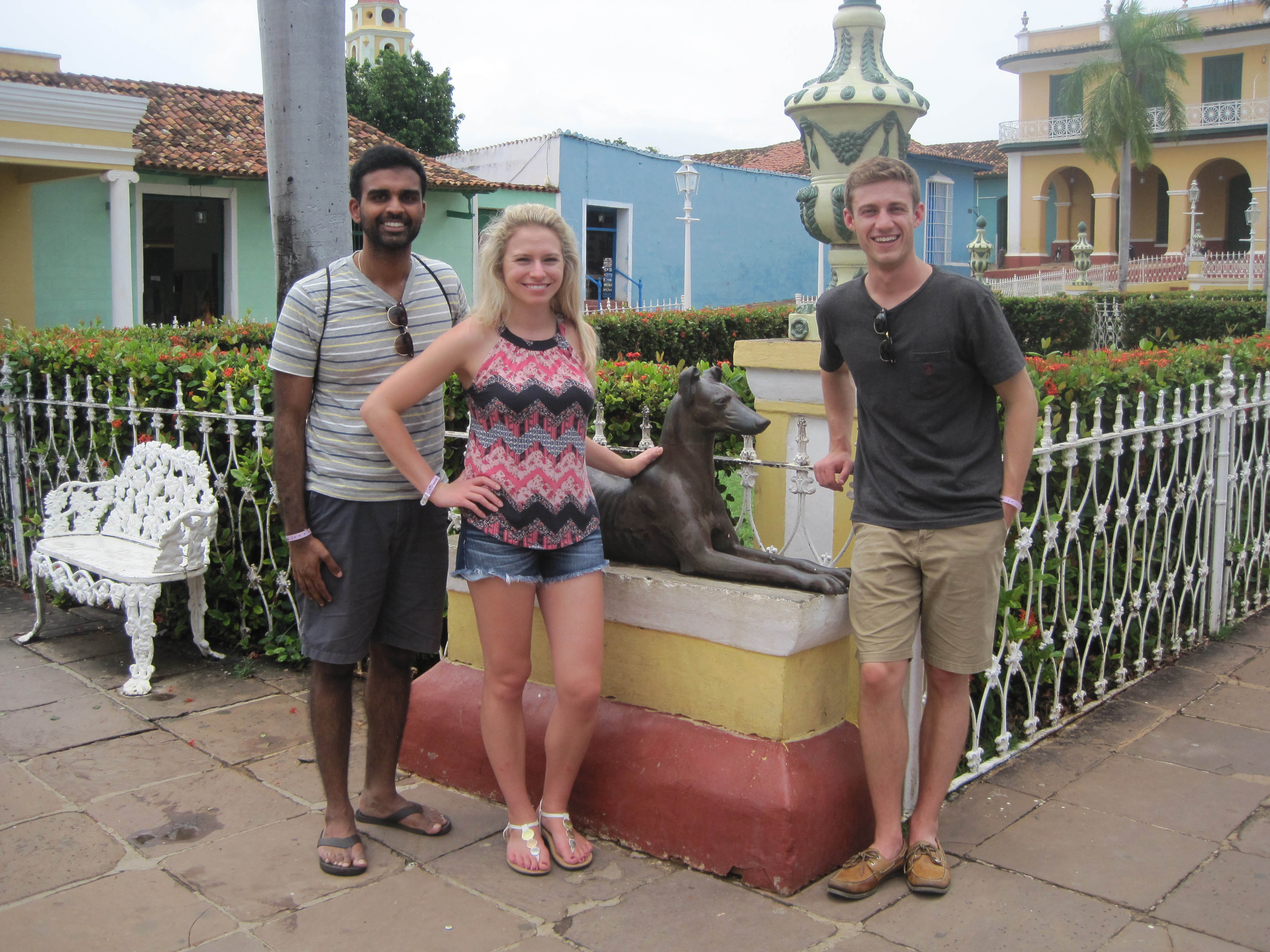 Visiting Cuba -- Three SIU Carbondale students (from left), Sai Balasubramanian, Annamarie Beckmeyer and Kyle Whittington, stand next to an Egyptian dog in Plaza Mayor, in Trinidad, Cuba. They were among 29 SIU School of Law and University Honors program students who recently returned from a seven-day visit to Cuba. (Photo provided)

Students benefit from trip to Cuba

CARBONDALE, Ill. -- Southern Illinois University Carbondale students recently returned from a weeklong visit to Cuba as work continues to normalize relations between the United States and the socialist Caribbean nation.

During the visit, 29 students from the SIU School of Law and University Honors Program saw a nation undergoing transition, learned more about Cuba’s legal and health care systems and business community, and heard the desire of Cuban citizens to have more interaction with the United States.

Annamarie Beckmeyer, a pre-med student majoring in physiology and psychology, found Cubans, while proud of their leaders, to be very open to U.S. citizens.

“In traveling the countryside and meeting Cubans you realize the ideological differences we have are superseded by our commonality of being people,” Beckmeyer, a senior from Hoyleton, said. “They too have family that they care about, dreams and aspirations.”

Talks of lifting legislative restrictions on trade and reopening travel relations have continued to move forward following President Obama’s announcement of normalization of relations between the two countries in December 2014. “I think the most encouragement comes from interacting with Cubans -- they are ready to reconnect with the United States. As more people from the United States travel to Cuba and meet the Cuban people, I believe more Americans will be ready to discuss lifting the embargo as well,” Beckmeyer said.

The trip was part of a course “Legal Globalization and Comparative Law: Cuba,” and “Global Citizenry and the New Cuba,” taught by Cindy Buys, a law school professor, and Melinda Yeomans, associate director of University Honors. The class met for two-and-one-half weeks and included lectures and readings about Cuban history, the country’s health care system, and the embargo, prior to leaving June 4.

This was Buys’ third trip to Cuba; the first two were in 2006 and in 2014. As a part of the class the students, who paid for the trip themselves, were required to keep journals detailing their experiences and write a paper.

There is an “obvious change” in rhetoric and tone, Buys said. In 2006, there were pro-Fidel Castro and anti-U.S. billboards; in 2014, the anti-U.S. messaging was gone.

“Much of the propaganda we saw the last time wasn’t there,” she said. “The message that the government is conveying to its people has really changed. That does not mean they still aren’t proud of their revolution and some of the things they have accomplished in health care and other areas. But you are not getting the same anti-U.S. propaganda that you used to see.”

“This unique opportunity to experience Cuba, through its rich history, people and architecture was a once in a lifetime opportunity as we know the country is on the verge of significant change,” Stettler said. “I believe students gained a new understanding of how as a society Cuba has preserved its past while working to move forward for the advancement of its people.”

Kyle Whittington, a senior in biological sciences with a pre-med focus, said compared to other Caribbean islands he has visited, Cuba was in “pretty good shape.” Whittington, who is from Elkville, said Cuba does have infrastructure issues and poverty but nothing like impoverished areas in other countries.

Whittington came away with “a real sense of respect for what dedicated individuals can do.” He noted that a reading initiative Castro launched after the revolution moved the country to one of the highest literacy rates in the world. “Literally almost everyone can read and write. While by no means should we celebrate Castro, we have to respect what he has accomplished,” Whittington said.

He said Cubans showed “genuine interest” when they learned their visitors were from the United States.

“I truly believe that the Cuban people are receptive and excited to the idea of having normalized relations with the United States and once we reconcile our differences, I think there is no reason why we should hold on to this embargo that hurts both parties,” he added.

Sai Balasubramanian, a second-year J.D./M.D. student from Plano, Texas, said the course enabled him to learn more about the nation’s “intricate legal and medical systems,” which are much different than in the United States. Cuba’s legal system reflects socialist jurisprudence and legal theory while the health care system provides “generally acceptable measures of care at free or subsidized costs.”

Balasubramanian said the trip gave him a new perspective, challenged prior perceptions and raised questions. “This trip provided me that insight, as it forced me to look at the Cuban government and lifestyle from an insider perspective, and ask deeper, more relevant questions; for me, this is what constitutes successful culture study.”

Cubans are beginning to learn more about market-based principles and capitalism, with many opening their homes as bed-and-breakfasts and restaurants, and selling crafts to tourists. The government has designated at least 200 areas in which Cubans can open private businesses. Last year was the first time that Cubans paid business taxes, Buys said.

Yeomans said a striking aspect of the visit was the appreciation and respect that the Cubans and students had for one another with open-minded discussions and a free exchange of ideas and perspectives.

“I believe much goodwill and understanding were generated from the discussions students had with lawyers and doctors throughout our trip,” she said. “Students took back a beautiful experience of Cuban culture, the great friendships they built with each other, and a respect for intercultural exchanges like ours that support healing and new models of cooperation.”

The collaborative effort of the trip demonstrates “what is possible when departments are willing to share resources and build programming that benefits students,” Yeomans said.

Jayci Noble, a second-year law student from Murphysboro, said she was interested in the course because of the recent moves to re-establish diplomatic relations and loosen the travel policies. With little internet access, there were few distractions, which enhanced her ability to enjoy the Cuban culture and society. The trip also provided the opportunity to meet with Cuban government officials, university professors, lawyers and judges, many of whom expressed an interest in seeing relations between the two nations continue to improve, she said.

Buys agreed that the Cuban people are ready for improved relations.

“The embargo was put in place to express the U.S. displeasure with the Castro regime and to put pressure on the Cubans to change and become more democratic. It’s been 60 years and it hasn’t happened, so clearly it didn’t work,” she said. “Maybe engagement is a better policy at this point to win over the hearts and minds that democracy would be a better way forward.”