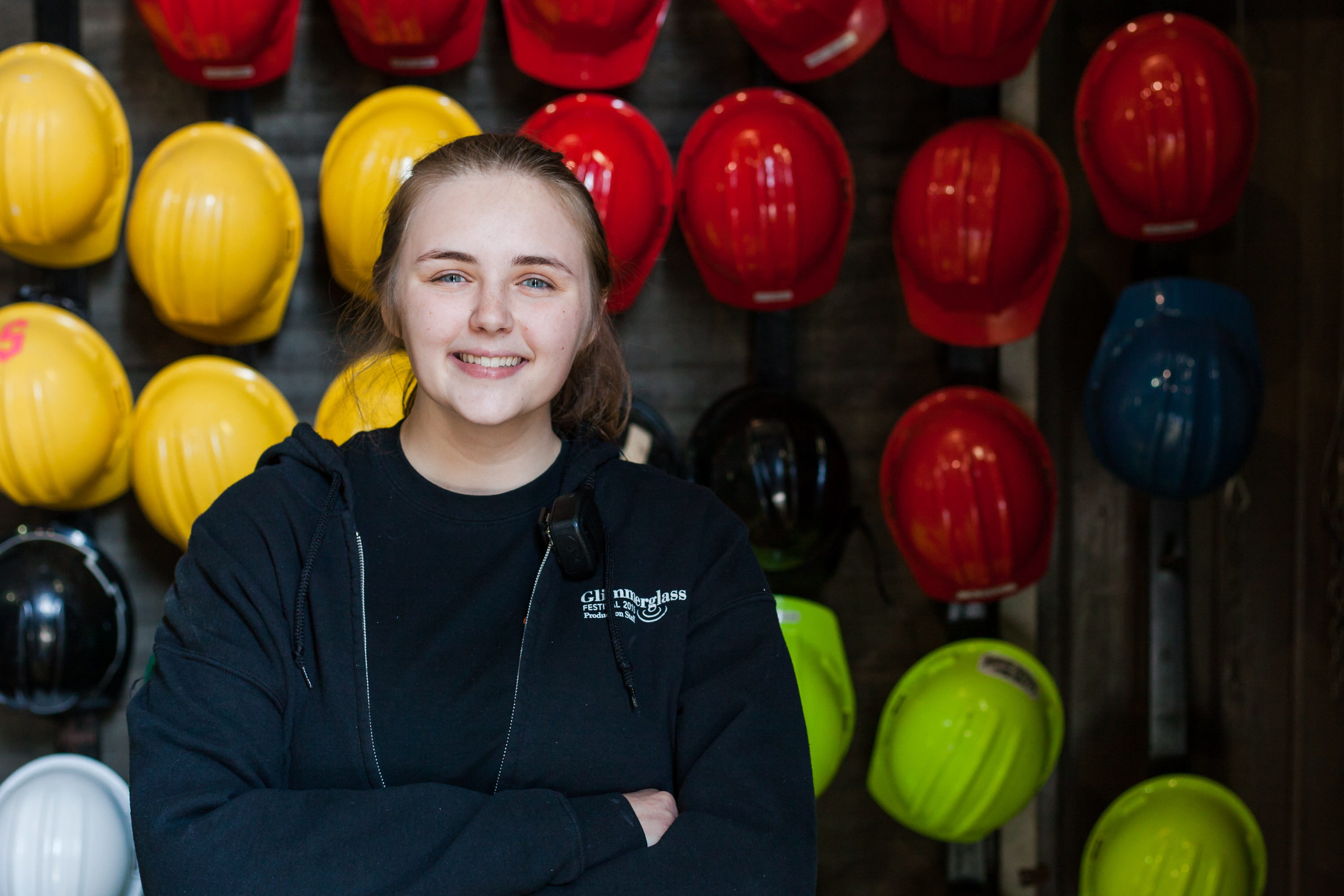 Theater grad gets a jump on her career

CARBONDALE, Ill. – She started out as a backstage dog care ninja and now she’s joined the Glimmerglass Festival in Cooperstown, N.Y., the second Southern Illinois University Carbondale theater student to do so in as many semesters.

Samantha Forehand graduates on Saturday, May 14, but she’s already on the job at Glimmerglass, having begun her new job before commencement ceremonies. In fact, she’s already logged in a proud on-the-job-moment as safety coordinator for Glimmerglass.

“I was conducting orientation and taught 20 seasoned practitioners proper respiratory use and more than half the people in the room realized they had been doing it wrong for several years,” she said. “There are many dangers associated with creating theater and in the entertainment industry in general -- I am truly proud that a position like mine exists in this company and that I get to take on this job.”

It’s a big step from her first backstage job where she was in charge of keeping track of the live dog used in a middle school production in her hometown of Edwardsville, Ill. She was 11 years old then, and by the time the production was finished, she was hooked on backstage theater.

“My initial thought was how insane all of the performers were for wanting to be onstage when there was a way cooler job where you get to wear all black and, to my 11-year-old mind, be a ninja,” she said. “From that first show I couldn’t get enough. I still focused on getting good grades, but my passion was very obviously theater production. There was nothing else that mattered.”

Forehand worked as a theater technician in high school productions and even made money doing so. If she wasn’t hooked before, making money doing what she loved was the final clincher. Despite advice to the contrary, she decided to major in theater. She chose SIU because of its reputation as a strong theater school and because of the faculty members she met.

“They made it very clear right off the bat they were there entirely to facilitate my learning and were very willing to adjust aspects of the classroom experience to suit my area of theater production,” she said.

Many SIU students intern at summer theater productions and Forehand was no exception. During her first intern evaluation, while she and her boss discussed her career, she realized she really could make a career in theater production, that it wasn’t just a notion or a kid’s dream. She also learned that it’s not an easy job – 12 hour days, six days a week are not uncommon, nor is burn-out. Learning that didn’t faze her a bit – it only made her more excited to prepare for opportunities that surely would come her way, as one did at Glimmerglass.

Before she even arrived, Forehand had a friend waiting at Glimmerglass. SIU alum Kyle Ludwig, lead carpenter for the company. Like Ludwig, Forehand interned at Glimmerglass before being hired there. Both Salukis made their Glimmerglass connection through Bob Holcombe, formerly a faculty member in the Department of Theater and now the owner of Renovation Professor LLC, a company that helps homeowners with remodeling projects.

“SIU has a reputation of producing topline theater technicians,” Forehand said, noting that another SIU student, Audrey Foland, a junior, will intern at Glimmerglass this summer. “SIU is really great about teaching their students to meet industry standards. One of the biggest things that sets a person apart when they walk into a theater is their competence in these standards because it sets a professional tone.”

J. Thomas Kidd, chair of the theater department and associate professor of directing and acting, said SIU works hard to keep good connections when it makes them.

“Once we make the connection with a company, and they know we continue to be a good source of well-trained students, that’s a valuable career and intern resource for our students,” he said. “We address career preparation right from the start with our students. We want them to attend conferences and to secure internships from the first year they are here. Theater is an applied degree – there is no theater degree without a theater, so our students have opportunities here.”

Kidd noted that students also benefit from the McLeod Summer Playhouse, the professional theater and SIU affiliate that takes over McLeod Theater in the summer.

Thomas Fagerholm, technical director, production manager and assistant professor, worked closely with Forehand from about her second year at SIU. She was set apart by the intensity of her drive. For example, she overhauled the department’s handbook, a task that set the foundation for her current job. And she presented research on file sharing and storage, a serious issue for theaters that need to make scripts and instructions available to a large group of people, at the 2016 SIU Undergraduate Creative Activities and Research Forum for which she tied for first place in the art and art design category.

Fagerholm said he’s seen Forehand grow from a shy backstage technician to a leader he expects will continue to climb in her chosen profession.

“I could not be more grateful that I was stubborn and stuck with my dream of working in theater no matter how many people told me it would be an impossible career choice,” Forehand said.

The Glimmerglass Festival includes four major productions a season and a wide variety of other presentations, productions and special events.